Every month I’ll look back at what we’ve been reading together and separately. For reference, my boys are 5, 3.93, and 2 years old. Also, my children can’t read yet, but they’re excellent picture-lookers, so that’s what they’re doing in these photos. 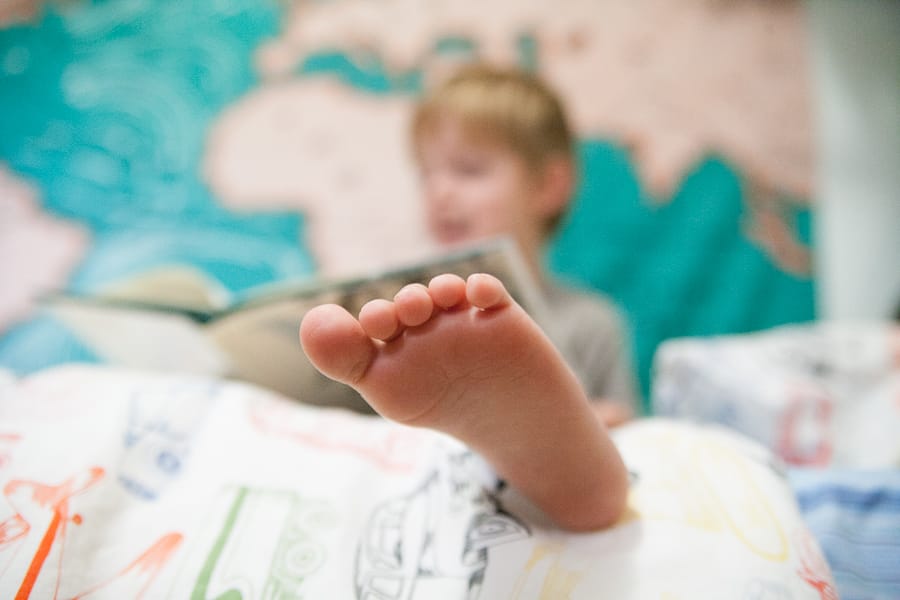 This month was interesting for a couple of reasons.  The first is because we spent a lot of time outdoors, so I feel like we didn’t really do as much reading as we usually do. The second is that I took the kids to the library for the first time! I admit that I have been too chicken to try going since I tried to take two-year-old Ephraim and six-or-seven-month-old-Clive who was just hard to take anywhere. That wasn’t an awful experience, but it scared me enough to not even consider taking Clive to a library for a long, long time. Over three years!

But I have so many, many memories of the library here that I knew I wanted to start taking everyone as soon as I could. And–Clivey honey, I love you dearly–but two-year-old Anselm and three-month-old Elvie together are easier to take places than Clive was as an infant. So I was feeling fairly confident.

We went twice, once with just three kiddos while Ephraim was in VBS, and once with all four because yes I am That Mother.

a note of general snobbery

Can I just say how very, very long it’s been since I’ve been in the children’s area of a bookstore or library? Almost all of our books have either been in the family forever, or else given to us or found secondhand. The sheer amount of children’s books available is staggering! And frankly, a lot of them were disappointing. I know that I’ll sound like a snob, here, but I generally try to avoid kid books that are overly simplistic or poorly written. If I can’t enjoy reading it as an adult (and the chief Reader Of The House at this point in our family history) then it isn’t really a very good book; not because I’m just an exceptional judge of books, but because the best books transcend age and are enjoyable for everyone. Think Dr. Suess, A.A.Milne, C.S.Lewis, Maurice Sendak, Shel Silverstein.

So, picking through the proverbial haystack of books to find the few needles was something of a task. I was glad that the kids were distracted by the puzzles and train set there so I could focus on looking for something I actually wanted to take home. As it was, we had a couple of duds, like the counting book that started out wonderfully but abandoned its strict rhyme and meter scheme three-quarters of the way through the book (that one was so awkward to read, though Anselm loved it) or the re-telling of The Snow Queen that managed to make the vibrant story I remembered from my childhood into a dry and boring summary. That last one was such a disappointment! We read it once and then I put it back in our Library book bag. I’ve found a copy of the fairy tale that I used to have as a kid on Amazon and will probably just get that.

Despite our duds, we still had some real favorites this month. These are books that were enjoyed by everyone.

the little engine that could (watty piper)

This is one of those books that I had apparently completely forgotten ever existed, even though I read it as a child! We brought it home from the library and read it at least five times every day while we had it. Anselm in particular was obsessed with it and asked to read it over and over and over, but the older boys loved it too.

I eventually had to hide the book from Anselm because he would carry it around and handle it a little too roughly. I guess this means we need to get our own copy.

This is one of those lovely little books that has a good message but doesn’t exhaust itself in being overtly didactic. It’s just a lovely story, but both older boys understood what made that one little engine different without the book self-righteously drilling it into their heads. 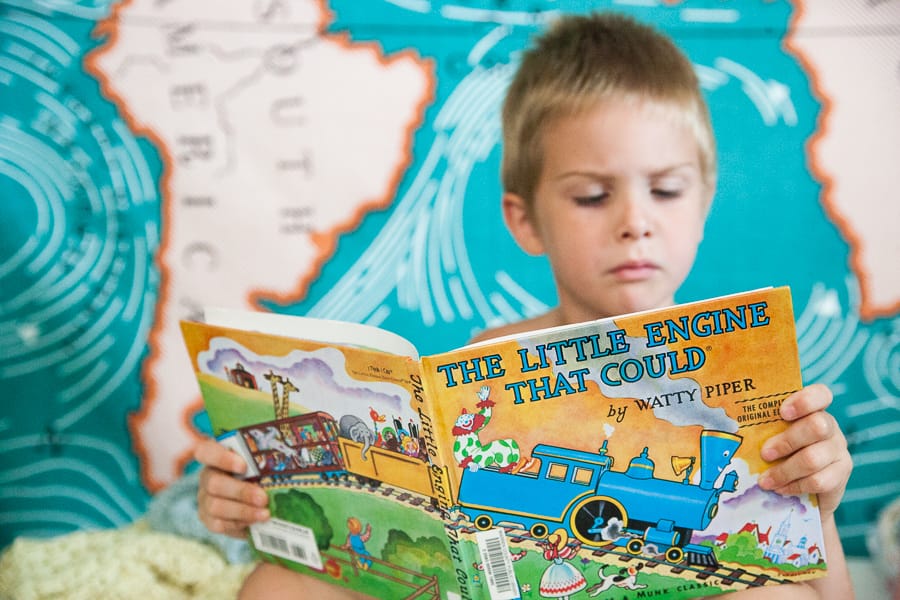 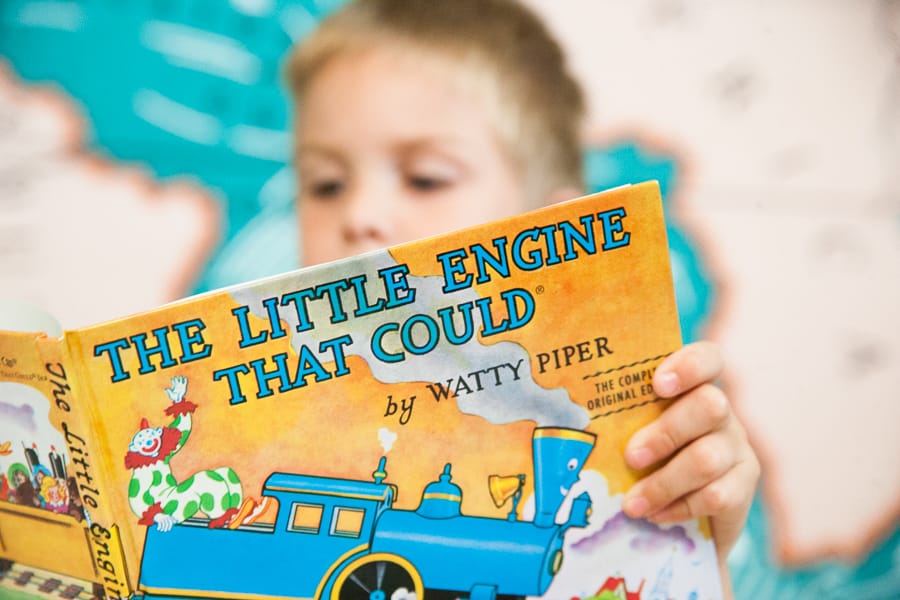 This has to be the very best retelling of Jack and the Beanstalk that I have ever read. I liked it so much that I showed it to my aunt over dinner, and she loved it so much she had to read it out loud right there, and we all laughed over the quaint sayings like cold as doorknobs or as independent as a hog on ice. The kids laughed right along, too.

I’d never heard of James Still before, but after looking him up I’ve learned that he was from Eastern Kentucky, which is probably why I liked his style so much.

It’s not easy to find a picture book that the grown-ups like as much as the kids, so this is probably one I’ll be buying to add to our home library. I really recommend it, though it begs to be read aloud with a strong southern accent, so if you haven’t got one yourself (or can’t fake one) it may be worth your time to find someone who does to read it for you. (I’m only partly kidding.) Maybe I’ll do a video of Lula Mae reading it. (That’s a long story and inside joke, but to the three or four of you who know what that means, I’m winking right now.)

This is the first of Anselm’s Very Favorite Books that he latched onto this month. We have a few books from this series (Cool Cars, Tough Trucks, a boat one and a train one whose titles escape me at the moment) but Tough Trucks is the only one that’s been unpacked. Anselm likes this book, I’m sure, because it’s got TRUCKS in it. Maybe he likes the rolling rhythm of the words. I know that’s why I like it. There is something about poetry that’s just easier to read…over and over and over. We read this book A LOT this month. In fact, I went to get it to take some pictures of it, but I couldn’t find it. It may have been hidden from its biggest fan…I can’t say for sure.

This was number two on Anselm’s list of Very Favorite Books for the month. Anselm doesn’t talk a whole lot (or, he didn’t talk a whole lot before this month) but he really loved making all the sounds in the book. I hadn’t thought about it before now, but maybe we owe partial thanks to this book for his explosion of language this month. Hum!

This was Number Three on Anselm’s list of Very Favorite Books. I love these old Berenstain Bears books, but I really, really dislike the newer ones that were published while I was growing up (which, unlike The Little Engine That Could, are not very good about teaching without beating you over the head with The Moral Of The Story.) We have read this one so much that the cover has fallen off. If you ever sat down when Anselm pleaded with you to “wead book-book” you could be sure you’d end up reading all three of these titles on his list.

This has been our nightly chapter book read for the month. And it’s taken all month! The chapters are somewhat short, but some nights I would read only half. I think two nights we didn’t read at all because we got to bed late. Even so, most nights we read a whole chapter, but we’re still a few from the end.

I bought this book at a yard sale nearly seven years ago because I had never read it–I had only seen the film, which terrified me as a child (and I still can’t really watch it now, as an adult.) Like all book-movie relationships, the written form of The Neverending Story far surpasses its visual counterpart, particularly since the movie only covers the first half of the book! It’s also a very fast-paced story. I didn’t have any children when I read it that first time, but I always though it would make a great read-aloud for boys, especially boys who didn’t like to read. Since we read it at bedtime, all three boys listen to it, but Ephraim is the one that is enjoying it the most.  Clive (who is almost four) listens, but I’m not sure he really gets what’s going on. Ephraim pays very close attention and is always the one who complains when we have to stop reading.

This book has some scary bits (anyone who’s seen the movie can attest to that) but we haven’t had problems with nightmares or anything with the boys while reading it.

I started reading The Complete Father Brown Mysteries a few days ago–so to slip right underneath the deadline for this month. Because I realized last week that I hadn’t read anything for myself this month! So…you know. That’s all I have to say about that.

Here’s last month’s post in case you need to catch up!

the toddler who walked by himself
four months (elvie kathryn)