The problem with monthly posts is that they serve as awful reminders of how quickly time flies! Here’s a few things we read (and enjoyed) in August. For reference, my boys are 5, 4, and almost 2.5 years old. 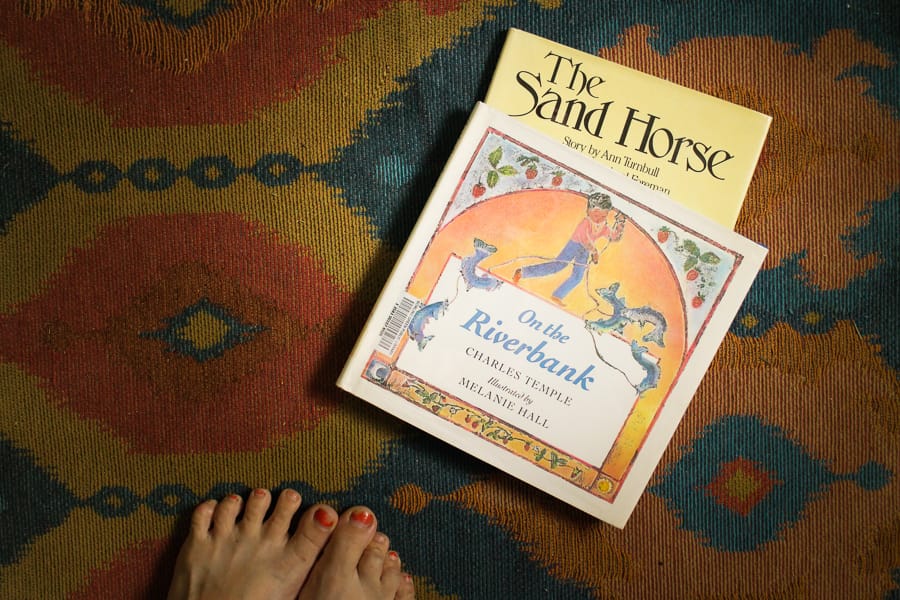 on the riverbank (charles temple)

Oh, but I loved this book. I had to read it through a couple of times to get the rhythm down so I wasn’t pausing awkwardly while reading it, but it has such an interesting rolling cadence and a simple, lovely way of describing the family trip to catch catfish. It’s told from the perspective of the little boy in the family, and it’s educational in that real-world sort of way, not saying this is how you catch catfish but telling the story and letting you observe and draw the conclusion yourself.

It was just after reading this bit that Clive and I both said aloud, “I’m hungry!”

I wish I could type up the whole book but you’re just going to have to get it for yourself and read it. Be sure to practice a couple of times before you read it out loud. 😉 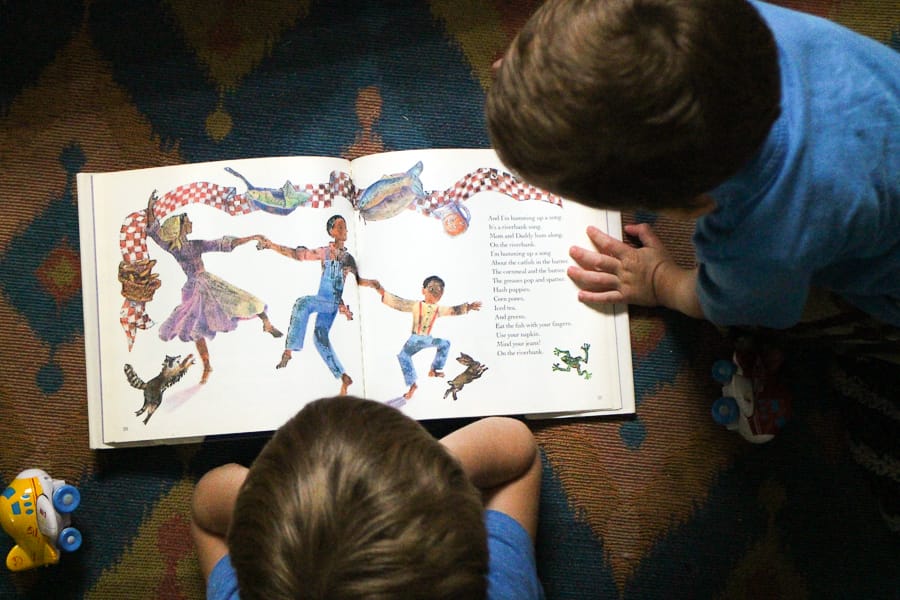 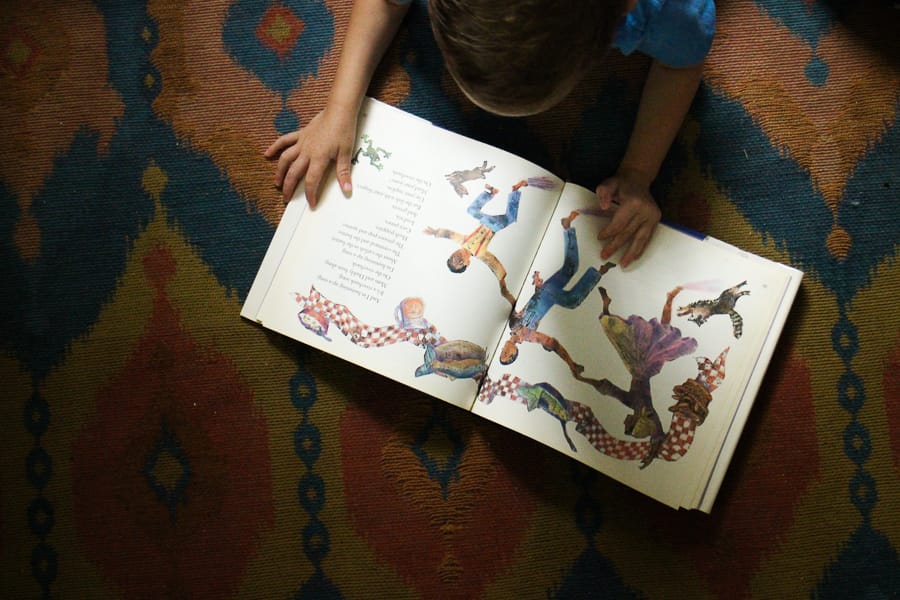 This book’s a silly little story with a very Milne-ish manner of throwing extra details and lines into the narrative that make you stop and chuckle. Pedro is a crocodile and George is an alligator that everyone mistakes for a crocodile, and they set off together to set the record straight. The illustrations are done by the author, too, and they also hold a few extra details that are fun to look for. I have only two complaints about this book: I wish the font was different, and I wish it were longer.

I found this book by accident at the library, but was so happy when I did, because I have vivid memories of reading this book myself! And I do mean this book–unless of course it’s been replaced over the twenty-five years or so since I read it for the first and only time. Though I don’t think it has, because the envelope for on the front for the date due slip has the year 1990 on it. I remember reading this book right there in that same library, when the children’s section was upstairs, not downstairs, and I found the book and read it right where I was standing. I could lead you to the very spot if that children’s area was still there, but it unfortunately is not.

As far as I can recall, I never did check out the book or read it again, but I have always remembered standing there and reading it in the library. It’s where I learned the term white horses for the white-capped waves on the sea. This simple story of an artist’s creation on a beach, and what happens to it when the tide come in, captivated all of us as we read it.

We started reading this third Ralph book at bedtime in the evenings, one chapter a night, and then finished it one Sunday afternoon with four of us (Ephraim, Clive, Elvie Kay and myself) all cuddled up on my bed reading the last half of the book because we had to! And we read until it was past dinnertime and Anselm had taken our distraction as an invitation to color the living room rug with a brown marker. We (everyone but Anselm) enjoyed this book far more than Runaway Ralph . I think it is because Ryan, the main human character and friend of Ralph, is just a much more likable character than Garf, who was the main character in the previous book. And I think the boys were able to follow the plot more easily this time, too. When we read them again, I will probably skip that second book.

I typically write here only the books that we really liked, but I suppose I should include this one precisely because we didn’t. Or rather, the boys didn’t.

We had had such a good time with Kipling’s Just So Stories that I thought we’d try The Jungle Books too, but nope–we didn’t get anywhere. I read Rikki-Tikki-Tavi first and they loved that (who wouldn’t?) but I tried to start Mowgli’s Brothers and they zoned out. I think the descriptions and things were just too long for them to follow and their minds wandered; I knew when I said something about Shere Kahn and Ephraim asked, “Who is Shere Kahn?” even though I had just said who Shere Kahn was that this probably wasn’t the book for us at this time. So we’ll try it again in a year or so, maybe sooner, but try it again we absolutely shall, because it’s just a great book. In the meantime, I shall read it to myself after I am tired of falling asleep to another Father Brown Mystery.

I tried this book as a whim, as we had it in our library and I had never read it, and I thought a dragon story would be fun for the boys. I’m really surprised that they listened to it as well as they did, as I thought a lot of it would go over their heads (and a lot of it probably did). But it was nearly impossible to stop reading it each night because Ephraim would vehemently protest–and then sulk–when I insisted that it was a good stopping place (there are no chapter breaks) and that everybody needed to go to sleep, anyway. It’s a short book and could easily be read in one sitting by a grown-up, I think.

I had to stop and explain a few things as I went–particularly when some subtle joke in the narrative would make me laugh out loud, but they hadn’t understood. Also it reminded me that I need to brush up on my Latin pronunciation. I can’t say I really recommend reading this to a four- or five-year-old,  but we did and it worked for us, and it’s one of those that we’ll read again in a year or two and they’ll be able to enjoy much more.