So, how was your Christmas and New Year?

Mine was great, but I didn’t document much, because my blog crashed Christmas morning and just got back up on New Year’s Day. What a way to enforce a hiatus, right?

We arrived back home from our travels yesterday, accompanied by much weeping and gnashing of teeth (no one likes to leave Kentucky, and at this point in pregnancy sitting in a car is tortuous for me.) We’re all poised to dive back into Real Life tomorrow, with Jeremy going back to teaching and the boys and I…well, we never really stopped doing what we always do. But the advent of 2016 has left me with a very keen awareness that Life As We Know It is set to change drastically in about two months, and so I hope to streamline and solidify our routine over the next few weeks in anticipation of that change. In case you’re not following my train of thought, I’m referring to the imminent arrival of Miss Elvie Kate, whose nursery has a to-do list that’s longer than I’d like. 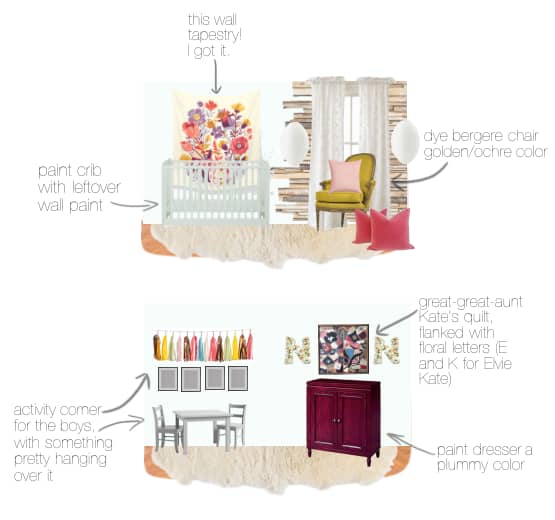 That’s what it’s supposed to look like, though. Hopefully.

I told someone the other day that I hadn’t made any resolutions, because I was having a baby and I thought that was enough to worry about. But after thinking about it, I decided there are a couple of things I would like to address. Not really as resolutions, but more as part of the aforementioned routine streamlining. If there’s anything I know, it’s that if your days are jellyfish-like and squiggly and aimless, then bringing a newborn into the home turns everything chaotic. And if your days are somewhat scheduled and directed, then bringing a newborn in makes them kind of jellyfish-like and squiggly. In other words, it’s going to regress no matter what, but where you start from determines where you’ll end up. Jellyfish I can handle, but not chaos.

I’ll write more on this at a later date. Like tomorrow. Or maybe after I post this.

Blog problems and reality checks aside, it was a lovely holiday at the farm where I grew up, which I named Janderhil (sounds like yonder-hill) last year but never told anyone because I thought they would think it was silly.

It took only one week of sitting around for my nesting to hit an all-time peak of insanity. I painted two rooms in four days–first helping my aunt repaint her sunroom, then overhauling the boys’ room at their grandparents’ house. I love painting, but I think I can safely say that I’m done for a while. Maybe a week or two. There’ll be a post on those rooms, too–but not today, because I’ve just realized I left my card reader in Kentucky.

We also cleaned out a ton of stuff from the hamhouse, the basement, and also the closet in my old room, which was very satisfying.

And the boys ran around outside a lot. I may have been the only person in the South that was happy for that unseasonably warm Christmas weather–I really, really hate the cold. It gets words when I’m pregnant. I know that normal pregnant women get hot, but I get cold. My summer pregnancy was my most comfortable one.

So, that’s the update from these past couple of weeks. Did anyone else experience a forced Holiday Hiatus? Does anyone understand what I mean when I say that a day is jellyfish-like? Anyone got any resolutions to share? I feel like questions are the way to end an aimless, rambling post–other than just pushing the “publish” button, that is.