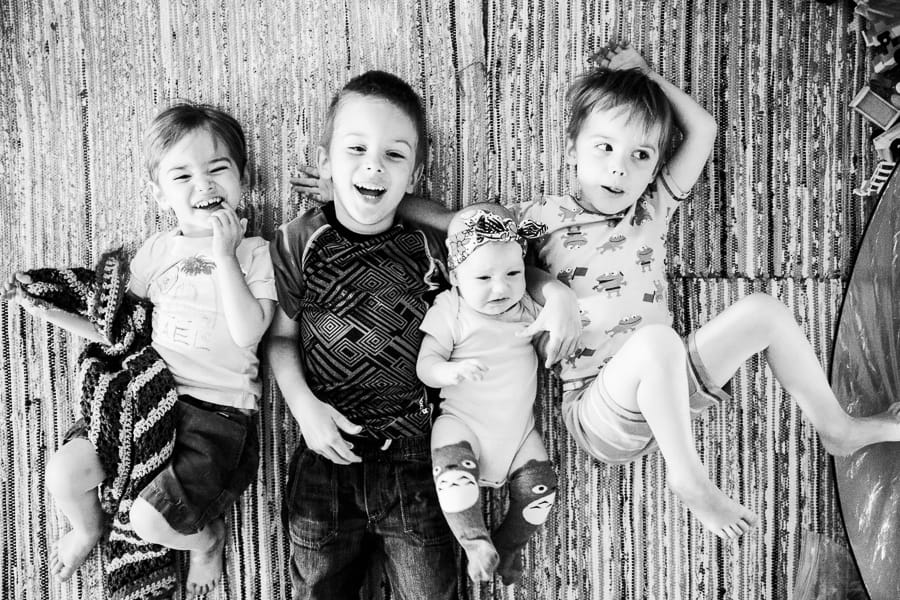 Saturday was a day for a special errand–and because we’ve been reading a book about a similar errand over and over recently, let me describe said errand thusly:

We ate our honey
We ate a lot
We had no honey
In our honey pot.

In Atlanta we got our honey from Costco. Now, in Kentucky, we get our honey from the next county over, where the hills roll steeply and you have to drive slowly in case you pop over the top of one and happen suddenly upon a horse-drawn buggy going down the other side. Every weave and bend leads you to another greenhouse, another produce stand, their hand painted signs boasting Sweet Corn or No Sunday Sales. It’s the drive that I love, though I love to stop at the little stands too, or I would love them if I could. It was a hot day and I had all four littles with me. 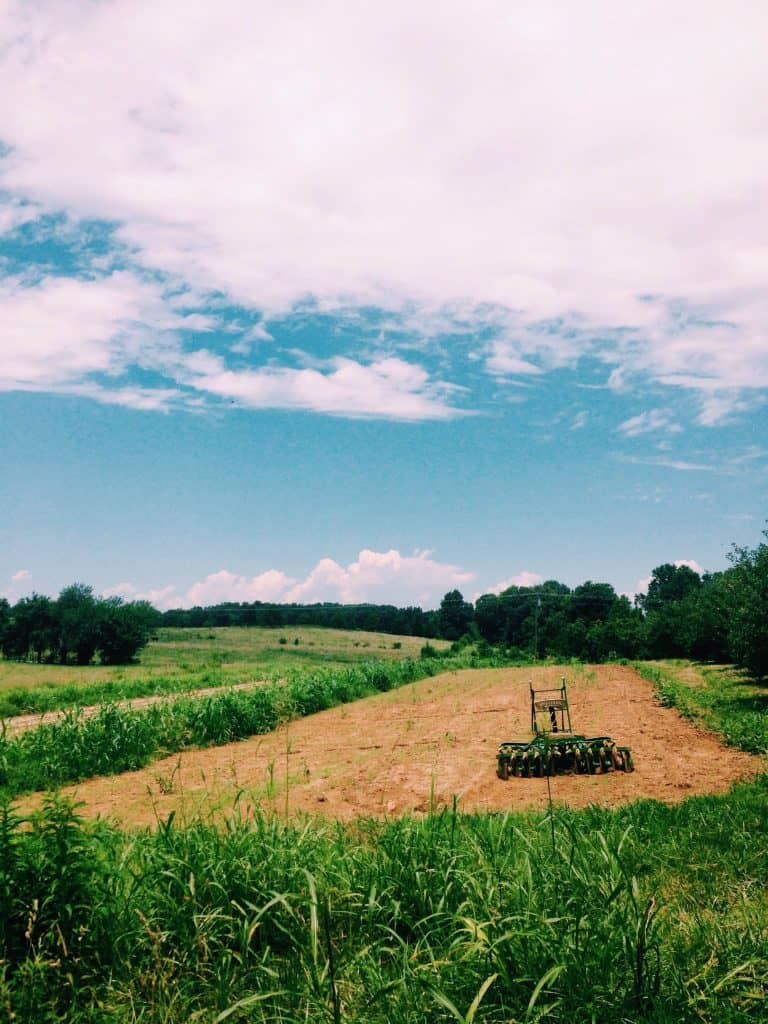 I don’t mind taking the kids out places. Most trips are quite boring, done solo–I welcome the interest and variety that going out with the children brings. Now that we’re up and living by family, I do have the opportunity to leave everyone with a sitter while I run errands (and I do from time to time) but I’ve tried, as much as possible, to keep taking everyone along with me on trips to town. Well–the big trips, anyway. Because we all learn on those big trips–errands are, in a lot of ways one big educational experience for both my children and myself. The little trips, though? Those are pretty unremarkable. Hardly worth the effort of all the unbuckling that one has to do to let that many small children out of a car.

As I drove Saturday through Amish country and closer to our destination, I knew how quick the errand itself would be, and, in a way, I dreaded it. I wished I didn’t have everyone with me so I could jump in and out quickly. I wished I could just leave everyone in the car. (It was way too hot for that.) I wished that somehow there would magically be a drive-thru (ha!) and that none of us would have to get out and it would be the quickest Honey Trip ever.

But I turned left at the Jam House sign and drove, slowly, down the gravel driveway towards the little building where the family sells their jams and relish and sorghum and honey. And I unbuckled everyone, led them across the gravel lot, rang the bell and went inside, looked at the different types of jams while my kids interacted with the store owner, bought our honey, blackberry jam and plum jam, led everyone back to the car, buckled everyone back in, and we left. I think it took fifteen minutes, total, and two-thirds of that was just getting everyone out of the vehicle and then back into it again. That’s it.

the meaning of it all

I wish I knew why, exactly, I felt compelled to write about this little trip. The first draft of this post took on a very illustrious air–it had Reasons Why I Think It’s Important to Take My Kids Grocery Shopping; it had some (subtle) thoughts on ways to make errands a learning experience. It was all very Grand and Important and Full of Wisdom (or at least I’d like to think so.) And then at the end, I was left with this little, insignificant, unremarkable errand that was so anticlimactic and didn’t really demonstrate any of the things I had just written about. In the end, I had to delete them all. They just didn’t fit.

What is it about this one little honey trip? It wasn’t even worth instagramming because the store wasn’t pretty and it’s generally rude to photograph the Amish as if they were a zoo exhibit, anyway. We didn’t grasp any life lessons while we were there–at least not that I know of. Ephraim did try to sneak one extra jar of honey into our purchase, but as it was fairly obvious, the discrepancy was caught right away. Nevertheless I keep thinking of the insignificance of the whole affair and my reluctance to embark on it with all of the children in tow.

There’s an incredibly isolating element to motherhood, and stay-at-home-motherhood in particular. I know many times I photograph and post and share solely as a way to make sure I’m seen. To somehow prove that my work is remarkable and praise-worthy, or at the very least swoon-worthy, if I can arrange the surroundings properly, of course.

I’ve thought a lot recently about my role in and out of its context and how uninteresting it can seem when pulled from its prescribed place and examined on its own. I’ve demonstrated (through music) how hollow things would be should that part be left out.

I think maybe that withholding unremarkable moments from my children–or, perhaps, depriving unremarkable moments of my children–could be a bit like skipping notes. Am I willing to include them in those things that seem insignificant–does it matter? Should it matter? I am asking because I am still not sure. If a mother brings her four children into a roadside Honey Store and the only person to see is an eldery Amish gentleman who won’t (I assume) be tweeting about it later, did it really happen?

I’m thinking that cultivating a willingness to take on those unremarkable moments is the best reason for them. 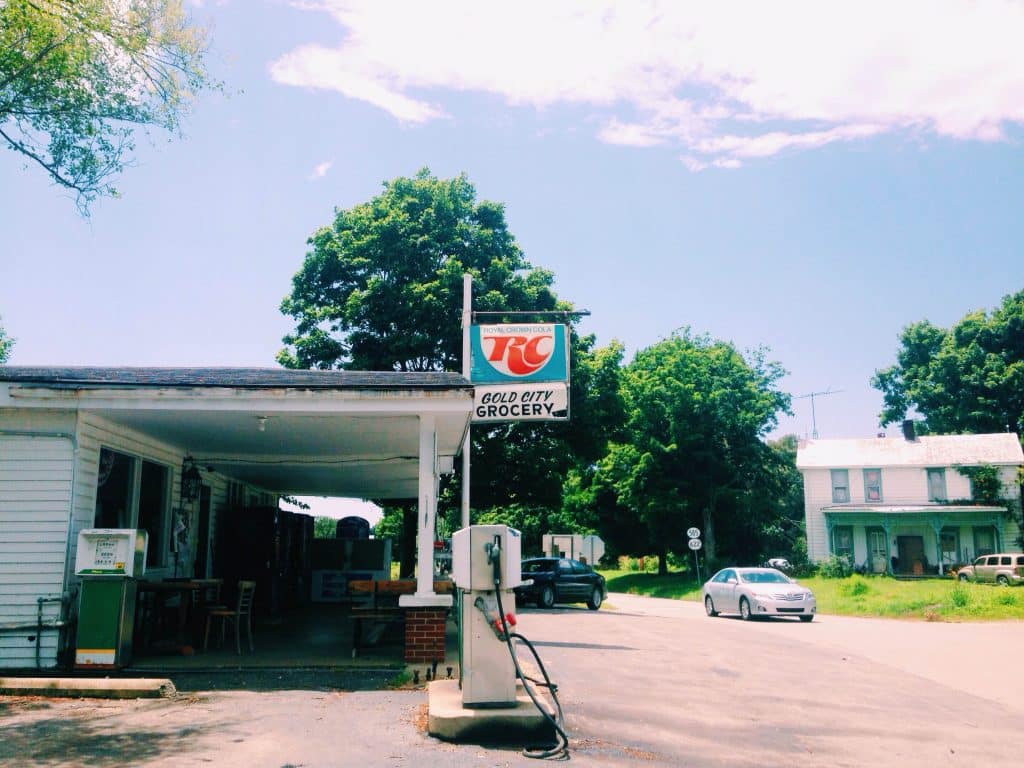 We ended our trip with something more obviously substantial–a stop at a little country grocery, the sort that my Granddaddy loved to go to for a bologna sandwich and an ice cream cone. You can tell it was more exciting for me because I took pictures of it.

I let the boys each pick something–Anselm picked a roll of powdered donuts (and took a bite out of each one before giving them to his brothers.) Clive and Ephraim both chose Ring Pops. I got an RC-Coca-Cola and a Moon Pie, because Kentucky. Elvie Kate respectfully declined any treats.

Lord, make me willing to engage the unremarkable with my children.