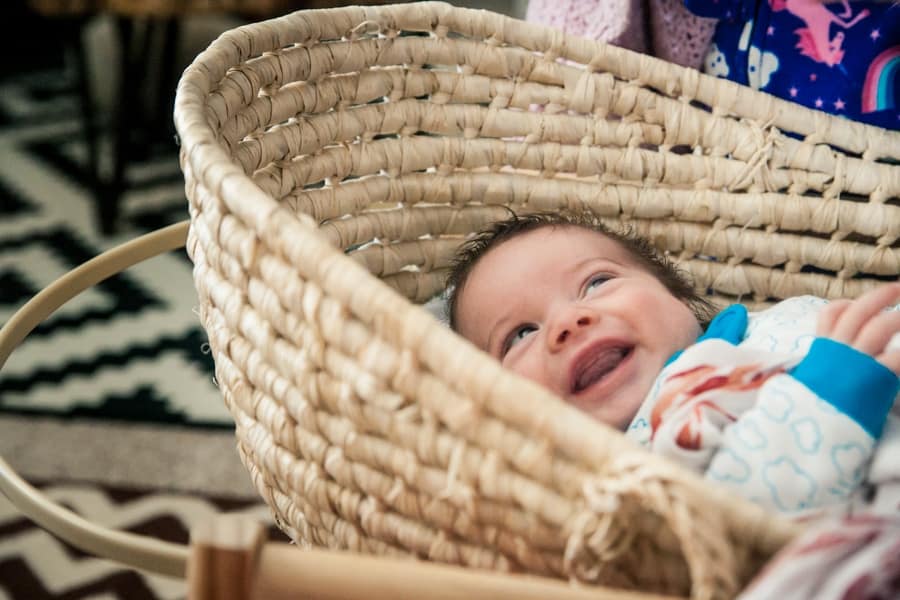 On that day he went in for his two-month-pediatrician visit, where we learned he was 12 lbs (so about two pounds shy of doubling his birthweight) and 23″ long. He got his first round of shots, which he barely cried for; he actually cooed at the doctor as she examined him. He’s the first baby to have not cried during his doctor visits at this age.

He’s become extremely social in the past month. Smiling and talking and a curious sort of hiccoughing-laugh have become his standard behavior during his as-yet-very-brief periods of wakefulness. He’s still on the very short end of the waketime stick. This is a fact that probably deserves a post of its own, but if you practice keeping your newborns on a routine, then you know what I mean. But between every feeding and nap there’s about five minutes or so where we have nothing to do but just talk to one another. At this time he kicks his feet, wide-eyed, and gets the Happy Snuffles (I’m sure you know what those sound like) and finally, finally, manages to work out a sweet little hoo! or maybe even a ghoo if he’s really excited. Sometimes he forgets how to say things and merely snuffles; sometimes he sneezes and that, for some reason, reminds him of how to use his voice. I’m not sure why this should be so, but it’s been the same for each of the children. 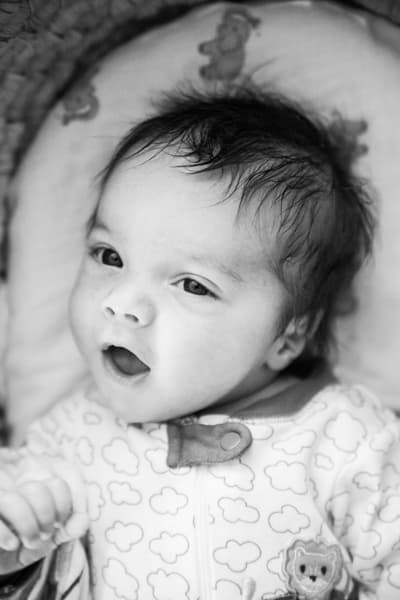 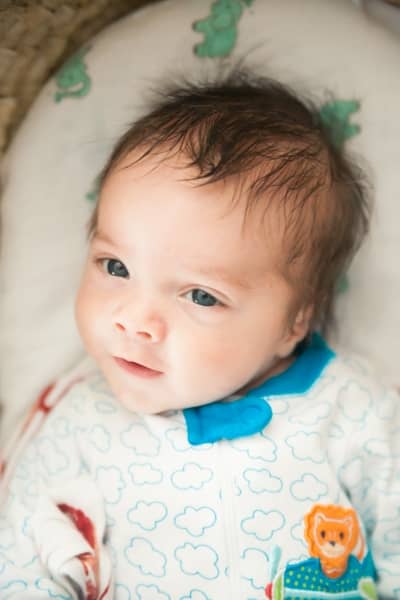 His hair is every bit as wild as it was on the evening he was born. He hasn’t lost any of it. It is laying down in these pictures because it is dirty. When it’s clean, it gets kinky-curly all over while wet, and then when it dries it stands straight up like he’s stuck his finger in an electrical socket. He’s the first baby whose hair I have had to gel down before we go out.

His eyes are staying in the realm of blue for now, and the little white pimple thing that he was born with on his lip has disappeared. His left eyelid seems to droop a little, like Elvie’s does. I’m not sure where that has come from hereditarily. Like Elvie’s, it isn’t covering his eye or impeding his ability to see, so it isn’t too much of a concern. He’s almost too big for his three-month sleepers, though by the scale he’s perfectly average–in the 50th percentile for weight.

This month saw his first Wonder Week, and he hit it with all the predictable signs: extreme fussiness, extra nursing, poor sleep. On the other side of this leap (Wonder Weeks are like mental growth spurts) he seemed to wake up out of the sleepy newborn stage, to become much more easily overstimulated, and he began really responding to things in his environment for the first time, like gazing at a window or making goo-goo eyes at the ceiling fan. He also became much more sensitive to noise, and now takes all his naps back in his bassinet in our room, rather than out in the moses basket in the living room.

Because (I suppose) he is the fifth baby, it took me much longer than normal to get him started on a routine. It was really actually desperation that drove me to it. And, predictably, once I did, he started napping much better (and has learned to put himself to sleep more often than not). We’ve also conquered the Witching Hour–thank goodness. And I can cook dinner now without him crying the whole time.

He still nurses around every four hours at night.

I’ve noticed that it is very easy for people to pronounce his name on the first try. This is so nice for him. Unfortunately, people seem to assume by his name that he is a girl. This is not quite as nice, but something I imagine will become less of a problem as he gets older and more able to shout “I’m a BOY” for himself. For my part, I usually let it slide.

As previously noted, Ephraim and Elvie Kay are absolutely smitten with him, and if he’s out and about at all they are immediately by his side. Elvie Kay always asks to “kissy Doh-Doh”, and the pitch of her voice gets higher depending on her proximity to her baby brother. Ephraim is always coming to check on him, obsesses over whether he is breathing (he always is) and wants to “see his eyeballs”, presumably to check and see if his eyes are still blue like Ephraim’s own eyes. Eldore responds to Ephraim the most out of everyone in the family, looking for him when he hears his voice and smiling and talking back more freely than he even does with me.