I have the day right and I have the months right, but after so many missed updates this year I keep second guessing myself and stopping to count and then recount again. It doesn’t seem right that we’re only two months away from Two Years Old, but then again I feel like she’s really older than she is. It has always been that way for me, ever since Clive was born. The children seem either older than they are or younger than they are, but never just their age. Maybe this is because they change so constantly.

Elvie Kay is in full-blown toddler mode, into everything and everywhere at once, both seeming to retain an inkling of what she ought and ought not do but then also disregarding it utterly. Sometimes I think wistfully (but not too wistfully) to when Ephraim was this age and I had little to do but make sure Clive got his naps on time and to police Ephraim’s every move. Elvie is fourth in line and quiet as a mouse, well aware (I assume) that I do not have my eyes on her at all times. I am very thankful that we live in a ranch-style house and I am not having to wonder where she is over two floors. I am also reminding myself that she is still only a one-year-old and perhaps I ought to re-train her for her playpen. And I am incredibly thankful that she does not yet know how to open doors. (Yet.)

She became a Big Sister back in Mid-November at the tender age of twenty months. She is ever so fond of her baby brother (whom she has christened Doh-Doh, an unfortunate nickname that seems to be sticking) and is forever trying to give him kisses, to lean over him affectionately, to swipe his pacifier (and bring it to me, after trying it out of course). She greets him with all manner of cooing and warbling and swooning over his baby-ness. (I would laugh except I know I do the exact same thing. He is awfully cute, and she is cute too, fussing over him.) 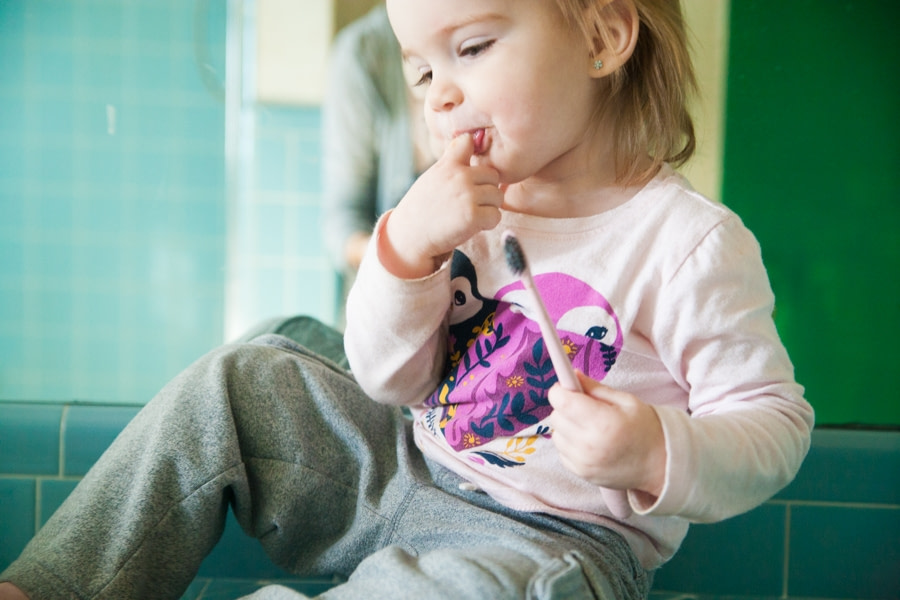 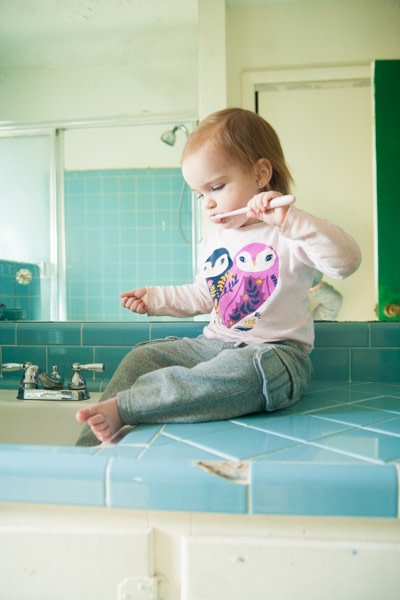 Her hair is long enough for a ponytail in the back, and her eyes seem to have officially stopped changing, though they still remain a color that I am not sure how to describe. I suppose they’re grey, but they often look green. Sort of an olive green. Maybe that makes them Grey-Green? Like the Great Grey-Green Greasy Limpopo River. They are lovely.

She’s a big talker, a big dancer, a big singer, and a big swinger (when she walks, that is.) She has finally come to terms with sitting at the table while Daddy reads the “bubble” (that’s Bible in Cakey-Speak) and loves to repeat history vocab with the boys while he reads our history book over dinner. She picks up all sorts of things during her wanderings about the house, including bits of poetry and songs that the boys are learning. And even though I have hardly been intentional about reading to her during this past year, somehow she has been able to dive right into (meaning sit through) much longer books than I believe I was even reading to Anselm at this age. She really has a remarkable talent for sitting quietly that the boys most certainly did not have at Almost-Two.

I took these photos while she was doing her “teef”. She loves to brush her teeth (read: mostly just suck on the toothbrush). She also loves to sit on the counter when I do my hair and makeup. Last week she watched while I painted my fingernails, her fingers twitching to pick up the polish even though she respected my command to leave it alone. I painted her thumb nail for her, much to her delight.

I would be remiss if I did not mention her somewhat volatile mood swings, simply for the sake of honesty and for myself, should I ever have another girl and wonder, on her twenty-second-month birthday, if Elvie were ever so moody and unpredictable. And here is my answer: yes. Yes she was, and she is, and that’s all I will put here for the meantime, Lord Bless Her.

But she is a silly thing; she is quick to laugh and to give a kiss, equally delightful and delighted by everything, except Daddy’s electric guitar and the opening scenes of Return of the Jedi, which she decided was not really worth missing bedtime over. (But that is another story for another time.)