Typing his middle name this morning made me smile. People frequently read that “I” as an “L”, and wondering why we would name a child Loan.

His whole name is difficult, I guess, judging by the number of people that still call him “ans-lum” instead of “ans-elm”. In a way, I guess it’s appropriate for him. Not that he’s difficult, himself, but he is a little unexpected and incredibly unique in our little family. What I mean is that Ephraim takes very much after me, and Clive is his father made over, but Anselm still puzzles us. Who does he look like? Where did that personality come from?

He’s a veritable Third Way in the Krans household, being no one, of course, but himself. He does really favor some qualities of my dad’s family–the Jarboes–reminding me a lot of my cousin’s son, and having the soul of a dissenter. He’s not exactly rebellious, but you can tell he enjoys pushing the boundaries. This is a Jarboe trademark. “It must be done in this way.” Well, why? Are you sure? This is Anselm. 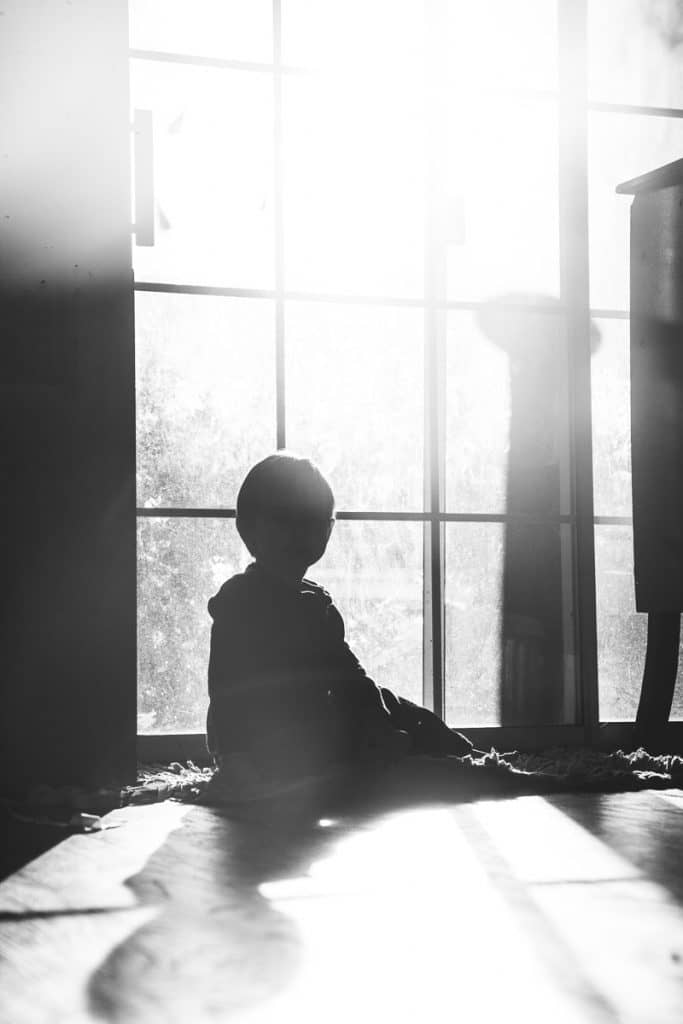 A few weeks ago I posted a picture to my Instagram of my second cup of coffee. In the corner of the picture is Anselm’s little hand, just waiting. He reached for the coffee, and I told him no, but instead of withdrawing his hand he just laid it on the table in the same spot. I’m not sure if he was waiting for me to not look, but he left it there until I made it clear that no meant NO and he toddled off to seek out some other task to which he could set his mind.

He’s easy-going and good-natured, though sometimes deceptively so. He’s obedient, learning the ways of the household by mimicking his brothers and listening to his parents, and slowly transitioning into Big Boy rites of passage like ditching the high chair for a junior chair at the table and learning to sit on the bottom step (and stay there) when it’s time to put shoes on and get in the car. He’s very interested in following his brothers into the bathroom and insists on sitting on the toilet himself (with the lid closed and all his clothes on.)

Then there are days when that little streak of…Anselm…comes through. A few days ago, he had followed me into the bathroom and asked for a drink of water from the cup we keep by the sink. Being otherwise occupied, I acknowledged his request and asked him to wait.

He didn’t like that answer, and immediately threw himself down onto the floor in a heap of crocodile tears, but it wasn’t long before he paused, mid-display, and checked to see if I was watching before starting off in a fresh wail.

I laughed. I couldn’t help it. It was so obviously contrived and fake–emotional manipulation at its finest. Upon hearing my laughter, his mini-tantrum halted immediately, and he stood and walked over to me and pinched me. Well, needless to say, that got nipped in the bud pretty quickly, and then he had some real tears to shed. But I can’t recall either of the older boys ever behaving this way. Anselm is something else. 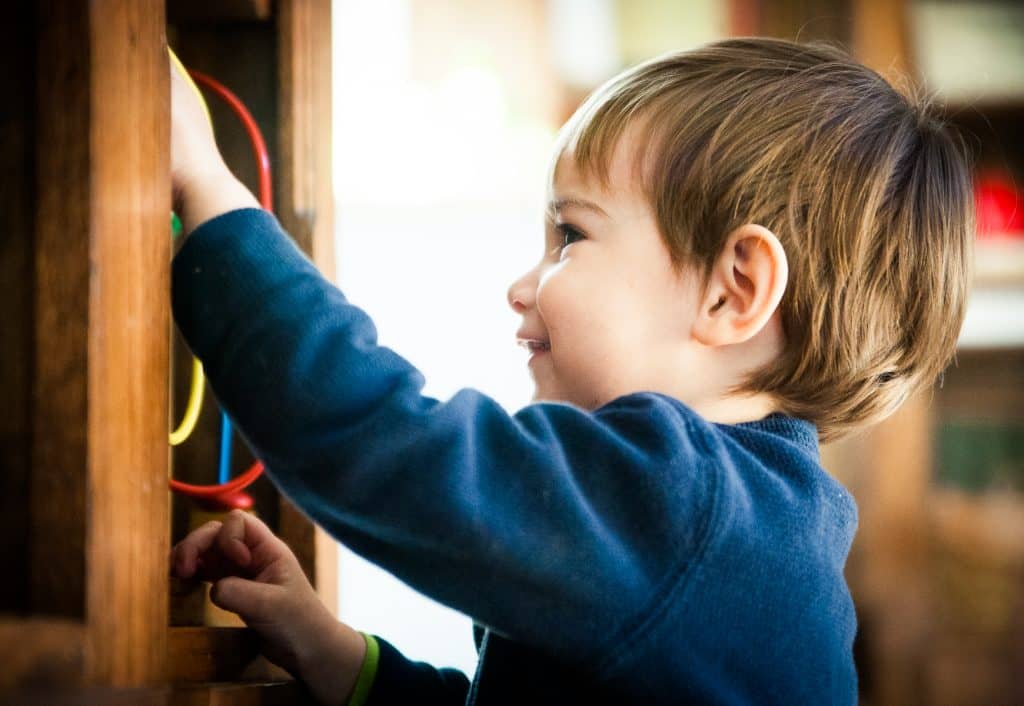 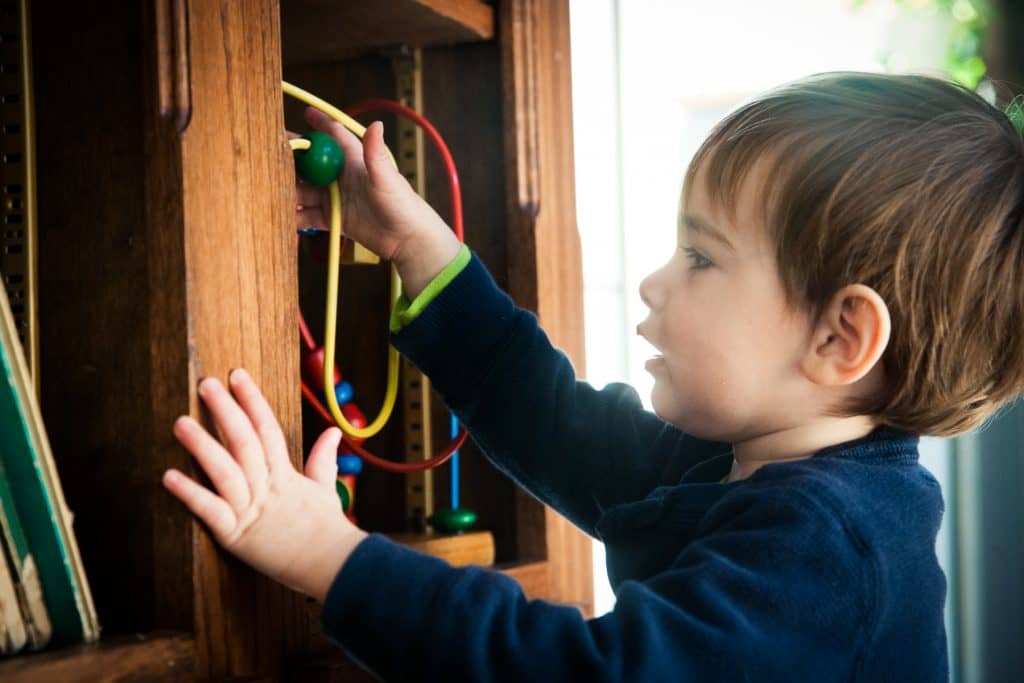 He really loves to read, and is very content to bring a book to you and sit in your lap while you read it three or four times over. Of course, his my has to come along for the trip, and there isn’t anything quite as sweetly wonderful as the way he nestles in with his thumb in his mouth and his my bunched under his nose while he listens to his favorite stories over and over again.

He’s taken to running in spurts everywhere, simply because he can, sprinting five or six steps this way, then stopping and pivoting and sprinting five or six steps that way, not really headed anywhere in particular. Just running. There is a silly little song I sing to him when he does this, and he’s started to do it himself on occasion. I do hear him singing other things to himself every now and then. He loves music and dancing, and does a little dance of glee when I bring out the accordion.

After months and months of never saying Mama, then finally saying it but actually talking about his my, he’s gone all-in with the title for me, saying it over and over to get my attention.

“Doooooown.” (Or whatever else he may be wanting at the moment.)

He says most things all long and drawled-out like that.

He’s enamored with his meow-meow, is becoming more well-versed in animal sounds and just talking in general, really. He’s finally begun repeating things after us (after refusing to do it for, essentially, forever) now that he knows it is a method of getting what he wants. We finally got him to say please “with his mouth”, not just signing, and now we’re working on polite ways to ask for things, like excusing himself from the table or requesting to play with a certain toy that’s up on the shelf. The only thing he won’t really say is “thank you”, which he says instead as a sing-song hmm-hmm.

Oh, does he ever adore his brothers, although I think he knows exactly what it takes to get Clive riled up, and generally delights in doing it. He and Ephraim share a special bond; Anselm loves to get into whatever he’s into, and not with the express purpose of annoying him. Most of the day finds Anselm milling around the house, though–he is a determined and inquisitive little man who enjoys rushing to and fro about the house, seemingly with no direction in mind. He is a big fan of his independent playtime, thankfully.

He really is a jolly guy, loving to rush into your arms with a snuffly lopsided grin. I feel I should specify that, lest my earlier description of his funny personality make it sound like he’s always working an angle. But I have always said he knows exactly  how charming he is, and is determined to work it for his advantage. Thank goodness he isn’t going to be the baby of the family! That’s all I can say.