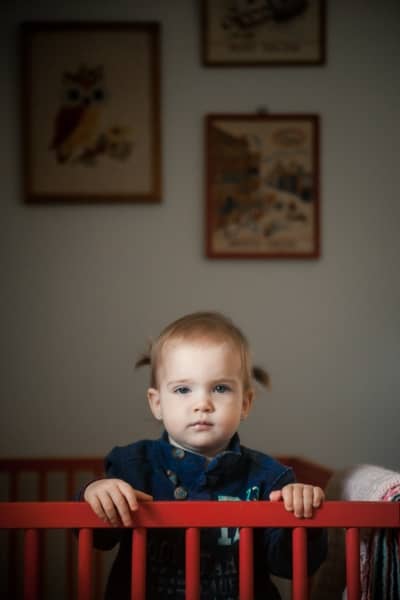 She’s been our slowest teether, waiting until fourteen months or so to start sprouting any teeth at all. Then she spent a solid few months with only two bottom teeth. Finally a couple of top ones came in. Then, one day a week or so ago, she was crying in her dramatic open-mouthed fashion when I spied a bit of white in the very back of her mouth. The child has molars. She has some four and a half teeth in the front of her mouth, and then molars. I don’t understand it, but there it is.

Because of the molars (I assume) we had some trouble with disrupted sleep this month. With each child, teething has just not been a big deal until the molars come in. We’ve never had crabbiness, sleep disruptions, or anything with any teeth but molars–four kids in and this has always been the case. But those molars! They have even caused the kids to stop eating anything they had to chew for a short time. Elvie did become somewhat pickier at the dinner table, but it was the sleep that really suffered when those teeth came in. Thankfully now that I’m aware, I can keep an eye out for the top ones to come in and preemptively strike with some ibuprofen when they do. We’re going to have enough trouble with disrupted sleep once Eldore comes!

Speaking of Eldore, she melted my heart today by sweetly saying his name–she is always saying things very sweetly, unless she wants something right that minute. She’s completely aware of her skill at sweetness by naming things she’s done as “sweet”–like giving a kiss to her doll or to one of the deer heads we’ve got mounted in the living room–“That’s sweet,” she’ll declare, and she declares it quite sweetly indeed, and then she walks down the hallway and screeches at me for some unknown reason. “Maaaaaah-MEEEEEE!” There is no ignoring that call despite its glaring lack of any sweetness whatsoever. 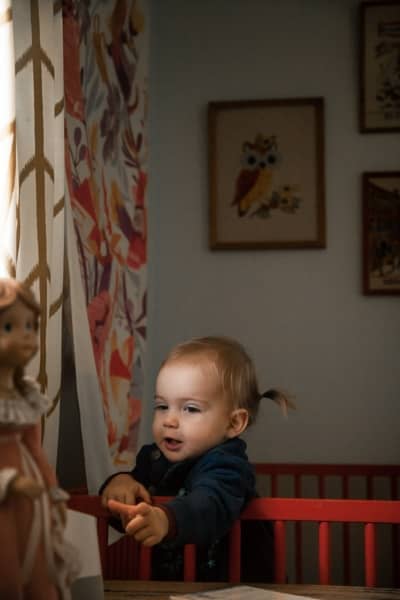 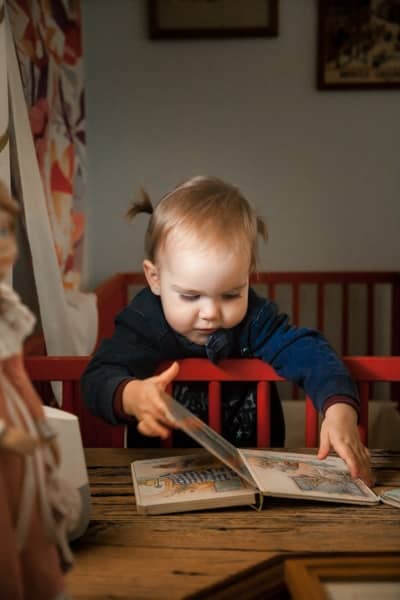 She is excessively concerned with the comfort of her brothers, and spend a good portion of her waking hours delivering their blankets and water bottles to them, finding them in forgotten corners of the house and toddling them to their owners with a soothing “Here, MoMo, here.” or “Here, Clivey, here you go.” (Always said sweetly, of course.) She will not call Ephraim by his name, and calls both he and Clive “Clivey”. Despite this nominal confusion, she still knows whose water cup is whose, and whose blanket is whose, and never makes a mistake, unless of course she plans on drinking from it herself (which she frequently does.)

She loves to help me empty the silverware from the dishwasher, handing each item to me individually (“Here, Mommy, here you go.”) for me to put into the drawer. Sometimes she will also help me put the dirty silverware into the dishwasher, though more frequently she will swipe a spoon with a bit of jelly on it and take off. On a similar note, we’ve finally broken her habit of stealing food from the trash can. I promise we do feed the child, and real food, too.

Her favorite foods are “eggies” (scrambled or fried) and “pea-butter” (sometimes she will eat a sandwich and a half for lunch.)  She’s also a big fan of “meal-meal” (oatmeal) and though she makes a big deal over pizza (“PEEEE-DAAAAH!”) she doesn’t actually care to eat it much. She treats it the same way she does apples: take bites, suck all the flavor out, then spit out the remains. Fortunately she does this to pizza in her high chair; with apples, she’s more prone to sneaking one from the counter and then leaving little half-chewed and flavorless apple remains all over the house–and if you’re lucky, you’ll also find the apple itself, halfway under a chair and covered with little teeth marks. If you’re unlucky, you still find the apple: eventually, when it is Too Late.

Her hair is finally long enough for pigtails; she has learned rather quickly to sit still and let me do her hair, though sometimes she will mutter “Dat hurts…dat hurts.” She is fond of her “pretty bows” and has been known to leave a wrestling pile in order for me to re-attach a hair bow that has come loose before swinging around and re-joining the fray. I cannot for the life of me get her to leave them on in the car, though. As soon as she’s strapped in, she reaches up, yanks the bow out, and tosses it to the floor, and I then have to strain and stretch with my pregnant belly to retrieve it.

Her relationship to her siblings has been an interesting dynamic to observe. Ephraim is her keeper, her protecter, and the most likely to harass her. I can always count on him to know where she is, what she’s doing, and to holler at her before I can even reach the situation to make an assessment. He is the one that makes her run, complaining, to wherever I am, grabbing me about the knees and hiding from his teasing. (When she does this, she makes what we call her Cakies Alarm, which is achieved by making her mouth into an o shape, sticking out her tongue, and then moving it back and forth quickly while yelling…the effect is a persistent ditherditherditherditherditherdither or perhaps noodlenoodlenoodlenoodlenoodlenoodle sound…it’s quite difficult to transcribe. You sort of have to hear it for yourself. She uses this alarm to alert to the house that she is being chased, harassed, is having a toy stolen from her, or is just generally displeased, etc.)

Clive is as interested in her wellbeing as Ephraim but is much more gentle, talking to her more than remonstrating her, and very rarely irritating her to the point that she resorts to the Cakies Alarm. It is no coincidence, likely, that she calls both he and Ephraim by the same name. Maybe she’s trying to give Ephraim a hint.

Anselm is her partner in crime and her worst enemy in turns, and the turns change faster than can almost be caught with the naked eye. One moment they are harassing one another to the point of tears, and the next moment they’re laughing and playing. She’s almost as big as he is, and quite a bit tougher, not caring much if her person is injured during their tussles. I keep warning him that he’d better stay on her good side, as she may be able to whoop him soon. He is a little more delicate when is comes to personal injury.

She’s very interested in babies–dolls and live ones–and I am eager to see how she reacts to having Eldore in the house. The boys were, in general, Not Interested in the new babies we brought home, unless of course they could poke their eyes. (They couldn’t.) Elvie, on the other hand, has been drawn to babies for months, and while she pokes the eyes of her dolls, with live ones she tends more to hugs and patting than to poking and prodding.