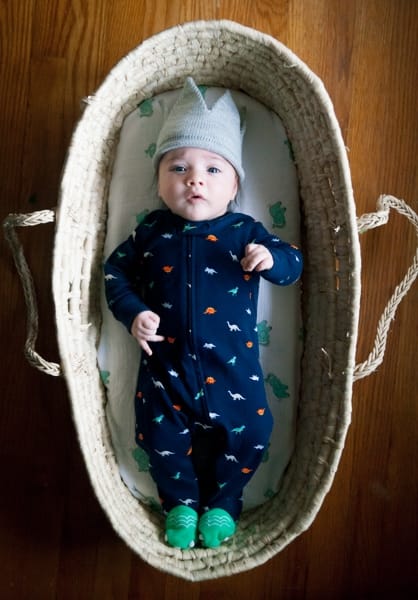 As I write this update, the Monarch Himself is in the other room in his Moses Basket on its stand; it is close to nap-time, and he is complaining a bit to the light fixture on the ceiling, which is, I assume, listening most attentively.

It has occurred to me that Eldore sightings are somewhat rare in the house. If you don’t come at the right time of day, you won’t see him at all. His wake time is short, still around an hour to an hour and fifteen minutes. He goes to bed at 5 p.m. and doesn’t wake until sometime between 11:00 and midnight. The other kids respond to his presence as if he were some exotic bird, seldom seen, and herald his arrival in the common areas of the house as if he really were the royalty his name suggests.

The elusive Eldore Rex can generally be found in three places, however: in his bassinet, napping; on Mama’s bed, having his diaper changed; or in his Moses Basket, singing and complaining to the light fixture in turns. Being the fifth baby, and being in possession of a gaggle of Eldore Enthusiasts (also known as his siblings) means that our little King is (I believe) the first Krans baby to spend virtually no time on the floor, as Mama is certain he would be squashed by his adoring fans. For his part, he is an extremely social baby. I don’t recall the others being so. Very often he will wake from his nap and cry in his crib, and I will go to get him, and all I have to do to stop his tears is to let him see me there; then he is fine. Even when he is hungry, he will stop crying as soon as he sees he has company. So when the children crowd and fawn over him, he welcomes their smiling faces with coos and crows of his own.

He’s a talker, and a little bit of a laugher, if you make the right noises, of course. Most of his chuckles are reserved for the ceiling fan, of course, and its close relative, the overhead light fixture. He also will search diligently for Ephraim when he hears his voice. He has one dimple, on his right cheek, which he shares generously with anyone who will stop to chat for a while. He’s found his fists and favors the right hand in particular, and the index finger of said right hand even more particularly, and the knuckle of the index finger of his right hand most particularly of all. He likes it so much that I’ve broken my own conventions and went with leaving one arm out of the swaddle instead of just breaking the swaddle cold-turkey like I usually do, hoping that his preference would make the process easier. I am pleased to report that it has.

Things He Is Good At: hollering; nursing; burping; charming; kicking; being Handsome.
Things He Is Not Good At: waiting; tummy time. (The latter is My Fault.) (And probably the former, too.)

His eyes are still blue. Ephraim and I are excited about this; it’s one more for “our team”. And his wild, wild hair is still not falling out, but he’s beginning to rub it off on the back of his head.  He’s a big guy.  I’m not sure exactly where he is in height/weight and all that, but he’s outgrown all the 3-6 months stuff. It’s for babies. And he’s the King, you know.

twenty-three months (elvie kay)
photogenic (or, the tragedy of the photoshoot)