It’s a quiet Sunday afternoon, and everyone is resting but Elvie Kate and Mama. I am seated at the table with the open computer, a leftover cupcake and cup of coffee resting beside the machine. Lying on the floor nearby is Madame Herself; she is positioned under the wooden gym toy that every baby in our family has used and loved. She flails wildly as she sings to the toys dangling overhead, and every now and then she quiets and makes a slow, methodical swipe at them with her left hand.

We’ve come to the stage of monthly updates where there is really something to update about. Those Deliberate Swipes are something that have manifested just in the last week or two. Before that, if you put her on the floor, she would crab and complain until someone came to talk to her (so she could talk back.) Now she is content to study and converse with the toy itself for a quite a while. When she fusses I know it’s time to put her down for a nap. 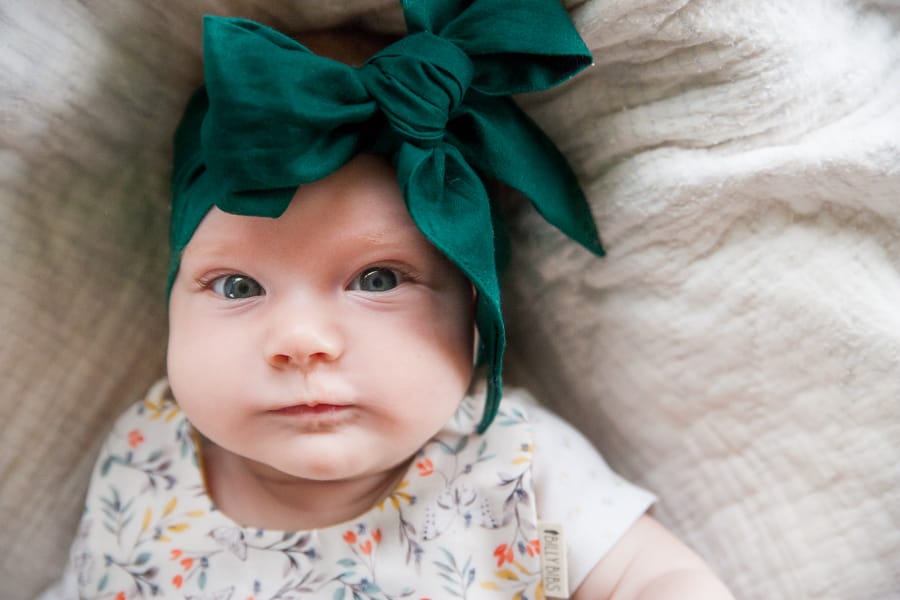 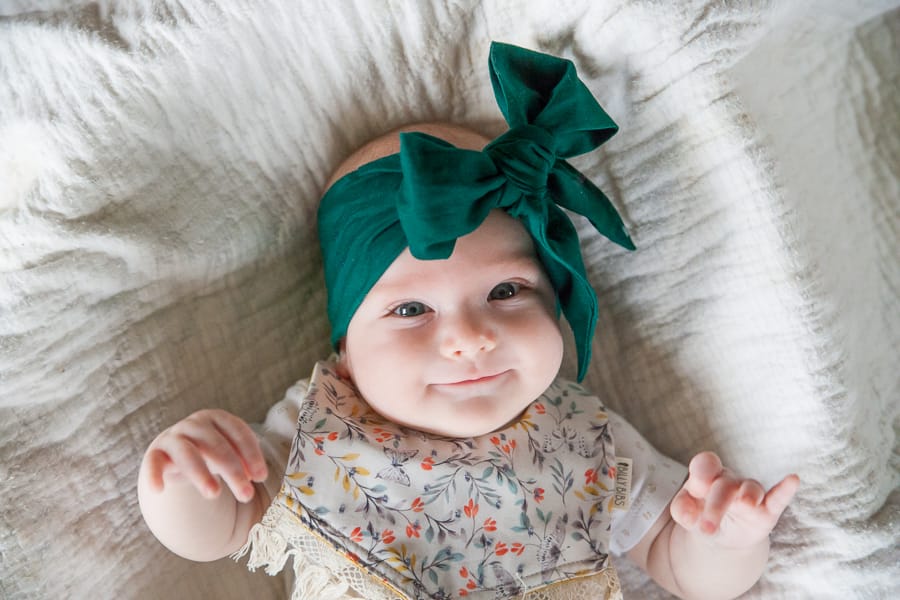 That is the first big change of the month–the second is that the cup of coffee I’ve got is not decaf! For the past couple of weeks, I’ve been testing different levels of caffeine to see how she’d react. So far nothing seems to be bothering her. Oh Happy Day! 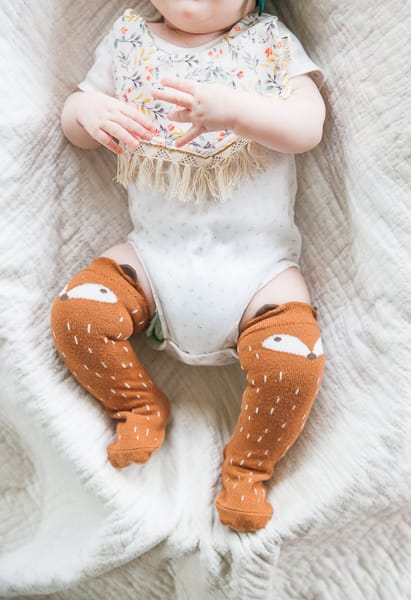 In fact, sleep has progressed so much in the past couple of weeks that the tumultuous naps of the first two months already feel like a distant memory. There are still quite a number of hiccups–things are far from perfect–but we are down to only one nursing at night, and are putting ourself to sleep without a hitch for most naps. These first few months are always so difficult when it comes to starting good sleep habits, and it’s such a relief when the work begins to pay off.

Three-Month-Old Elvie Kate is a devoted fan of squeaky sounds and whistling. Any person attempting either one in her presence is sure to be rewarded with a squinty-eyed, half-dimpled smile. It a peculiar thing–the left eye squints, and the right cheek holds the very faint dimple. It’s as if the one balances out the other. I wonder sometimes if you could get her to keep her eye open then the other dimple might appear.

She is also a talker, expanding her repertoire from the standard hoo-hoo-hoo to include ggggoo and kkkhhhhh and other ladylike sounds like that, always voiced with the utmost earnestness, of course.

But Elvie Kate enthusiasts beware: upsetting Madame Herself comes as easily as winning the Squinty-Half-Dimpled-Smile. The simplest way to achieve Very Sad Upside Down Smile is to attempt to hold her like a baby is commonly held, by cradling her in your arms. This is Elvie Kate’s very least favorite position to be in unless there is nursing involved. She insists on being held upright where she can see what is happening, because how can she ever learn to be a busybody if she can’t get in on what’s going on around her? (I am just assuming, of course.)

Another, less reliable form of inducing sadness in Elvie Kate is to talk to her with glasses on. This of course depends on which way the wind is blowing and what day of the week it is.

She’s gotten quite the fuzzy head this month. I don’t remember seeing what little hair she was born with falling out, but it seems to have all been replaced with a keen layer of fuzz that is somewhat peach-colored when the light hits it just so. Her eyes have, mercifully, stayed a grey-blue color, much like Mama’s and Ephraim’s. (I say mercifully, because we thought last month that her eyes were beginning to change, which just broke Mama’s heart, in the least heart-breaking way, of course, since eye color is not really that big of a deal.)

As a tummy sleeper, she’s also become extremely proficient at drawing up her knees and pushing herself about her bassinet when she ought to be sleeping. At her two-month appointment, her pediatrician said she had the gross motor skills of a four-month-old. I wonder what he would say now.

She’s still an enigma when it comes to her looks. Every day she seems to embody some trademark habit or expression of one brother or another, and just when you think you’ve figured out who she looks like, she changes on you. She truly does belong to all of us, little Kunchkin, Tiny Butters, Baby AHH-EEEE.