We announced our pregnancy at Clive’s first birthday parties (one for Florida family and one for the Kentucky branch) by presenting him with a little t-shirt that said “Big Brother.” Each announcement was met initially with stunned silence, something that still makes me chuckle. Ephraim was two-and-a-half, Clive was barely one, and here we were embarking on this journey of welcoming another baby into the family so quickly. I’m sure everyone thought we were crazy. I would be asking myself that quite a bit over the next few months, actually.

I was on cloud nine until my morning sickness started at about seven weeks; after that, all of my carefully striven-for order came crashing down around me. I was absolutely miserable; whether it was because I had been pregnant three times in three years, or because I had two very young children to care for while simultaneously growing a third, or because I was three years older than my first term pregnancy, I really don’t know. Probably a combination of all three. All I knew was that I went very quickly from being excited about being pregnant again to wishing I wasn’t pregnant at all, and that was a horrible feeling.

I mentioned in Ephraim’s story that miscarrying our first changed my perspective on the trials that pregnancy brings. When you’ve lost a baby, and especially then when it seems like it’s unlikely you’ll ever have one, you would tear your right arm off to be able to just experience those awful things that pregnant moms complain about. The fatigue, the sickness, the back pain, the labor pains, the insomnia. Anything and everything is worth it, just to be able to carry and give birth to a healthy baby. I had maintained that belief so stringently that I would block, unfollow, or unfriend on social media women who complained about those unavoidable pains of pregnancy.

the spiral of guilt

Imagine how rotten I felt to have gone from praising Jesus for each time I threw up to wishing I could somehow magically not be pregnant anymore. I was so miserable and unhappy that I was convinced I would cause myself to miscarry. When I wasn’t feeling miserable, I was beating myself up for feeling miserable and ungrateful; I was painfully aware of the irony of my about-face. Anselm’s pregnancy felt like one long sob, a huge red flag that I’d somehow overstepped my bounds and taken on far too much. There were good spots, for sure, but the overwhelming feeling was that I was just that: overwhelmed. I told Jeremy that it would probably be wise to take a few years’ break after the baby was born. I didn’t want the finality of saying “we’re done”, but I recognized my loss of perspective and was grieved and frightened by it. Because of my own habit of judging women who weren’t, in my opinion, perfectly grateful for the gift of their pregnancies, I was terrified of sharing my own misery, and only told a few close friends about how awful I felt.

Despair, fear, and the feeling that I just couldn’t do it. Complete and utter exhaustion. Fortunately I had the full support of my husband, my family and friends, and I was grateful that my boys were far too young to remember how temperamental and unbalanced I was. I wondered if this was somehow God’s way of trying to tell us something. In hindsight, he most likely was–but not the message of “take a break” that I thought I was hearing.

Until I was pregnant with Anselm, I couldn’t comprehend how someone could be both happy for something but wearied by that something at the same time. I’ve always been a very black-and-white thinker–not much room for grey areas–and that’s essentially where I found myself. Once my morning sickness subsided I felt better about the pregnancy overall, but I never really recovered from the overwhelm and fatigue and general feeling that I was way past my limits. 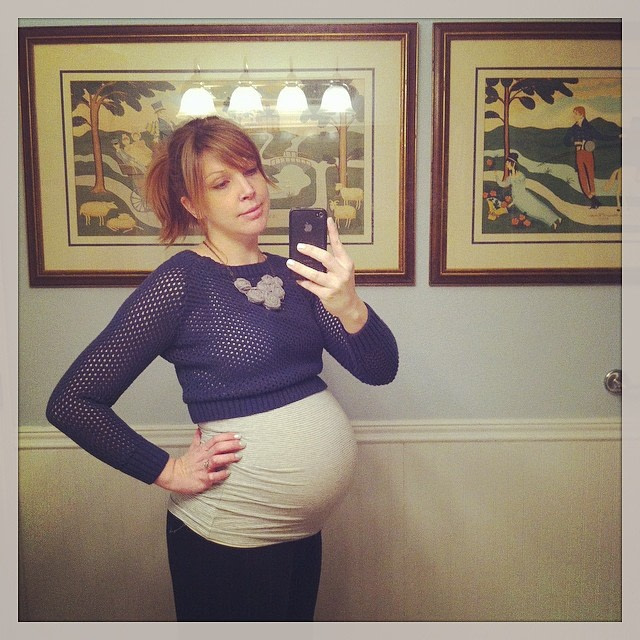 38 weeks to the day–just two days before Anselm was born.

When we found out that we were pregnant again, Jeremy said immediately that, should we have another boy, he wanted to use the name Anselm. Now, I did not like that name. At all. Jeremy’s mind and heart were set, however, and a deal was struck that I could pick whatever middle name I wanted. I chose Ioan, the Welsh variant of John; John is my dad’s first name, and Ioan was one of my mom’s favorite names, and I thought it would be a good alternative in case none of us could ever get used to “Anselm”. That was the extent of my thought process for my choice of middle name.

Anselm was born at 38w 2d, and was my longest labor yet, since I walked the halls for hours and hours to be able to progress enough for the hospital to keep me. Because Ephraim was induced and Clive came so fast, I was incredibly paranoid and anxious that not only would I miss the signs of labor, but that my water would break at home or in the car and I’d be unable to get to the hospital in time. And because of my hemorrhage after Ephraim’s birth, there was no way I was going to have a baby anywhere but in a hospital.

I was so paranoid that I went in to the hospital at least two times with false alarms, and called my OB in the middle of the night enough that I started to get embarrassed. It was my third baby, after all–wasn’t I supposed to know what I was doing?

I was 38w 1d when I went in with contractions that were certainly there, but stupidly irregular unless I was up and moving. Anytime I stopped, they stopped. I was 3 centimeters dilated when I got there; since the hospital was not busy that night and I had a history of moving very fast once labor kicked in, they let me stay and walk. My OB visited around 10 p.m. to see how much I had progressed–after about six hours of walking, I had dilated an additional 1.5 cm. She told me to stay there and that she would check me again in the morning around 9 a.m. If I was over 5 cm, she’d break my water to speed things up. If not, I would need to go home. I was determined to not leave without a baby, and walked the halls for most of the night. Back and forth, back and forth.

I gave up around 3 a.m., maybe, finally going back to our room and trying to sleep. I slept fitfully for maybe a couple of hours; by 6 a.m. my contractions were strong but probably twenty minutes apart. So I just sat in bed, watched TV, and waited to see what my 9 a.m. check would bring. I felt fairly sure I would be going home. 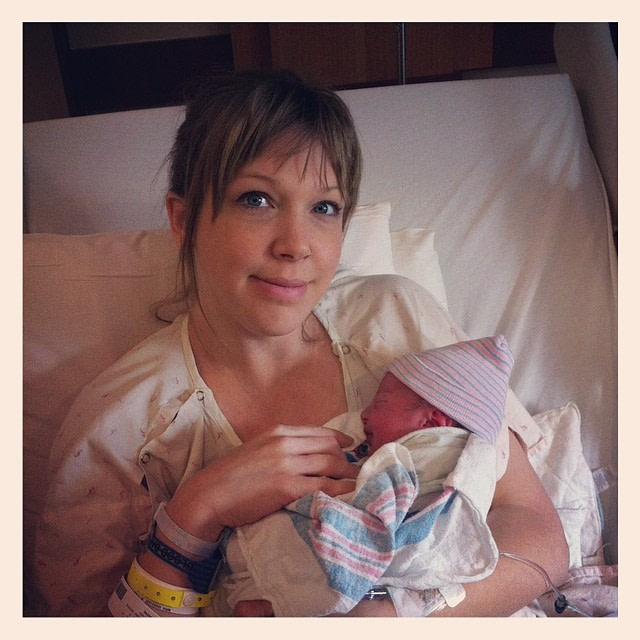 worn out and weary

My doctor came right around 9 o’clock as promised, and another cervical check showed I was indeed dilated enough for them to keep me, and she broke my water with a cheerful, “Let’s have a baby!” which made Jeremy and I laugh since there was only one person who would be doing much in this process, and it was me. Just as in my two previous births, the breaking of my water brought on a completely different type of labor. Suddenly the contractions were perfectly timed, incredibly intense, and very close together. I wasn’t hooked up to any monitors or IV feeds, so the nurse told me I could feel free to walk around or get in the shower.

I had never been able to labor in the shower, though I had wanted to, so I decided to try that. It turned out to be a horrible mistake as my contractions were too close together for me to get out of the shower again. Every time I tried, another would start and I’d just have to stay put until it was done. It was both incredibly annoying and incredibly funny. I finally managed to get out, dry off and dress (just gritting my teeth and bearing the pain of the contraction while I did so.) Let the record show that I am officially a sit-quietly-on-the-bed-through-labor sort of girl.

I managed the contractions by talking to Anselm through them. Despite the tumultuous emotional nature of the past few months of pregnancy, I was still beyond happy and excited to meet him, even if I was anxious–very anxious–to have him in my arms instead of my belly.

It wasn’t very long after my water was broken that I realized the mistake I had made by staying up practically all night. I was absolutely worn out, completely and totally exhausted, and I could feel myself beginning to panic at the onset of each contraction. I have never, not once, cried out or screamed or yelled through my labors–though Jeremy says I grunt while pushing–even without the help of an epidural. But I could tell that I was losing my cool. At about 10:25 or 10:30, I decided I had had two natural births and didn’t need a third, and asked the nurse for an epidural.

I had barely signed the release forms when my body began to push on its own.

Essentially I was in transition, that phase of labor when you feel like you can’t do it anymore, because you’re actually almost done. It’s that darkest hour before dawn. I never did get that epidural, and my doctor didn’t even make it back to us in time to deliver Anselm, who was out like a flash a mere fifteen minutes or so after I decided I couldn’t take any more and asked for the pain relief.

He came out and cried and sounded just like a cat. And I laid back on the bed and felt like a giant hand was pressing me down, holding me down, and I was impressed very clearly with this: I have been gracious to you.

Graciousness. Mercy, compassion, kindness. It went beyond the misery of the pregnancy–it stretched back to that first loss, that bitterness that followed, the fear, the feeling of being let down, disappointed by God, the years of uncertainty, the fear of Ephraim’s pregnancy, the fleetness of Clive’s, the misery of Anselm’s.

It was an impression that left me in awe, and that, for lack of a better word, haunted me in those days following Anselm’s birth and in the two years since then. I will not expound on it more now, as it’s better to just direct you to the post I wrote about it just a few days after Anselm was born.

But that middle name I picked, not quite on a whim, but almost? It took me two days to remember and realize that it means God is Gracious.

Click here to read a much more detailed account of Anselm’s birth story, written just a couple of weeks after the fact.