We went for a walk yesterday through the orchard. It’s hard to call it that–it still looks like a motley collection of twigs stuck in the ground. It doesn’t quite have the feel of a real, mature, fruit-bearing orchard; though it will, of course, become that with care and time. 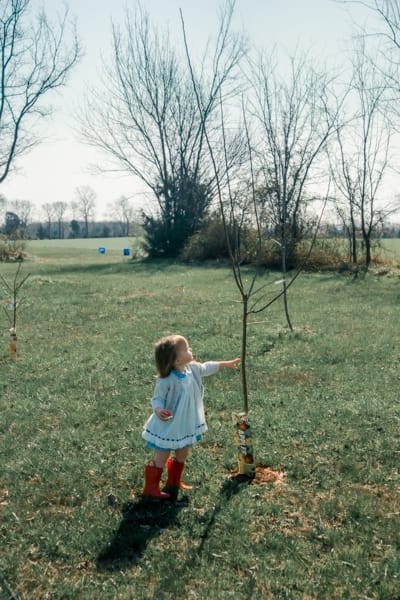 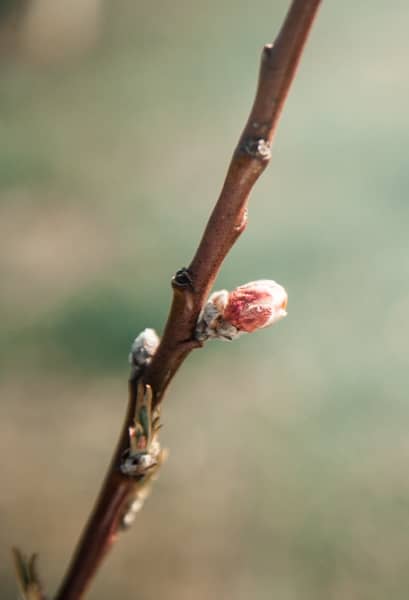 The trees are just stirring with the brief bout of warm weather we’ve had.  Some are tentatively putting out little buds; others are still sleeping, waiting for Spring to truly come. The plum trees, though, have enthusiastically burst forth with every blossom their tiny, immature branches can muster. This would be exciting except for the fact that they always seem to do it before Winter is truly over. This year we tried to cover them to protect them from the returning frost, but whether that will have succeeded remains to be seen. 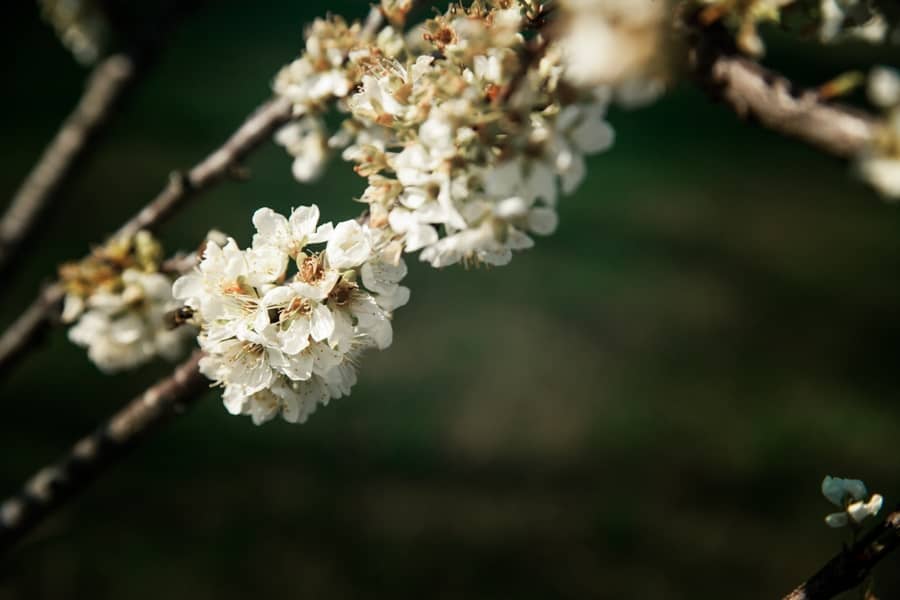 Directly opposite the most zealously blossoming plum tree is a tall tree that is many years old. It grows in the tangled, neglected tree line, which is full of brambles and vines and things that look like berries but likely ought not be eaten. This tree also passionately embraces the first signs of warm weather, putting out a show-stopping number of blossoms over every inch of its form, and it does it while the other trees are still barren and dormant, so that the flowers in white clusters catch my eye from anywhere I happen to be. They are unmistakable and lovely amidst the grey and brown of the tree line, the grey and brown of the sleeping orchard, and the deep green of the wheat fields beyond our land. It doesn’t seem to have been affected much by the frost or late snow that we had.

There’s just one problem with this tree: for all its flowering display, it does not bear fruit. It never has. It never will.

It is a kind of tree favored for its fast growth and beautiful flowers. It is used as an ornament in landscaping, called a “pear” tree even though it doesn’t actually grow pears. Their branch structure is weak, and their beauty is short-lived. They were supposedly unable to reproduce themselves, but it turns out they will cross-pollinate with real fruit trees and then spread.

I had to wonder–because it’s a bad habit of mine, wondering–I wondered if the plum tree was aware of the pear tree’s display. If it thought it had to compete somehow. If there was an anxiety in that frantic bursting into bloom. Did it know how much the taller tree overshadowed it; that when I looked out from my kitchen window, I couldn’t see the plum tree for the pear tree beyond? Did it resent its being covered with the sheet to protect it from the frost? If I told it to wait out the false signs of Spring, would it listen? Would it submit?

One will serve a purpose beyond beauty; one is fit only to be cut down and thrown in the fire.

Can I tell the difference?
Can you?