It was Friday evening, the end of our visit to Florida; Jeremy and I were trying to decide what departure date and time would be best for avoiding the nightmare of post-spring break traffic. Would we wake everyone early, before the sun? Would we take our time leaving, knowing the highways would be jammed no matter when we left? Which day would be worse, Saturday or Sunday?

It’s the worst part of vacations, having to pack up and go home and drive for a day on a mindless, boring stretch of highway. I dread it, in a way, and I always try to get through it as quickly as possible. In fact, not one week before, someone had asked for tips on traveling with small children and I had said (among other things) to try and stop as little as possible. More stops make for longer trips and longer trips–well, they make my blood pressure go up.

So secretly I hoped we would opt for Sunday, since it would delay the grief of a day spent in the car as well as give me an extra day to dawdle about packing. In the end, however, we decided we would just take our chances and leave Saturday morning, though not in a rush.

It’s a good thing we didn’t rush, since we had to double back twice for things that were forgotten. (It seems I dawdled in my packing anyway.) And by the time we were barely an hour or two on the road, traffic came to a dead halt. It was time to feed Elvie Kate and find food for ourselves, too, so we pulled off the highway as soon as we could to nurse the baby and deliberate over our options.

“I say we forget the highway and take back roads,” Jeremy was saying, as he fiddled with the GPS that had decided we weren’t at a prime location for it to work properly.

“For how long?” I had serious misgivings about just taking off down a state road with no idea if we were going in the right direction. Plus we had four kids in the car, one of which allowed us about two and a half hours of driving between stops, a fact that was already turning a long road trip into a very long road trip. My hopes for a get-there-as-quickly-as-possible drive were already frustrated by the combination of newborn, traffic, and highway construction–did I want to add to that by sticking to long, windy roads with 45-mph speed limits? 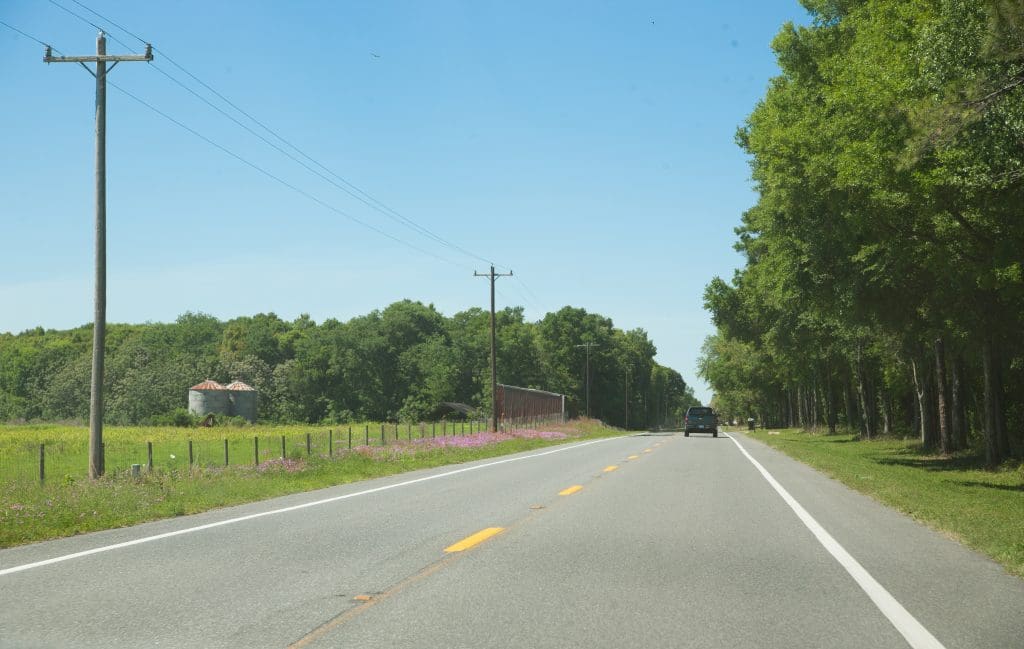 “As long as we can,” was the general reply, and he had already started driving down the road and away from the freeway; the GPS cooperated for precisely one minute before losing its connection again, and he turned it off.

As long as we can? My mind whirled with all the reasons why we couldn’t, though none of them really made sense.

It would make the trip longer.

Why couldn’t the trip be long? Our kids are great car-riders.

We’ll get home really late, past their bedtime.

Then they’ll sleep in the car. Why is that a problem?

What if the drive is too long? We might have to stop and get a hotel.

Then they’ll love the adventure.

I don’t want to be in the car all day.

Then we’ll get out of the car a lot.

…OK, I’m out of objections.

By the time I had pulled up a map and picked out a route to compensate for our failed GPS app, I was starting to get excited. I may be Type A at times, but I usually know when I’m being unreasonable, and once the pointless protestations had been dealt with and my mindset shifted I could see the possibilities for the day unfolding.

“It’ll be an adventure,” Jeremy proclaimed, after I informed him of my paradigm shift.

“It’s slow living!” I replied, and we set about looking for someplace interesting to stop and eat. 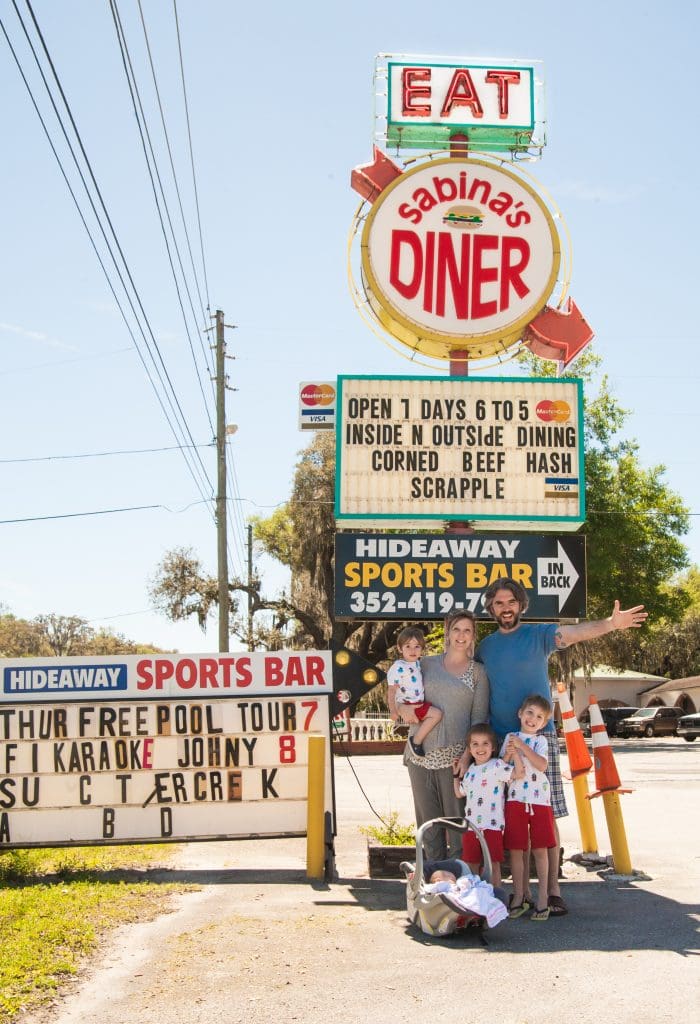 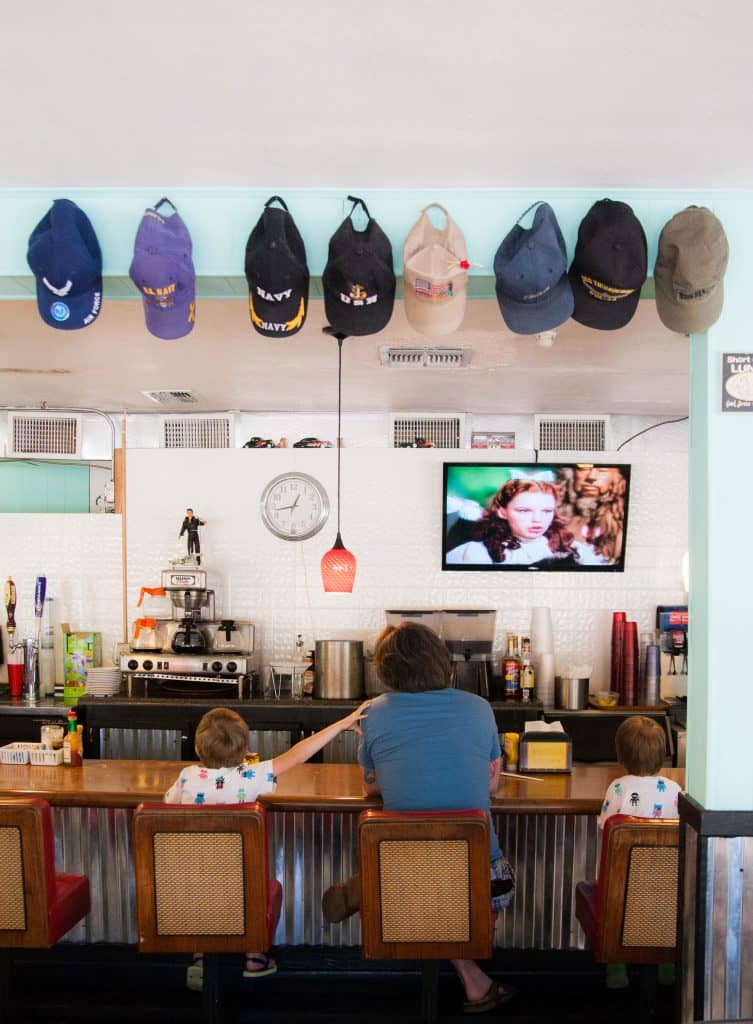 We found a place fairly quickly–I was drawn by the advertisement for milkshakes that was painted on the windows. The boys ate “cake-cakes” (pancakes) and I had a waffle and Jeremy had country fried steak and Elvie Kate slept through everything. We watched part of The Wizard of Oz and read some of the children’s books they had available by the tables–which, by the way, is such an excellent idea for a restaurant.

We went on and drove through a hundred little towns, past their churches and gas stations and diners and proud watertowers. We drove past groves and farms of unfamiliar crops (blueberries, we guessed) until the palm trees and Spanish moss were replaced by Georgia piney woods. The kids took turns napping and someone was always asleep when we stopped to feed Elvie Kate, so we didn’t get out at too many interesting places after our wonderful lunch break. We saw plenty, though, and everyone was content.

As night drew near, we decided we could keep driving, since the ever-changing interest of the scenery meant that Jeremy wasn’t as fatigued as he usually is after a day of highway driving. Something about that slow ramble through the back roads was simply energizing, even though it took twice as long. In the end, we made it home after fifteen hours on the road; the trip would be around eight hours normally. We all stumbled into the house at around midnight, collapsed into bed, and slept late the next morning. Then we all woke up and had donuts, which is precisely the very best way to end a vacation.

I’ve done a lot of thinking lately about the idea of slow living, and I keep thinking back on this particular trip and how many really silly objections I had concerning it.I’ve not found the balance yet between keeping things on an orderly routine and knowing when to let the routine go–I’m not sure I ever will. I’ve found there are dangers on both extremes. At the end of the day all of those concerns were unfounded–but I know that’s because we had a strong base from which to deviate. The kids rode well in the car because we’ve spent years teaching them to ride well in the car. They didn’t mind the poor sleep that day because they were already well rested.

This very slow trip was, for me, a hefty pull away from the extreme of the hyper-schedule, the purely utilitarian approach to the everyday, where we do things quickly and efficiently simply for the sake of being quick and efficient. There’s no real thought behind it, only the half-pondered reasons why doing otherwise would be a waste of time and resources which, upon closer inspection, prove themselves to be not only arbitrary but even dangerous in their own way.

But that, Dear Reader, is another post for another time.