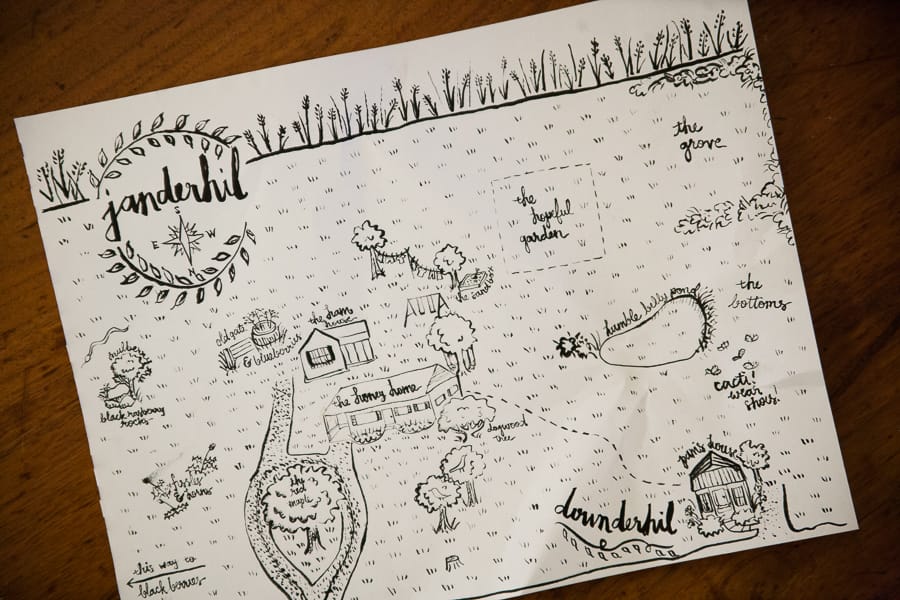 I made this little map of Janderhil a few weeks ago. If you’ll notice the crinkle in the lower right corner, you’ll see where Clive left his mark while perusing the map. It’s not too big of a deal, since things have changed on the property and I have to make a new map, anyway. I have to add Fairweather Pond (or the place where Fairweather Pond appears after rainstorms), I have to move the blueberry bushes (they’re not in that trough anymore), and I have to add the trees we’ve planted. 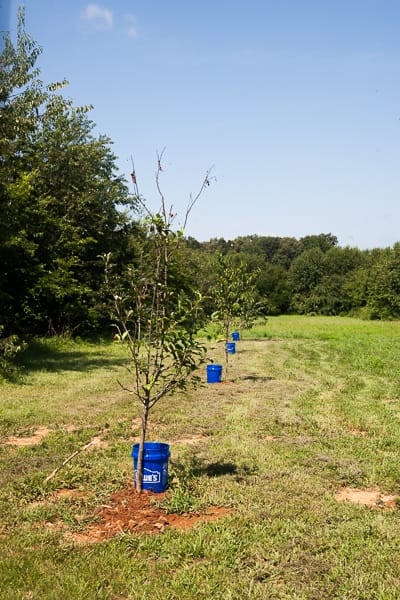 We got these trees last week, along with a willow tree, and Jeremy planted them in the rain while I took pictures and watched. They are four different fruit trees: an apple, a peach, a pear, and a plum tree, and they’re planted in alphabetical order (from East to West) so that I will not forget which is what should one of them die or the tags fall off or something.

The blue buckets are not a sponsored ad for Lowes. They’re how the Nursery worker suggested we keep the trees well watered. Watering with the hose, he said, usually means the water just runs along the top of the ground and doesn’t penetrate down to the roots of the tree. His advice was to take five-gallon buckets and drill a 1/8″ hole in them, fill them with water two to three times a week, and let the slow steady stream of water irrigate the trees. I have never heard of this before, so I’m very glad he told us about it before we stuck with hose-watering and killed the trees. 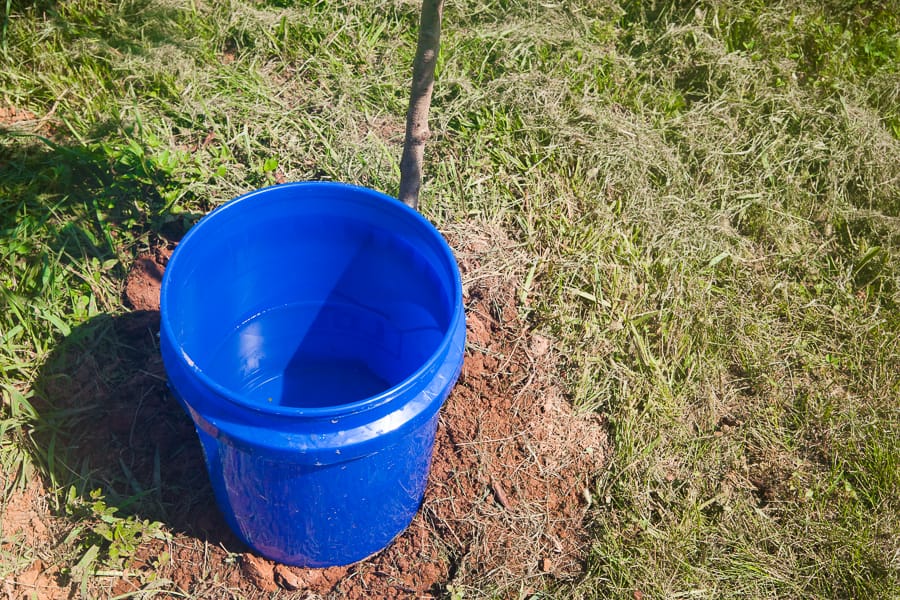 The trees are planted along what will one day be the garden (it’s drawn as The Hopeful Garden on the map above.) We’re planning on planting (ha!) more in The Grove, though.

On the southwest corner of the farm is the little alcove that we call The Grove. I’m not sure why that name stuck. It’s not really a grove, it’s more like a peninsula of field, but it’s wonderfully moody in the late afternoon and would be the perfect place for a cozyish picnic area or something. The rest of the time it gets quite a bit of sun.

Here is The Grove in real life. It looks small because it’s difficult to photograph the U-Shape that the wilderness forms around it. It’s actually fairly large. There are wild animal trails through all those trees and underbrush, and there are also copious amounts of passionfruit vines around there, too. There hasn’t been any use for that area since it ceased being a pasture for horses, and it’s about the furthest from the house that you can get. The plan is, though, to clear the brush out quite a bit and to plant more fruit trees there so that its name will be an accurate one. And then, one day when the trees are more mature, to have a set of tables out there in the shade of the orchard.

I’ve written before that there is a certain amount of idealism that is necessary in motherhood, and The Grove certainly embodies that. My heart flutters at the thought of one day hearing one of the kids say, “Mom, I’m going out to The Grove to read” or “Hey, let’s have school in The Grove” or “How about dinner in The Grove tonight?” I think about the beauty and wonder of being able to wander underneath the trees and just sit and think. As a grown-up, this farm I grew up on has shrunk considerably, but I still remember how enormous and wild the fields felt as a child, when it seemed I could walk to the barn and be miles away from the house. It always felt like a storybook, and even though I now know I can walk around all six acres with quick and steady strides, it hasn’t lost its beauty for me.

We are collecting trees for The Grove that will hopefully be planted soon: fig, persimmon, apple, a couple of fruit cocktail trees (I am very excited about those!) Soon it will be a prettyish wilderness of saplings and blue buckets.

the eager congregant (a poem)
what we read (july)