Clive Louis has always been the most enigmatic of the children. When he was a newborn, I spent an enormous amount of time trying to “figure him out”; while I did eventually nail down his (very rigid set of) preferences, there was still something about him that intrigued and eluded me. He wasn’t exactly peculiar, but he was very mysterious. I knew that he was very particular and once he hyper-focused on a certain path of thought it was nearly impossible to derail him. We called him our “Bulldog”, because once he was set on something, he locked in and wouldn’t let go.

What really mysterious were the things he would lock onto. You never really knew what was coming. It was as if his head enveloped an exceptionally intricate and complex factory of opinions, questions, stories and projections, ever working, working, working–but he never let on. Only every now and then would something break through into the outside world, and I was always left wondering where did that come from? I could always tell what Ephraim was thinking, but Clivey always seemed to surprise me. He was, as continues to be, the quintessential introvert.

For example: one day, when he was around a year and a half old, we discovered he knew his numbers. I mean, counted and recognized his numbers one through nine. This was astonishing because I hadn’t taught him his numbers. I hadn’t even taught Ephraim, who was nearing three years of age, his numbers, either. I mean, we talked about them and we pointed them out when we saw them, but only very casually. Ephraim didn’t recognize numbers, but Clivey did.  And he kept it carefully (though probably unintentionally) hidden until we accidentally caught on. 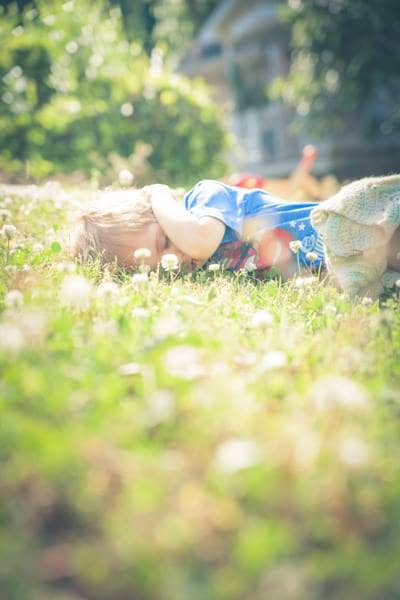 Clive at 2.5. On the day I took the picture I captioned it:
Daydreamer Clive.
He’s not asleep. He’s just taken his blankie out “to da grass”. There he would have lounged much longer had I not disturbed him by taking his picture.
I hope he’s thinking about writing stories.

On the day I took the above picture, I had stood outside and watched him lying on the grass with his eyes closed and realized, suddenly, that I was watching that aforementioned complex factory at work. Clivey had gone into his head. And it was as if I could see, for a split second, what he was working on in there. It was colorful. It was full of wonder. It was rich and exciting and sparkling and everything that a child’s imagination can be. I knew the potential of what was stirring in his thoughts; I felt I was watching a child version of C S Lewis or J R R Tolkien. Whole worlds were swirling in that head. I knew it.

I wrote in our pirate adventure that Clive had really blossomed out here in the country. He finally has the space for it–he and Ephraim spend almost their entire day outdoors. They run and play and pretend for hours and hours. And when they come inside for meals and snacks and rest times, they bring the pretend in with them.

Of course we love The Muppets. When the boys were little, The Muppet Show was one of the few things I would let them watch. (See above video of sixteen-month-old Clivey watching the Swedish Chef.) Now that they’re older, I’ve heard them occasionally play Muppets together–and they frequently make Anselm be Walter,  which is just kind of hilarious. I guess I wasn’t surprised when they found my mom’s old Kermit puppet in a closet in the new house. I wasn’t surprised that they wanted to make it talk. I was surprised that Clive would put him on and bring him to life so completely. Kermit is not always real, but when Clive is kind enough to animate him, he’s exceptionally real indeed. (Or so he’s told me.) He looks around, he has his own thoughts and preferences.  His voice doesn’t sound like the classic Henson voice, but it’s not Clive’s voice, and it’s always the same whenever he comes to life. Kermit calls me “Mr. Mommy.” I don’t mind that he calls me that, but I have to be very careful to call him Kermit when I am talking to him and to not direct Kermit questions to Clive himself, because that is rude.  “Um, excuse me Mommy, I am Clivey, not Kermit.” Meanwhile, Kermit watches me quietly and patiently and waits to be addressed. 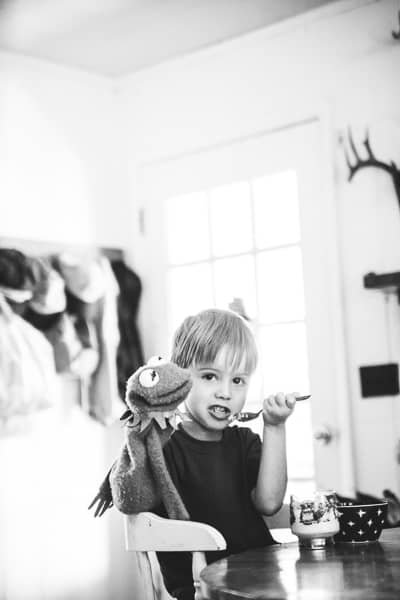 Sometimes Kermit joins us for meals. He’s polite but he doesn’t eat. He (Kermit) says it’s because he’s just a puppet and doesn’t have a stomach.

I was an incredibly imaginative child, myself, so I’m not sure why Clive still feels so enigmatic to me. It’s almost as if he’s unfamiliar, someone who I am constantly getting to know in a way that is different from the other two boys. I think it’s because he’s the one that’s the most like Jeremy. He’s a delight and a joy meet again and again, all these inner workings that have been hidden but are now spilling out. But he does keep me on my toes.

One night I was tucking Clive into bed along with Kermit and another toy frog. The latter speaks with a deep growly voice and was being rather too loud for bedtime. So I paused while turning off the light and told Clive it was time to be quiet.

I hesitated, looking at Kermit’s placid expression, the now quiet and still toy frog, and at my son in between them, who looked back at me innocently and with something else that looked like confusion at my misdirected correction.

I addressed the frog. “Mr. Frog, it is time to be quiet now.”

And I closed the door. Enigmatic and enchanting. That’s my Clivey.

a flatlay and the truth behind it
the long way home