Earlier this week, I ruined my light-and-airy (or as airy as possible) sitting room with a can of Gladden French Grey that I bought on a whim for $18. This was my sitting room in the spring of 2013. I had just repainted it a few months previously (and gotten rid of the superfluous table and chairs). To my dismay, however, I accidentally rendered the room somewhat monochromatic; this meant that in addition to making it light and bright I also made it (in my taste) pretty boring. I know some people like this sort of look, but I don’t. But I had a barely-two-year-old and a six-or-seven-month-old and I didn’t feel like repainting it again. So I’ve just lived with it for the past three years.

I’ve added a few things and taken a couple of things out over those past few years–the ottoman is gone (I can’t remember where. I sold it, maybe?) and that chair in the lower right corner is currently upstairs in the boys’ room after doing an eighteen month stint in Anselm’s nursery. The wood table thingy has been in another room for a while (it’s an odd piece and kind of floats around) and the Cheshire Cat pillow is up in my room because I love it. The curtains are up there, too; not because I love them but because I have CDCS and needed to see them in a different spot.

But over the years, the sofa stayed, the pair of chairs stayed, the piano stayed, the art stayed (though I added a couple of other pictures too), that lamp stayed, and the clock stayed–though it frequently went without winding, because sometimes Jeremy forgets, and I am afraid that I’ll break it if I try to wind it.

I have been trying to bring other accessories into the room to break up the monotony, but everything just really felt out of place if it wasn’t that same grey-green-stoney color. Actually they just stuck out like sore thumbs. Well, everything but the rug from Anselm’s room. It “went” alright, though it’s a bit too small. I wish I had pictures of this awkward in-between stage, but there was never anything inspiring about it, so I don’t.

WELL. It turns out all those things needed was a different background to suddenly “work” together. And by “work together” I mean that, apparently, if you throw enough random things together in a room, they all go. That’s what being eclectic is all about, right? Right?

Here’s the before, again, since things got a little rambly, there: 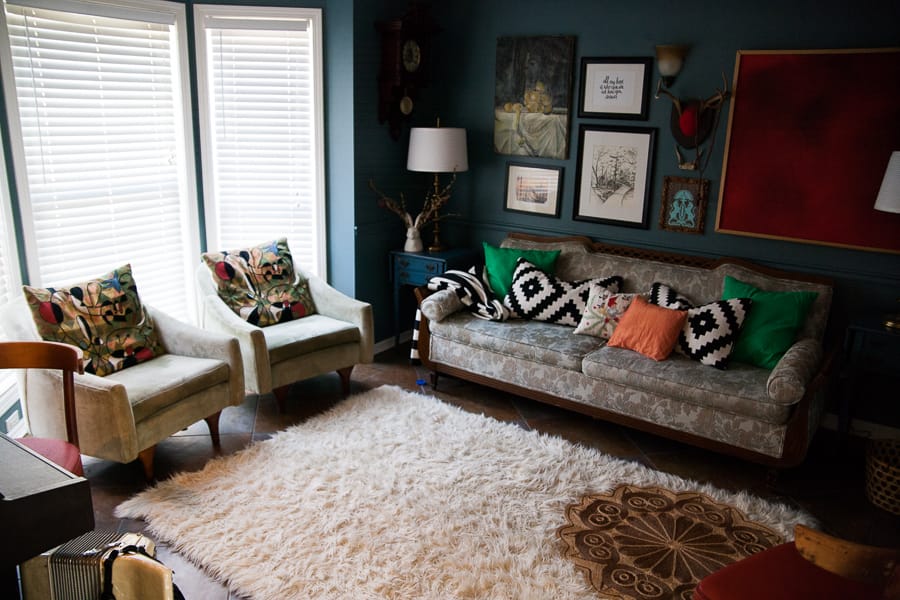 I painted the walls, but everything else is from around the house. Art that’s been in the basement or stacked against the bedroom wall for anywhere from three weeks to five years. All those pillows that I wanted to make work with the other color but just wouldn’t. Other pillows I grabbed out of closet storage because there was finally a place for them. Also, the ceiling pendants lamp from our bedroom, because we don’t really use them up there, anyway.

Let’s play Spot The Play-doh Cap. I didn’t stage these pictures, I just took them. So…real life snuck in.

I picked those gladiolus in June and they’re well and truly dead now, but they’re still kind of pretty so I haven’t thrown them out yet. I was going to repaint the end tables but I like how they just kind of blend into the wall color, even if it’s not exactly the same.

Almost all of these pictures were CDCS cast-offs. That is, they got replaced by other things and had no home because I didn’t feel like I had another place for them. I can tell they’re all much happier now.

I painted the chair-rail half out of laziness and half out of the [misguided] belief that painted moldings feel richer and more old-soulish.

My favorite part–other than being able to actually see my sofa again now that it doesn’t blend into the walls–is having a place for all of these random art things, like my first scherenschnitte (the blue unicorns in the gold frame) and the huge red painting that’s been hanging out in the basement since we moved here eight years ago. I got that painting (and the large green and burgundy one beside it) as payment for cleaning the house of one of my professors when I was in college.

And yes, I play that violin, and no, I don’t play it very well and will not play for you if you come over.

I will play you the accordion or the piano, though.

So that’s it. My crazy impulse room. The whole thing made over for an $18 can of paint and by raiding the rest of the house.

My favorite spot in the house.

that time I went to wal-mart and destroyed my plans to make my house light, bright and airy
master bedroom update