Elvie Kathryn turned ten months on the 3rd of January. These pictures are a bit of a cheat; they are from before she turned ten months. Not very much before, but I am a rule follower, and I feel I must disclose that these photos are actually of a nine-month-old Elvie Kay. There are not yet pictures of a ten-month-old Elvie Kay because so far Elvie Kay has spent her month being sick. She’s stuffy and coughing and feverish and pitiful, though she is getting better, and I hope she’ll be back to herself very soon.

This was a big month for her. The biggest of course was her first Christmas. She got socks and shoes and a toy or two and a new walker for Nana’s house, which I sincerely hope she will be able to get a good use out of, because she is already pulling up.

Already. Now, Elvie Kay is not a child wonder. She’s pretty average on her development. But Mama can’t help but look at her as a child wonder because she’s so far ahead of the curve compared to her brothers. Ephraim wasn’t even crawling yet at this age. Anselm and Clive were both thirteen or fourteen months old before they pulled up to stand.

There are many reasons given for this disparity between the mobile skills of my children: It’s because she’s a girl! Because she’s more determined! She’s more strong-willed! She wants to keep up with her brothers!

But I think it’s because she has no teeth and hardly any hair. And she knows her brothers had scads of teeth and hair by their tenth month birthday. And she has to hold on to her dignity somehow.

At any rate, Elvie Kay has shown them all up with her motor skills.  She likes to crawl over to our pedestal table and get up on her knees on the pedestal or–if she’s feeling particularly daring–the braces of Clive’s junior chair. She will stay like that for quite a long time, very happily. Then she will get up, cautiously putting one foot beneath her, then the other, and then stand up.

And then she will cry because she doesn’t know how to get down.

This month she perfected sitting up on her own. She does it from being flat on her belly, and I love to watch her do it. 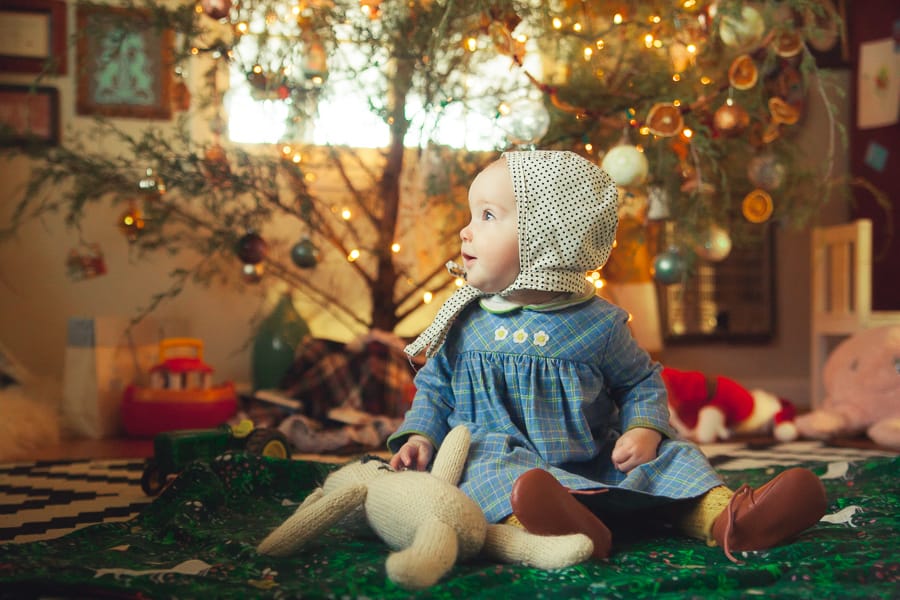 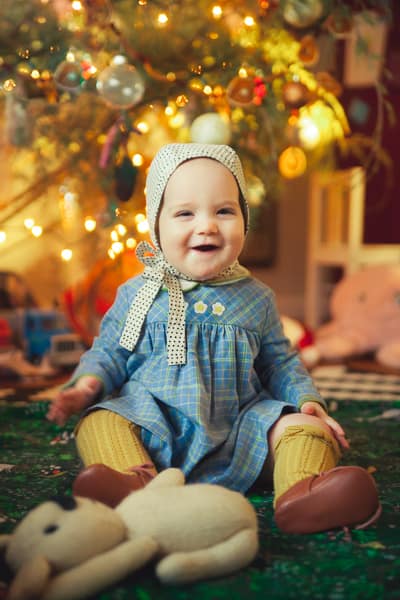 She’s keen on drinking from my cup when we’re eating dinner. She won’t use a straw, but will just drink from the cup if I hold it for her. Don’t worry, I’m almost invariably drinking water. Once it was milk. I’m glad she liked it, because I’ll start weaning her to cow’s milk next month, probably. She’s already starting to lose interest in nursing.

She is also a big fan of toast. Every morning, Daddy and I have breakfast together before the boys wake up: two eggs and a piece of toast with coconut oil and jam. And usually Elvie Kay is up too. If she’s up, one of us will break off a piece of our toast for her to munch on while she hangs out in the johnny-jump-up. We didn’t think she was very into the ritual until one day we walked past her jump-up without handing over the toast. Well! Did she ever raise a fuss over that! And you better believe Daddy tore off a piece of his toast for her. You don’t mess with this girl’s toast.

And she does love to eat. She eats all meals with us now, except her breakfast oatmeal, which I feed to her in our room while Jeremy teaches in the morning. For lunch and dinner she’s right in the middle of whatever we’re having. She really loves tomato-based things–pasta with marinara sauce or chili. She loathes baby food-green beans. She eats peanut butter and jelly sandwiches just like her brothers. Other than those pureed green beans, there’s not a whole lot she doesn’t like.

She’s a friendly little bug, and she’s almost always willing to share a smile and a “wave” with whomever stops to talk to her. She’s started those accidental “words”: Dada, Uh-oh, Night-night (na-na). Things they say but you’re not really sure if they understand what they’re saying. She did say “da-oh” one day when Daddy gave her her precious piece of toast–it sounded very much like “Thank You”, but it might have been “toast”, or even “about time”.  She loves to sing-song around, practicing crowing and sliding her voice up as hi-i-i-gh as it will possibly go.

She loves her brothers. Oh, how she loves her brothers! There isn’t a single person I’ve seen her light up over as much as she does for those brothers of hers. And this month they all have seemed to really begin to interact with her, even more than before.

Ephraim is very concerned with marrying her off. This is because we have already explained to him that he cannot marry her himself. He is strong enough to carry her a little ways–this is very helpful for when she has galumphed her way into someplace she ought not to be.

Clive has learned to perfectly mimic her little cough-laugh that she does when she sees him; now they make the sound to one another with gusto. He calls her Baby-Girl and Ponky, like I do, and he begs to get her up from her naps when he hears her wake up. He can’t get her out of her crib, but he and Anselm toss toys in to her to keep her occupied until I come to get her. I imagine it won’t be long until she learns to use that pile of toys as a step to climb out of her crib.

Anselm is officially Elvie Kay’s partner-in-crime. When he sees her, he sets his jaw and grits his teeth and sings his little Ovie-Kay, Ovie-Kay song that he does, and you can tell he’s just waiting for the day that they can get into mischief together. In the meantime he contents himself by getting into mischief alone and then calling for her. “Come ON, Ovie-Kay!”

She is wiggly–she is hardly ever still. Even getting these photos was a challenge. I went through many toys before I found something she would just sit and look at.

She is a joy. Miss Elvie-Cakes. Madame Herself.

a modest update
dealing with a long, narrow living room