I grew up in this house. Did you know that? We moved here when I was just over two–about the age Elvie Kay is now. About the age Anselm was when Jeremy and I moved back here. I was homeschooled here, and it is safe to say that I know this house very well. 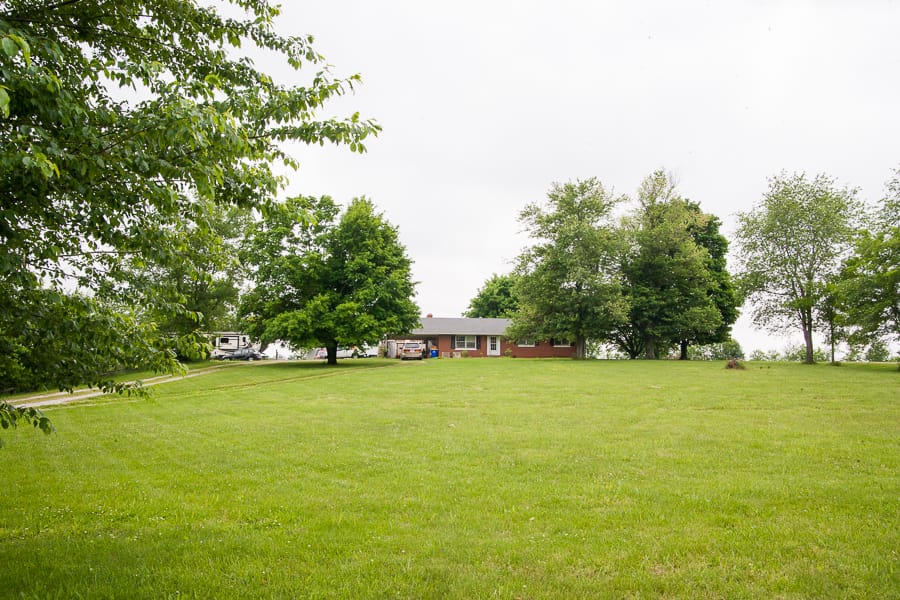 One of the perpetually frustrating features of the house was the wall diving the main living areas. It was (I assume) the typical formal living/informal living division that was common in houses of this vintage. But since we were hardly a formal family, we tried to spread our furniture and living needs across the two halves of the house. It meant instead that someone was always unfairly sequestered away from the rest of the family.

The back half of the house has the kitchen, so it makes more sense to have the dining table there. But then, if you’re cooking or cleaning in the kitchen, usually everyone is in the living room, on the other side of the wall. 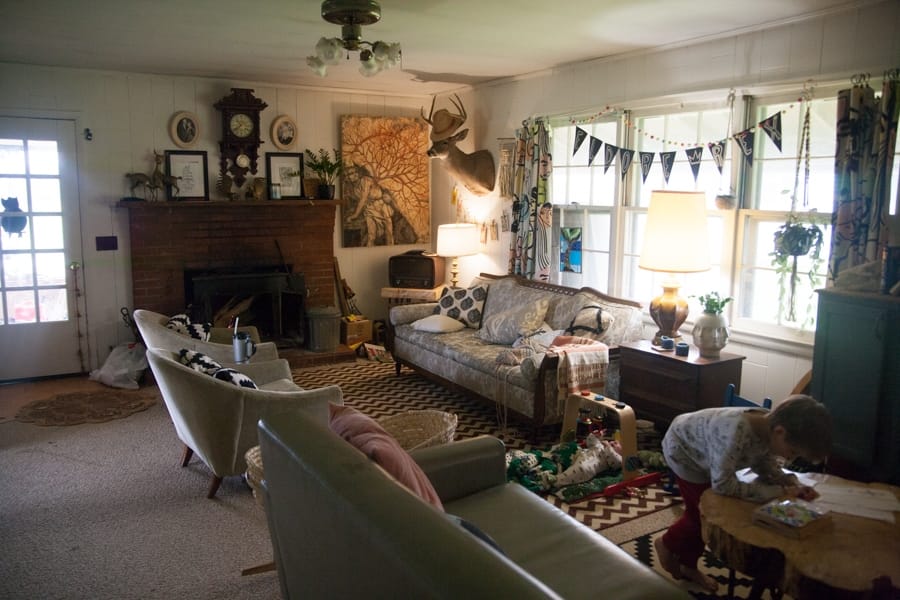 Conversely, if you put the living area in the back half (which also makes sense since that’s where the fireplace is) then you’re carrying hot food and stacks of china or maybe even glasses full of something that will stain through the doorway and into the front half, and if there are small children in the house, the chances are they’re headed through that same doorway but in the other direction…you can see where this is headed.

We had visions of one big Great Room–one where everyone would be together, and no one sequestered or sectioned off. I personally wanted to be able to work in the kitchen and see someone play the piano while I worked. We wanted to be able to enjoy the view of the fireplace from the dining table and from the sofa. And we both really, really wanted to have a space where people and family could come together, enjoy some food and maybe an essay by Lewis, or sing, or just sit and talk.

I’ve written about (and forgotten to update) how to deal with that long, skinny living room,  and I’ve moved the rooms back and forth and then back again and all around for the past two years. But really, the best solution to the arrangement problem was the one that would be the most difficult: The Wall had to come down.

So…naturally…that’s what we decided to do.

And The Wall is a load bearing wall, so a beam would have to be put in to support the weight of the roof. So we thought–while we’re at it–why not loft the ceiling, too? (Because this is how we think.)

We are knee-deep in the renovation now, and have been talking about what name to give this space that will reflect the hopes and dreams we have for it (beyond simply “the living room” or “the great room.”)

I thought of The Commons (from “common room”) but Jeremy informed me that it was the name of a meeting place at the school he used to work at, and it had ruined the term for him. I thought about The Refectory, which feels cumbersome to me. The Finnish word for refectory (so Google tells me) is ruokala, which I really liked, although it was more industrial (mess hall, dining hall) than I wanted. We thought of The Grotto–a beautiful artificial cavern–which Jeremy liked, though I didn’t. I suggested The Hollows–which is sort of like a grotto–which I liked, but Jeremy didn’t. We thought of Locorum (Latin for “the meeting place’s”, and yes that apostrophe is right, and no it isn’t grammatically correct, unfortunately.)

We settled on Colloquium (coh-LOH-kwee-um), which is Latin for conversation. If you have had dinner with us–or breakfast–you may know that we read from the Bible, from our history book, or sometimes from poetry volumes at the dining table at meals. The table’s also used for our homeschooling; the sofa for the reading and narrating of fables and stories. I am happy with a name that reflects the use of the room as well as the hopes we have for it.

And now that I’ve shared the plans and the name, next I’ll have to share what has happened so far–like I said, we are knee-deep in the process (maybe even up to our necks, really) and there is much to tell!

seven months (eldore rex)
making a floorplan for the colloquium