That’s Post Renovation Stress Disorder for those who don’t know terms that I’ve just made up. What it boils down to is this: I’ve spent the past nine years in a constant state of renovation–and it’s mostly done, mostly–and now we’re leaving and starting over again, except this time with four children. And I’m a little freaked out by it.

It first hit me when we started cleaning out the ham house that yes, this was finally happening after hoping for so long, and wow, we are starting all over again a process that will take many years to complete, and oh boy, what am I getting myself into?

People ask frequently if we will be sad to leave this house, the place that we’ve put so much work into.

And well, the answer is no, not really.

I’m not very emotionally attached our current house. Yes, we’ve lived here almost all of our married life. Yes, we brought our four children home to this house. But I have had a difficult relationship with this place that only intensified once I began staying home full-time. I think I’ve finally pinned down why that is–it’s the toll of living in things half-finished for so long.

When we bought the house, I was absolutely clueless. I thought we could do everything we wanted to do in about eight weeks. (HA. HA, I say.) It didn’t take long for reality to set in, and those eight weeks became eight months and then eight years fairly easily. I know a house is never “done”, but we’re talking about more lacking than just an inevitable change in aesthetic and the compulsive paint purchases that follow them.

And so, I’ve compiled a little walk down Memory Lane. Just for fun! …Breathe. 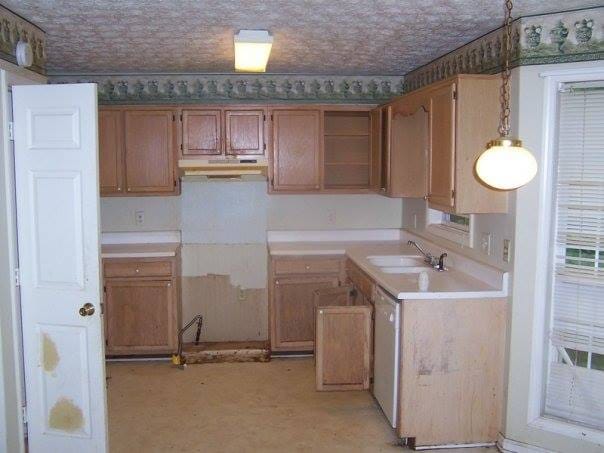 Here’s the kitchen when we bought the house. It was Nasty (yes, with a capital “N”.) The cabinets were falling apart and couldn’t be salvaged, so the whole thing was ripped out. We didn’t have a kitchen at all for an entire year. I have many fond memories of eating ramen upstairs in the smallest bedroom (which had been finished) while watching Star Wars on Laser Disc (true story.) 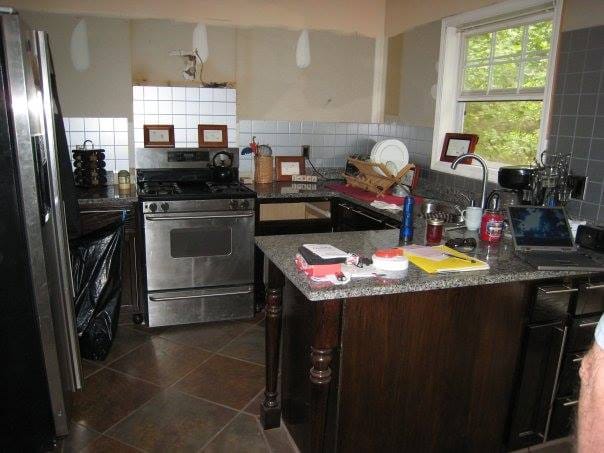 We got the lower cabinets and a partial backsplash in, and appliances and a sink. And then we stopped. It looked like this for almost three years while we moved on to other projects. 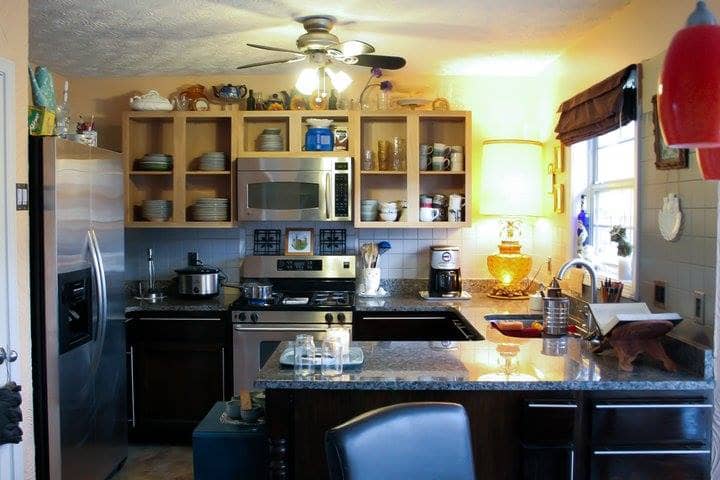 After Ephraim was born, we put in some upper cabinets and our microwave that had been sitting out in the garage until now. It stayed like this for another three years.

Right before Anselm was born, we changed tack and ripped out the upper cabinets we’d put in, going in a different direction entirely. This is the kitchen as it exists today, though it never did get those cabinet doors or the trim and moulding it was supposed to get. It works and it is way prettier than any of its previous incarnations. I will miss this kitchen. But man, the process was a doozy. I hope to pretty much duplicate the look in the new house, but I hope it doesn’t take seven years to do it.

The very first time we walked into this house, we knew that huge wall in the living room would be perfect for bookshelves. It was a couple of years before we could get to it, and during that time I did my best to just do the best I could with it and make it livable (once all of the boxes were out of it.)

Then in early 2010 we were finally able to paint it, and I rearranged everything and had what felt like a real living room for the first time since we moved in.

Then just a couple of weeks later, the work on the bookcases started and the room turned into this:

And stayed that way for months.

(They’re still not done in the above picture–and what you can’t see is the huge stack of plywood that is taking up the entire corner of the room just out of the camera frame.)

All said, it took about three years for the bookcases to be done. In that span of time we had two children and finished a couple of other rooms, one for the second time.  I left my part-time teaching job to stay home full-time, and the first thing I saw every morning when I came down the hallway was a wall of half-finished bookshelves staring back at me. Those bookshelves became my arch-nemesis fairly quickly, which is probably why I’ve taken maybe three pictures of them in the past few years. Of course, they look great now (except that they’re brown) and they’re incredible considering Jeremy built them himself and had never built anything like them before. But (I shall repeat) my word. The process.

This is the before picture I usually use for our master bedroom. We took this picture when we first bought the house. For three years after we moved in (always three!) it was used for storage, and looked more like this:

Storage. And yes there is a mattress in there and yes we did sleep in there like this, and no I don’t want to talk about it except to say that it was finished a few months before our first child was born, thank goodness.

The process was quick–some of them were! This one was done in a week. Of course I was several months pregnant at the time and may or may not have been extremely annoying and naggy during the process.

Transforming the the guest room into the boys’ shared room was a week-long process, too. Come to think of it, I was pregnant then, too.

So…maybe the solution to a fast renovation is to have another baby?

DIY renovations are hard, you guys. They take a long time (and always longer than you think) even when you’re not doing everything yourself. Don’t be swayed by the masterfully edited television shows that wrap everything up nicely in an hour.

Are we going to do it again? Oh, sure. We can’t help it. It’s in our blood. Besides, the house kind of desperately needs it…I’m hoping that, since I grew up there and have already seen the house at its best and worst (so far) that I won’t develop any long-standing bitterness against the place. I can, of course, always escape to the Ham House.

Can anyone relate? Any other DIY-ers out there got post-renovation stress?