It was a half-past four when Elvie woke this morning, grumbling and complaining after having flipped herself over to her back (she hates that, but won’t stop doing it.) I turned on the lamp against the darkness and went to get her from her crib. It seems early, but it’s only half an hour earlier than when I want her to get up and not so early to feed her and put her back to bed.

I sat cross-legged on my bed while I fed her, and once my eyes stopped closing of their own accord, I picked up the devotional that was sitting on the bedside table. It was by Charles Spurgeon and part of a two-book set, one book having readings for morning and the other having readings for evening. And before I sound too holy, let me say that this was the evening book I was about to read, and I did so because I hadn’t been keeping up with reading the evenings ones, and I also wasn’t exactly sure where the morning book was... But I’m trying not to look at my phone first thing in the morning, and the devotional was available, so I picked it up and turned to the entry for today. Well, for this evening, anyway.

The entry was based on 2 Timothy 4:18, the heavenly kingdom. And in it, Spurgeon described that kingdom. A place of victory. A place of active service–of restful service, something I’m beginning to come to an understanding about. A place of community, of communion, of love and of joy. And then this line arrested me:

[…]we shall not sing solos, but in chorus shall we praise our King.”

It’s hard sometimes to describe to someone else that moment when something catches your attention and how that spark ignites so many trails of connection and emotion in so many directions–it’s like a firework exploding in the sky, when you can see how each little bit of chemical reacts with the one next to it, starting at the center and going heading outward in an instant, and after the fire goes out you can still see the smoky evidence of the trails they blazed. Or perhaps it’s like the trails that snails leave behind, if a group of snails started in one spot and all moved in different directions at once, and if they did it much more quickly than snails typically do, and it they weren’t quite so moist. But I digress.

I read that line and immediately felt the joy of connection of several thoughts that had hung suspended and isolated in my mind for quite some time. A chorus means parts. Parts mean a place for everyone. A chorus means harmony; each person’s part works in balance with the other parts being sung. A chorus means humility, because without the other parts, the song would be boring at best and nonsensical at worst. A chorus means community; while discord and disharmony have their roots in music, their synonyms–strife, enmity, division–may not be musical, but are still accurate to describe a chorus where the different parts are abandoned, or envied, or coveted, or derided as useless.

I am an alto. If you’re not a musical person, that means that my singing voice is on the lower end of what is average for a woman. It means that if I’m listening to a woman sing on the radio, chances are she’s a soprano and singing too high for me to sing along. Altos do harmony most of the time, particularly in older church music or in choral works where there is more than one part singing. When I sang in Carmina Burana, we altos did occasionally sing a leading part, but when we did (unless I am misremembering) the sopranos were not singing. Or they were singing and we were singing their part with them. When you’re an alto in a chorus, in a community of singers, you’re in a supporting role 99% of the time.

I have often thought that being a homemaker is an awful lot like singing alto.

Have you ever paid attention to an alto line before? Often there is very little variation in the notes sung. I have frequently sang songs where my part was the same three notes repeated over and over. Sometimes my part was only one or two notes for a many measures.

Of course, not all songs are like that! Some alto lines have a lot of variation. But they don’t make much sense taken out of the context of their intended role. Removed from the rest of the parts, an alto line isn’t very pretty. It doesn’t really sound like anything. It sounds sort of chaotic, random, and not very well thought out. Like it has no place. An alto line on its own just doesn’t make any sense. A boring alto line out of context is a most bemusing, lackluster thing. (Excepting, of course, a bass line out of context.) I made a little video to illustrate this. (Please excuse the fact that the piano needs tuning and my fumbling playing!)

But the joy of singing alto is the brilliance of the product of the community of voices. It’s hearing all the parts come together in the way they were intended. There is very little glory in any single part–even the melody, while lovely, will lack the potential of all the parts together.  A song written for four different kinds of voices sounds empty and hollow when one of those pieces is missing–even those boring, mundane three notes over, and over, and over. Here’s the song with the alto line omitted.

The thing about singing alto is that it’s a part written for me and for people with my particular strength and range of voice. There’s a tremendous freedom in that, and it calls for your best contribution: a full-throated song, joyfully sung, and the pleasure of hearing the harmonious result. (Which is why I believe that, while God may not prefer a hymn to its single-part modern worship equivalent, most congregants probably do. But–to borrow a phrase from Ende–that is another story and shall be told another time.) Here are all four parts united again.

It can be frustrating to be a stay-at-home-mom–I was going to say that it is frustrating these days but I don’t really think it’s much harder now than it’s ever been. I don’t even like the term. I try to use “homemaker” as much as possible. The temptation is to bemoan the repetitive nature of the quotidian. Another coping mechanism is to use social media to draw attention to the work I do. There are no Academy Awards for these kinds of supporting roles. But like an alto line, my daily work out of its context is nonsensical and can even be misleading. It’s in the harmony of the whole that the Glory shines.

If I’m feeling discouraged in my role–if it doesn’t seem to make much sense why I do what I do–could it be because I’m examining it on its own instead of in the community it was intended for? 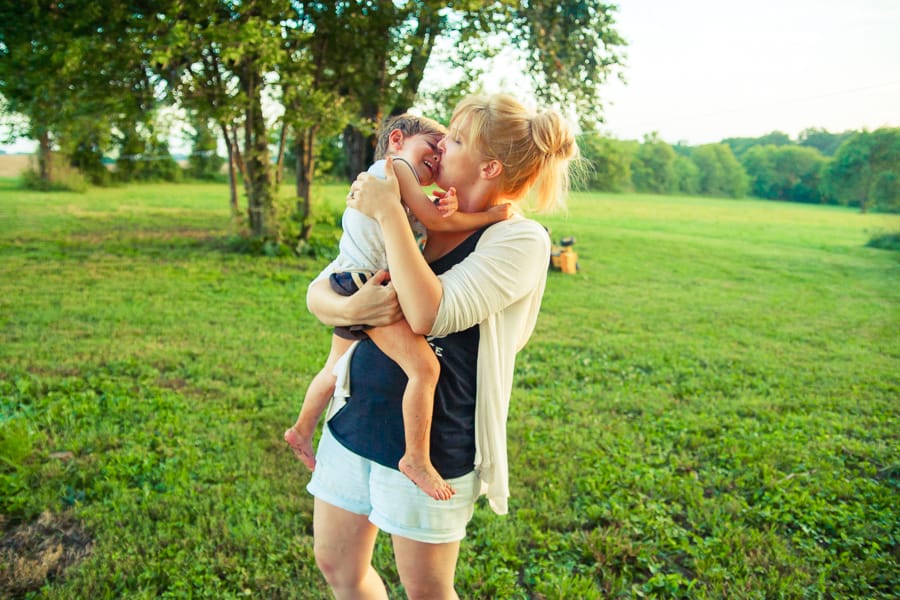