Elvie Kathryn turned seven months on the third of October. 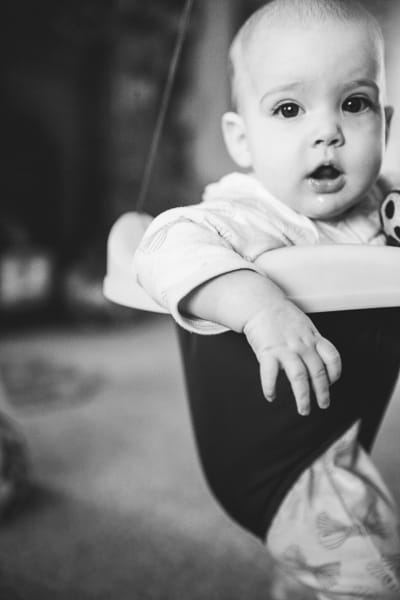 She is one busy-busy wiggly worm. Just before she turned six months she learned that she could busy-busy wiggle herself places, and she abruptly stopped rocking on hands and knees (as she had been wont to do) and started just doing an uneven army-crawl-toe-kick hybrid to get from place to place.It sort of looks like she’s swimming and it sort of looks like she’s crawling like a lizard, and I call it galumphing and it’s probably exactly what Christopher Robin meant when he said the heffalump he saw was “just lumping along.” It’s very effective in its purpose, but it means I’ve still not got a proper crawler (she’s in good company). It also means she’s a terrible sitter as each time I try to sit her up, she sees something she wants and immediately goes galumphing after it. 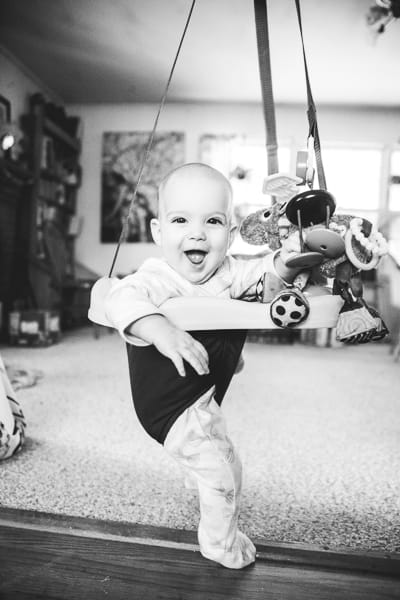 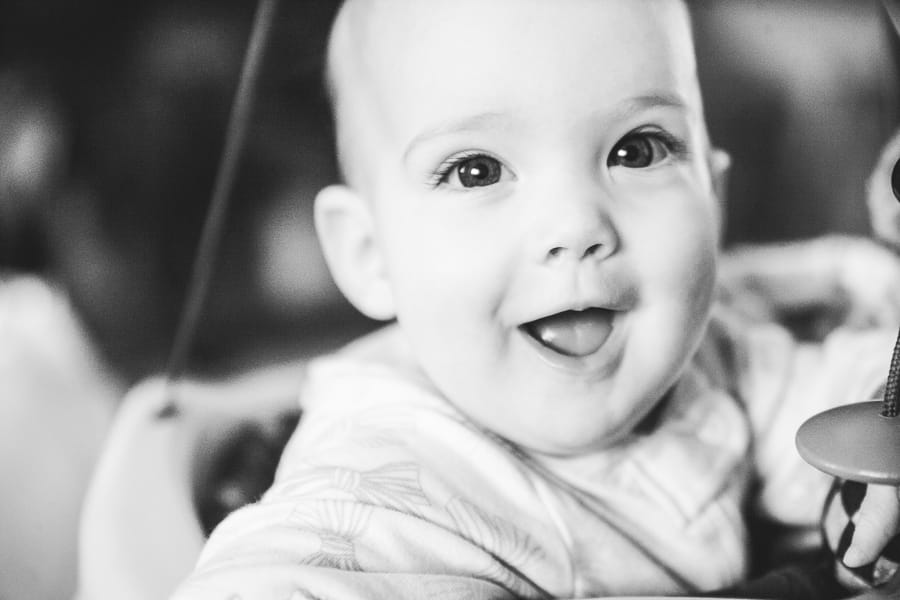 She’s stopped sleeping in church; she instead uses the time to be busy-busy-wiggly and to try her best to add to the preaching with emphatic squeals and screams and that odd squeak-while-you-suck-in-your-breath sound that she’s really quite good at. She also likes to scritch-scratch the fabric on the pews, and will all but do a backbend out of your arms to be able to reach it and drag her fingernails across it, scritchy-scritchy-scratchy-scratchy, which is also an excellent way of drowning out the sermon, in case you’re wondering. Should she tire of the above two activities, she can always make eyes, stick out her tongue, and wave at the people sitting around her. Toys may be offered to her but will likely be thrown under the pews two rows ahead (true story). She will, however, quite happily munch on Mama’s kitty phone case, though she will also make squeaky noises on it with her gums. She is not very good at being quiet and still.

At home she has a lovely basket of soft, safe-to-chew baby toys and things, little bears that the boys have loved, rattles, etc., and she despises it. She will go to great lengths to get ahold of the boys’ matchbox cars and to try and eat them; with three big brothers in the house, there is always a stray car that she is busily galumphing after.

She’s got a little bit of hair coming in, though it’s coming in quite slowly, and it still looks rather reddish. When she gets angry, the skin behind her eyebrows turns bright pinky-red and makes her hair look even more strawberry-blond. I’m not entirely sure if her hair is red or if it’s just the pinky-pink of her skin. Her eyes, likewise, are just confusing. They’re not blue, but then again they sort of are. They’re deep steel-grey around the outside but a very pale tan in the middle. I just find it befuddling, but the lady at the Gold City general store says they are just grey eyes. I don’t know where she would have gotten grey eyes (someone on Jeremy’s side of the family?) but they don’t seem to be changing at all.

She’s fond of her bilabial consonants, and even greeted me with a “Ma-ma-ma-MA!” one day as I came in from outdoors.

She’s excessively smiley and happy, so long as she is not too tired, though she is following her brother Clive in keeping a careful list of People She Likes and People She Doesn’t Like. On the former list are, of course, her family (particularly Ephraim, whom she adores) people she’s familiar with, and random older men. (I don’t understand it, but Clive was the same way!) On the latter list are most new people. She does take a little bit to warm up to people, although she will always smile from a safe distance.

She is very content to be on her own. When she wakes from her naps, she flips over to her back and just hangs out until I come to get her. I have to be careful to watch the clock because she generally does not cry or make noise to let me know she’s awake. She sleeps twelve hours at night, and while she won’t nap much in the car anymore, she will take a double-nap to make up for a missed one. She’s the first child of mine to do that (that I can recall) and I’m very thankful for it.

The boys call her Elvie Kay, Baby Ovie (Anselm), Miss Kay (I love that one), or Baby Girl. Daddy calls her “Kunchkin”. I call her all sorts of things (Ponky being the most common) but mostly I call myself one lucky duck for having her around.

late september
what we read (september)