“Why don’t you go out and jump on the trampoline?”

It was worded as a suggestion, but Anselm knew from experience that it was anything but. He was dangerously close to surrendering to his boundless energy and dashing around the Colloquium, an action that is strictly forbidden, given his own proclivity for dashing and then tripping and then falling into things.

“Will you watch me jump on the trampoline?”

It was worded as a question, but I knew from experience that it wasn’t something to say “no” to. His voice carried the hope that I would watch his leaps and flips and approve, and my own obligations were at such a place that I could assure him I would.

“Let me get Beatrice to feed her, and I will watch from the window while you jump on the trampoline.”

He dashed outside with a whoop of joy, and I walked back to the bedroom to get the baby, bringing her back to the window that faced the backyard.

“Are you really going to watch him jump on the trampoline?”

The question Ephraim asked carried a note of humor and maybe of bemusement, and I answered, tersely, “Of course I am–I’m not a liar!” before wondering why he would ask. My memory is not the best these days, but I never intentionally do the opposite of what I say I will. However, I know there are times where I state something and then fail to follow through for other reasons, because sometimes the children remind me and I have to confess that I have forgotten.

“Why don’t you go outside to watch him jump on the trampoline?”

Now that was a better question–why don’t I? I find myself indoors far more than I should be, and far more often than I should like to. I agreed with Ephraim’s suggestion, told him so, gathered up a blanket for the baby, and headed out to the back porch of the Ham House where I could sit and watch Anselm jumping.

The trampoline is set in the shade of a large rose bush and what is perhaps an elm tree. The sun had begun to wester, setting the leaves of the tree a brilliant golden-green; the tree’s shadow was a deep blue that made Anselm appear to have been dipped, clothes and all, in a pot of blue dye. He leapt and jumped and flipped and yelled “Mom, watch this!” his missing teeth causing a whistle on the final sibilant of the command. I rocked Beatrice and watched and shouted back, until the blue shade reached the porch and he climbed down from the trampoline, sweating and happy, and came to sit beside us. 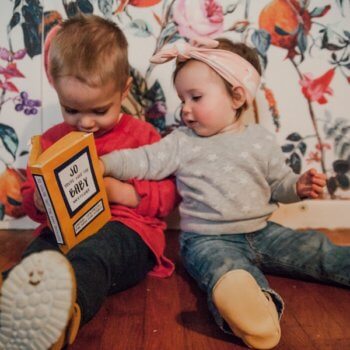 I tell myself every pregnancy that this time I will be better at documenting it, and I never follow through. I am trying to remedy this; I am actually typing this post before we have even announced the pregnancy, so that I may capture all of these thoughts at their freshest.