Elvie Kay turned nine months on the 3rd of December.

I have to stop there at that date for a moment and reflect. December 3rd is the day I had a D&C after my first miscarriage in 2007. It’s the day I found out I was pregnant with Clive in 2011 (was it really that long ago?) I am grateful to add another happy marker to that day–three-quarters of Elvie Kay’s first year.

Every month that passes for a baby is another mass of amazements and new abilities. Elvie has grown so much in the past month–her personality has grown, if that’s even possible! She started to really resemble her brothers in some ways and to starkly differ from them in other ways. She’s more herself than she’s ever been before. It’s both a joy and a profound perplexion; how can this little person, the fourth to come from us, just us, be so like her brothers and so unlike anyone else we have ever met? I suppose that’s why these monthly updates are so fascinating for me. 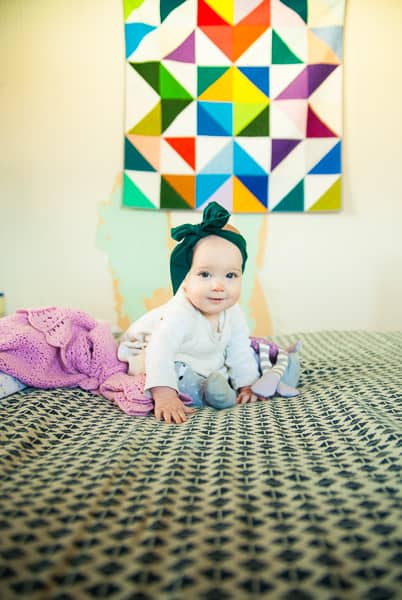 Let me start with her little red nose. We’ve all been sick this month, but we’re all mostly over it, but her nose was not red while she was sick. It’s been red the past couple of mornings when she wakes up and gradually returns to normal over the course of the day. It doesn’t seem to bother her and it makes her terribly cute, and I’m sure it’s not because she’s been drinking so I’m letting it go. I did want to address it, however, should anyone think that I had doctored the photos for the Christmas season. Her nose really looks like that. 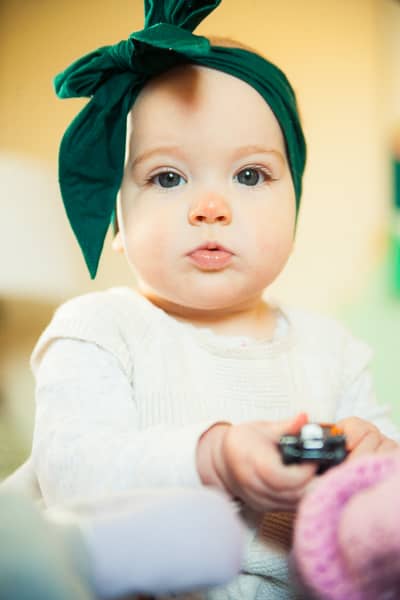 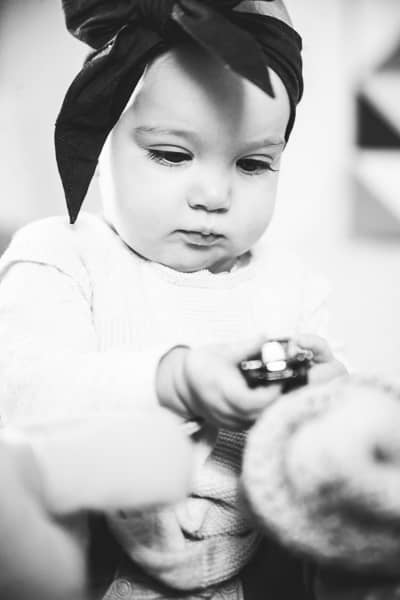 That second picture is a classic Anselm face. Elvie Kay doesn’t often remind me of her closest brother, but this particular set of the mouth is a page straight from his book. As a baby, Ephraim had a variation of this look, except his came with brows soberly knit together in concentration. This is a look of serious thought, of figuring-out, and to be perfectly honest, she rarely wears it, to my knowledge. Her mobility means her focus is something of the drive-by sort. She looks at something briefly, then moves on, and on, and on. In the house we frequently (every few minutes) stop and ask, “Where’s the baby?” And she’s somewhere, anywhere, under the table, under the buffet, down the hallway, trying to climb the hearth. I am ever so glad we are in a house with no stairs, a smaller house, and she is able to be found quickly.

She is very like Anselm in her independence. She adores her brothers, loves to have them talk to her, to play with her, to make her laugh, but she is very keen on doing Her Own Thing. She’s an expert peek-a-boo player and a champion pooper. Sorry, Girly, but I had to make note of it.

She is a carbon-copy of Clive in terms of tenacity. This child and her drive! Clive constantly confounded my efforts to ever distract him from whatever goal he had put his sights upon. I could never hide things from him, or divert his attention, even as a baby! Elvie Kay is every bit as hyper-focused as Clive was, though she punctuates it with a burst of temper, which I haven’t the slightest idea where she picked up. This week we were at a prayer meeting where Elvie Kay decided she needed to see the prayer list.

Would a toy do instead?

How about a different toy?

How about a piece of paper, not the prayer list, but every bit as crinkly and paper-y?

And what did she do with it when she got it? Take a bite out of it, of course.

Is she more dramatic than the boys ever were? Yes and no. She’s not more dramatic than Clive ever was (0r is, for that matter.) She has already learned that if a brother takes one’s toy, the proper thing for one to do is to screech like a banshee until he gives it back (which he usually do very quickly) and if Mama tells you “No,” to flail at her with both hands. (We’re working on that one.)

Ephraim started throwing temper tantrums at twelve months, and I can see we’ll likely be going down a similar path with her.

She’s not very empathetic. Some babies are sympathy criers, but I haven’t noticed this with her. If one of the boys is crying, she generally giggles at them. She laughs at me when I scold her if she bites me while nursing. Ephraim used to be able to growl and frighten her, but now she growls back. She’s a tough little cookie, and she wields a totally disarming and charming Scrunchy Face, which I didn’t manage to get a picture of to post here.

But back to Ephraim–like her eldest brother, Elvie Kay is not a cuddle-bug. In fact, whatever the opposite of a cuddle-bug is, that she is as well. She nurses, and when she is done nursing she flails herself backwards, twisting so she can get down. I don’t mind this too much, as it’s about how I feel about it after nine months of nursing, too.

She has a lovely basket of toys to play with. Each of the boys has had the same. I would sit them next to the basket, and they would pull each toy out one by one and inspect it, taste it, play with it a moment, then cast it aside and get the next one. And after they had pulled out all the toys, I would put them back into the basket and they would do it again. But Elvie Kay sits next to her basket of toys, glances at it, then pushes it aside as she rolls over and heads for the hearth to practice climbing, or maybe to the table to see what kind of food Anselm dropped during breakfast.

She does have a few favorite things–my old cat phone case, a hand mirror…That’s all I can think of, actually. She’s lost interest in the boys’ cars.

She still lumbers along in her army crawl, despite being able to get on all fours and even crawl a few steps that way. She pulls herself along with her left arm and pushes with her right toe, and she can cover an astonishing amount of ground in a very short time with this method. She is learning to push herself around in the walker, though she doesn’t get too much practice as the boys like to push her around it in themselves. This is what happens when you’re the Baby Sister.

Her eyes are still the strangest color. They’ve completely left off blue and are now somewhere in the vicinity of grey-green. You may notice in these photos that they actually look a bit like the color of the bow she is wearing. This, like her little red nose, is true to life, and is not a trick of the photo editing. What color they’ll end up is a story for next month, or perhaps the one after that.

I have always tried, in these updates, to mark both the positives and negatives of each child’s personality, to show the whole picture. This girl has some serious quirks, but she is beyond sweet and so precious, and really the darling of the family. All her brothers want to marry her (we’ve had to have a few serious conversations about that) and they all make it their mission to exasperate and fawn over her in turns. It’s an awfully comfortable position she’s landed herself in, to be sure.

I think she knows that.