Newborns change so fast, it seems like you spend the first few months of life with an infant thinking you’ve gotten everything figured out only to have everything upset on its head in a matter of days. Elvie Kate has expedited this process somehow, fashioning herself into the most difficult of my four children to pin down. It’s as if she’s literally changing her mind day to day. Getting an early start, I guess?

I told my mom that I felt like I was watching the wheel on a slot machine slowly go around and around and trying to guess where it was going to land. “It’s an orange! No…cherry! No…a seven. Definitely a cherry. Well, maybe an orange…? A SEVEN. I know it is. Well…?”

I’ve spent most of the week thinking I had another Clive on my hands: easily overstimulated, difficult time falling asleep, super-sensitive, etc. But then a few changes seemed to bring things back to normal, and she seemed more like Anselm. But then she’d throw in a curve ball and I’d be back to my mental inventory of how I handled Clive. Then the next day she’d be different again. I’m glad for my experience with three very different babies to help guide me this time around, but I also wish sometimes I could wipe my memory and just tackle this one as she is without trying to compare. 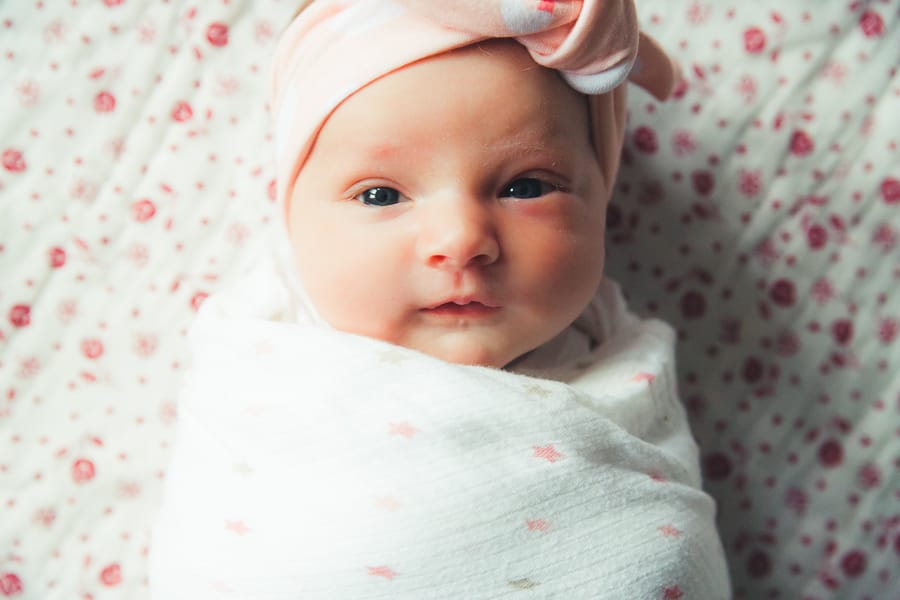 The first part of the week was marked by two very, very difficult days. The first day I thought was because we had been to church and then to a friend’s house and she was just all riled up. (See: Clive.)

Then the next day we were home all day, but her behavior was the same. Restless, wouldn’t sleep, crying even when I held her, wouldn’t nurse well. All day, tapering off in the evening and disappearing by bedtime. I recognized the behavior. It was the same thing Anselm did when he was reacting to the caffeine in my coffee.

So the next day (this is Tuesday, if you’ve lost track) I skipped the coffee. We had an appointment in the morning and she had to sit in her carseat. 66% of the time she hates the carseat and just cries in it. Well, this morning she didn’t.  Then, when we got home, she slept peacefully all day, eating along her normal preferences, very predictable. I figured the coffee had been the culprit. (See: Anselm)

On Wednesday, though, she was back to her old tricks. Fitful day, restless, wouldn’t sleep, not as bad as Sunday and Monday but very close. And I hadn’t had regular coffee, so I was taken by surprise. I had had decaf, though, and I’m wondering if even that very small small small amount of caffeine is what messed her up. She was also due for that three-week growth spurt, though, so I wasn’t sure if that’s what I was seeing. It was a long day that sent me back to my PTSD from Clive. (Not really, but he was one tough newborn-cookie.)

On Thursday I skipped even the decaf and she was fine. So…Anselm. I think?

Then on Friday this shirt came in the mail: 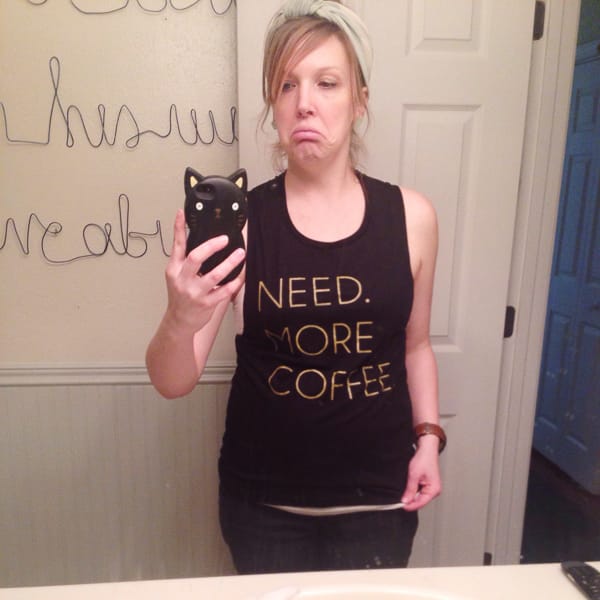 I’ll try the decaf again next week just to be sure it wasn’t something else bugging her that day. I’m pretty sure she started her growth spurt last night (up every two hours all night and all day today) so I don’t think that was her problem on Wednesday.

While our days have been kind of hectic, nights have been good. Elvie’s been very good about putting herself back to sleep at night after nursing. Other than last night’s up-every-two-hours-bit, she’s still averaged about every four hours at night this week. She’s also been waking up consistently at right around 7 a.m. for that first feeding, and that’s kept our days much smoother (or, as smooth as they can be.) Bedtime has been more erratic–she always  seems to nurse around 7 p.m., no matter how crazy our day has gotten, but she will not stay asleep after that feeding. (Umm…like Clive.) That will come with time, though. It took Clivey twelve weeks to settle into a normal bedtime, and when he did, he started sleeping through the night within a week.

After this week, I think I can change the CHI (That’s Carseat Hatred Index) from 66% to maybe 27%. She still has her moments, but this week was so much better.

When Ephraim was a baby, I remember reading in a book that some babies cry before falling asleep just as part of their unique way of blowing off steam. I didn’t disbelieve it, but I never witnessed it, either (except maybe once or twice with Clive.) Well…I got one. Elvie is one of those babies. It’s bizarre–she doesn’t always do it–but she does it a lot on her normal days. It’s maybe two or three cries as she settles down. Wah, wah…asleep. It’s the craziest thing, and I try to give her space to do it if she needs to, though seriously I hate hearing it.

I have a feeling she’s going to have a HUGE personality.

I wrote in the first week that I was having trouble coping with basic household noise and things like that. Last week that wasn’t an issue; this week it was again. I chalk a lot of it up to Elvie’s days of fussiness. It’s really hard to field questions from a three- and five-year-old when you’re also juggling a crying baby. Also, it is hard to find a nice way to tell the three-year-old that you know the baby is crying and that he doesn’t need to tell you that over and over again.

This week I felt like I’d regressed a ton in the postpartum emotion department. I was so raw emotionally that I was downright rude to an associate at the grocery store who kept throwing “mom with lots of children” cliches at me every time I ran into him. And usually those don’t bother me at all! (Incidentally, there should be mandatory training for store employees: if you see a mom shopping with three small children–plus a baby who has decided that, actually, she doesn’t like the carseat at the moment–don’t try to be funny. Ask if you can see her list and help her gather what she needs so she can take said baby OUT of the carseat so baby will stop screaming. Just saying.)

I think one of the hardest things about the newborn period is understanding how much time has actually passed. When you’re in the trenches, it feel like you’ve been doing it forever, and it’s easy to forget that it’s only been a few weeks. (Conversely, it’s easy to get caught up in it and totally miss the passing of time, too.) I was very happy to re-discover Val’s newborn sleep hierarchy this week, which I had completely forgotten about.

Elvie is really coming into her own look, and has adopted that bright, happy newborn expression where they look around and almost seem like they might crack a smile. I am looking forward to her smiles! But for now I’ll just take quiet week with no weird days.