What’s a colloquium? Click here for our vision & the backstory on this room.

We planned for a while to put built-in bookcases in the corner where the piano’s going (here’s the post about the colloquium floorplan in case you’ve forgotten where that is) but I assumed the design was pretty much solid in Jeremy’s mind, so I didn’t think too much about it. Until the day I asked him what said design was–and he said he didn’t know yet. 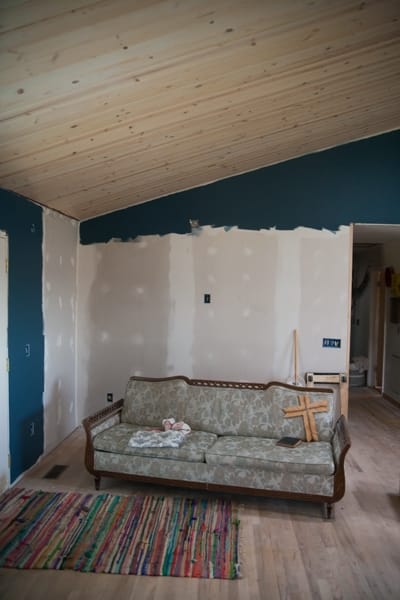 the piano goes against that back (unpainted) wall.

Well, straight to Pinterest I went, looking for ideas for DIY bookcases. We have floating shelves in the kitchen and to the right of the fireplace, but I wasn’t sure I wanted to duplicate that over in this corner as well. Plus we had more random items than just books–like a wooden recorder stand and a banjo to hang–that we wanted to incorporate in the wall too, so just regular shelves weren’t really what we had in mind. To top it off, the drywall wasn’t put in correctly, so the wall is not very flat. We left it unpainted because we intended to use plywood for the back of the bookcases to compensate for the blumpy wall. Shelves would mean using the wall itself–bare–and I wasn’t sure it could be made to look nice.

But we decided to try it anyway, and we spent a day or two filling holes in the drywall that we didn’t think we’d have to fill, and sanding things down to be as smooth as possible.

I drew out a hypothetical design:

Then I taped the shape of the boxes onto the wall. I had help for this, thankfully, because I had to adjust a couple of things from the drawing, and also because apparently I’m very bad at taping a straight line. (Also, side note: in my experience, tape on a wall always takes paint off, whether it’s masking tape or painters tape or whatever kind of tape. So, we did have some paint come off with the tape, but only a smidge and only where the boxes would cover anyway.)

We planned on having the shelves be 8″ deep, but a bad saw at Lowes cut the plywood into uneven strips, so to compensate the shelves had to be cut down smaller–closer to 7.5″. This meant, though, that they let us have the plywood for $10/sheet instead of the normal price of $50/sheet. We needed four sheets, so we got the wood for the project for $40 instead of $200! That was an unexpected blessing.

Jeremy cut the boxes to the taped dimensions and used glue and a pocket jig to assemble them.

Then he routed the front edges, filled the screw holes and any imperfections in the plywood with drywall mud, and sanded the boxes. We used drywall mud because we planned on painting them.

We decided to make more pocket holes and screw the boxes directly into the studs on the wall at several points.

Then we just had to paint the boxes white and attach them to the wall! This was the least simple part of the process, but we made it. Jeremy even did a lot of them by himself, though the bigger ones needed two sets of hands to attach them.

There are a couple of spots to touch up and a couple of fixtures that need to be installed (like the smoke detector, which resides in one of the boxes) but other than that, this project is practically done!