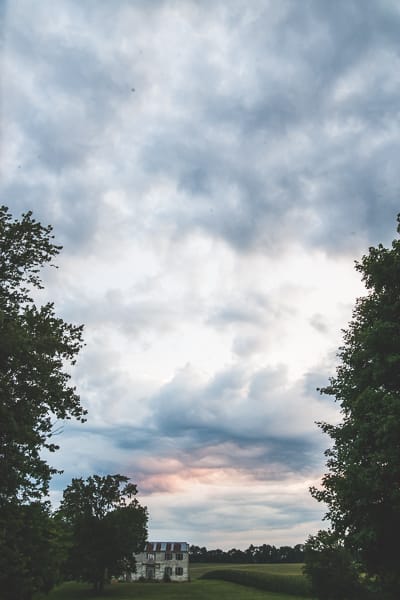 a cloudy sunrise in july

Two weeks after Ephraim was born, my grandfather passed away.

So we packed up our newborn and headed to Kentucky to the funeral. I was a brand-new parent, and I was suddenly and painfully aware of the shifting climate of the family. My dad’s family had always been close, making sure to spend holidays together and hold reunions and reunite frequently, the families of the five Jarboe siblings convening at my grandparents’ house like so many streams returning to the spring. For a child, this was an incredibly comforting and secure ritual, and one that was taken for granted for a long time.

My whole life, I had been the grandchild in this family structure–part of the young crowd (quite literally–I was the second youngest grandchild), a member of the tertiary level of the generational chain. And Ephraim’s birth and Grandpa’s death signaled a shift in the chain: the tertiary link was now the secondary. Everything had moved up–the  spring that sourced our streams was, in a sense, drying up, and now my own parents were in that role, and I was in what had always been theirs.

And all this was happening, and we were hundreds of miles away from it, in a city that never felt like home.

At this time, my parents were in the middle of trying to sell the farm I grew up on. After the funeral, we went with them to look at a couple of houses. I suppose it doesn’t really need to be said that rural Kentucky was a little more affordable than suburban Atlanta, and more interesting–Jeremy and I couldn’t help but start dreaming of the possibility of moving back up to the Bluegrass State.

It was a dream that would haunt us for the next several years. 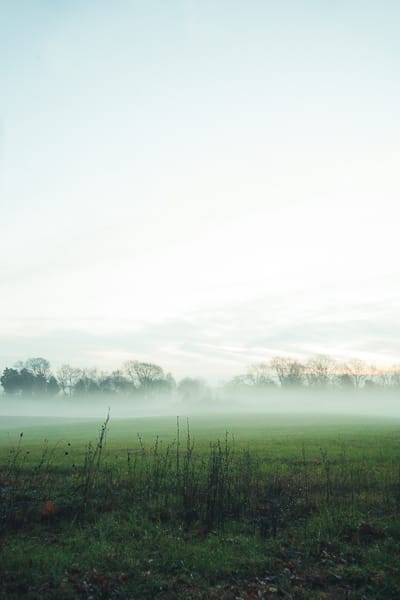 the eastern field in december

The principle pull was not location, but family. We looked at houses and job opportunities in Kentucky, in Florida, in Colorado. Even Tennessee, which was at least closer to everyone on my side of the family than we were at the moment. But there was not really anything even available–well, there was basically nothing available in Jeremy’s line of work. No opportunities at all. There were a couple of long-shot “maaaaaaybe this could work?” job openings, but they were a little too out-there, and neither of us were willing to take the risk of taking them on.

So we stayed put, and we looked, and we prayed, and I wrote about it privately on journal pages that I subsequently ripped out, and wept over it not a few times.

After a couple of years, I tried my best to put the dream to rest and just embrace where we were. It was easy in some ways, because we have such a great community of friends here, and difficult in other ways, like the fact that we were still without the most important community: our families.

Also difficult was the fact I was at home full-time with our rapidly growing family of boys, their activity and their energy, and no place for them to expend it except places that required packing everyone into the car and driving, driving, driving. I remember the day when we were visiting Jeremy’s family in Florida and I was able to let the older boys outside into the fenced backyard, where they would dig for hours in the sand in plain sight of the kitchen sink or family room sofa. Or the day when I watched the boys play outside in the six grassy acres at my parents’ house in Kentucky while I sat out on the carport on a chair, and realized that I was actually relaxed, which I never feel at home; there I feel that, whenever we go outside, the eyes of everyone in the cul-de-sac are trained on my kids and whatever they are doing (or not doing.) In Kentucky, there is only one neighbor that has a view of my parents’  house, and it belongs to my aunt. The rest of the surrounding land is all cornfields (or soybean or wheat fields, depending on the year and season.) 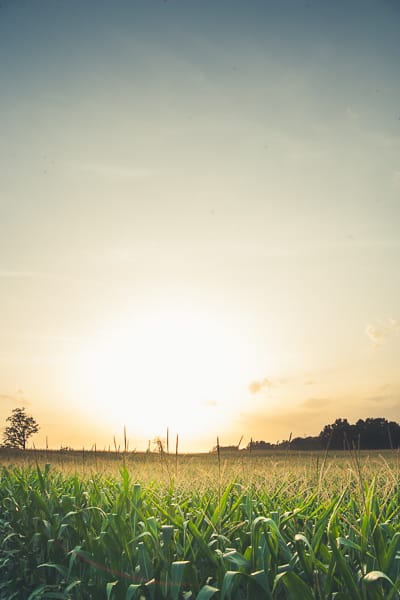 While we still said we would go just about anywhere, so long as we were close to family, Kentucky was really the place that began to pull at our hearts. There is something about the expanse of the sky and the gentle roll of the hills, and the way everything is exposed and not hidden by buildings and businesses or city lights. Every time we visited, we hated having to leave and come back home.

The desire, for me, was the worst kind of roller coaster. To be so united in vision with Jeremy, aligned toward a particular goal, but one that was essentially out of our reach, that we were powerless to actually bring to fruition. It was a real source of bitterness for me that I had to constantly fight. Then, when I was pregnant with Anselm, I felt like I heard the admonition to just wait until he was born. “After Anselm,” it said. So I tried to content myself with frequent visits up to the farm, sometimes on holidays, sometimes just because. And we waited.

And last year–a year ago to the day–an opportunity finally was presented.

popsicles on the front porch

Two opportunities, actually–both in the form of internet-based jobs, for which we can be anywhere.

Which means you’ve interpreted all of those past-tense verbs correctly: we are moving.

The past year has been one of pins and needles, with lots of if’s and hopefully‘s and let’s see’s and the attempt to keep things as quiet as possible until all of the proper authorities at Jeremy’s current job had been properly notified.

And they have, and it’s official. And we are so excited we can hardly stand it.

I mentioned before that I grew up here. It was a homeschooler’s paradise; lots of room to run and explore when the schoolwork was finished. We had sheep, chickens, horses, three or four bottle calves, a plethora of dogs and more cats than you could shake a stick at. What livestock we may bring to the farm is still a subject for debate, but we’re discussing bees and rabbits. Maybe chickens, if I can get over my disdain for them. (I really didn’t like the chickens.)

As a kid, my imagination ran wild out here. It still kind of does, actually. I always take a lot of pictures when we’re up there. It’s a creative’s dream world.

my cousin Brittany in the western field; last summer after making floral crowns from the wildflowers.

The house is a humble mid-century brick ranch; it has three bedrooms, one bath, and around 1350 square feet with a full (unfinished) basement that is the same size. We have big plans for this house, though I have already been through one DIY renovation and I know that those plans are going to take a while to come about. I’m ok with that, though–I’ve already started some temporary updates and I’m sure there will be many more this year.

My parents have been gracious enough to give us the house and begin renovating the ham house into a one-bedroom apartment for themselves. I am so, so excited to be not only close to family, but literally within walking distance. It’s better than I could have hoped.

Last year, when the plans began to be set in motion, I secretly named the property “Janderhil” (read: yawn-der-hill) because I am an old soul and I believe in naming things. The name is a kind of play on words, sounding like “yonder hill” (if you’re not familiar with the term: “yonder” means, essentially, “that one over there”. The house sits on a bit of a hill.) Then, additionally, the name can be read as “Jan-der-hill”, Jan like “John”, which is my dad’s first name–so, “John-of-the-hill.”

Yes, I put a lot of thought into these things, and yes, that’s why I kept it to myself for almost a whole year before finally telling anyone. Fortunately for my pride, my family loved the name as much as I did. (And Jeremy asked me if there were any other genius ideas I was sitting on out of fear.)

When is all this happening? A matter of months, according to plan. It’s my goal to cover as much of the process as I possibly can–especially now that I’m allowed talk about it!