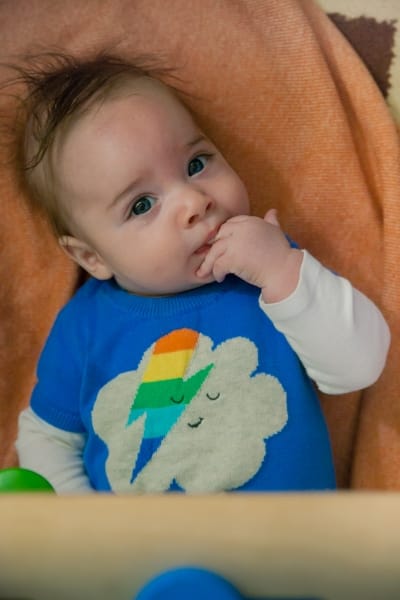 I must apologize to my little son, for assuming his personality from his antics in utero. Eldore Rex, The Fire-Thunder King, is actually fairly mild-mannered. He is sociable and personable; he smiles at everyone: his brothers, the pediatrician, the random person in the checkout line. He will fuss, sometimes, if he is ready for conversation but there is no one there to oblige him. Occasionally he will settle for talking to his hands instead, but not too often. 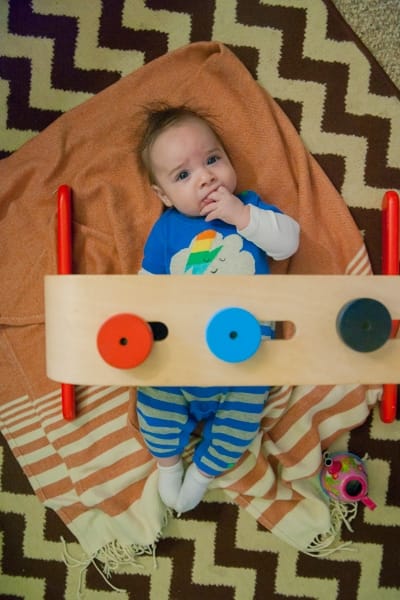 Indeed there are few situations where just the attention of some person (it doesn’t really matter who) will improve his mood immediately. If said person is willing also to listen to him complain about the situation, well, so much the better. He didn’t even cry for his last round of vaccinations. He only looked at me with an increasingly bemused expression (he is very good at that) and then complained a bit. As I am a willing listener, the moment passed quickly, and he was quickly back to his affable self. 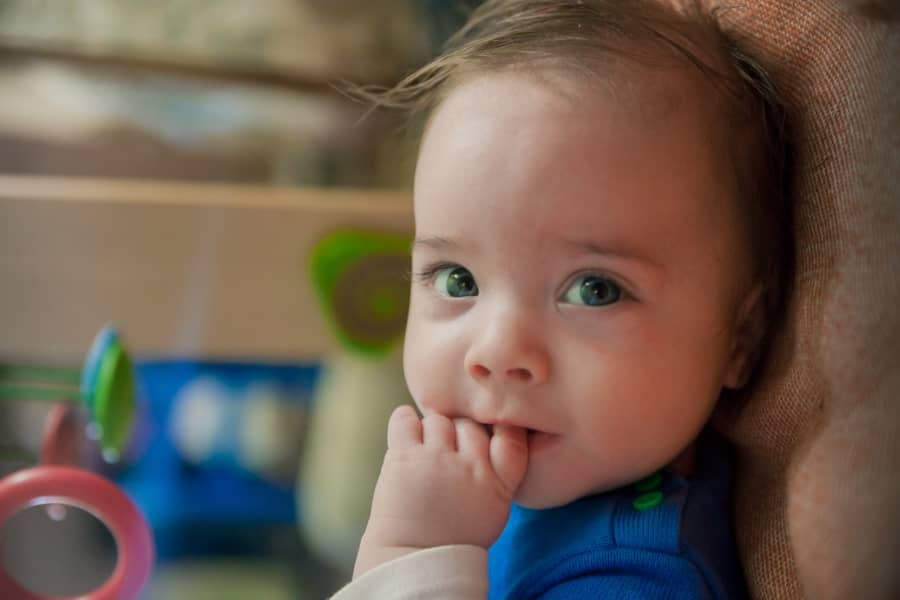 When he smiles, he draws up and clenches his fists and wobbles his head back and forth. He is an expert at what I call the “Happy Snuffles”, a quick series of excited inhaling and exhaling, which is sometimes punctuated by an exuberant hoo! or perhaps hoo-OH!, the meaning of which I am not quite clear on yet.

He spends much of his time playing with his gym from IKEA, which has been a favorite toy of every child of ours. His very favorite is the ring, which he hardly ever misses. Sometimes, though, he aims a methodical swipe at one of the dangling toys but misjudges the distance. When this happens, he continues, without pausing, the arc of the swipe until he brings his hand into his mouth and chews on it thoughtfully, as if that is what he meant to do all along.

His eyes are still blue. His wild, wild hair is beginning to fall out, though, and little tiny hairs are sprouting up all over his head to compensate for the loss. What hair is left from that which he had at birth is (I feel) ridiculously long, and I did have to cut it over his ears last week as it was beginning to bother me. The poof of hair on top is starting to look rather like an unfortunate comb-over. The hair coming in is dark. That’s hardly surprising, though, is it?

His daytime sleep is very good. He sleeps much longer now that I don’t rock him at all before his naps. I put him in his bassinet with his “mys” (blankies) and his pacifier and he goes to sleep. His nighttime sleep is every bit as bad as Anselm’s was at this age, but this is (perhaps) because I finally wised up after five kids and have waited to do any night training until after the four-month-sleep-regression, for the good of my own sanity. So in a couple of weeks we’ll start that–again, for the good of my own sanity.