The baby gear industry is a huge and profitable one, especially for first-time parents who have no idea what to expect.  But my father’s eldest brother came a month earlier than expected, and my grandmother used to love to tell me that all they had for him was ten diapers and a couple of shirts, and they pulled out a dresser drawer for him to sleep in. Somehow he turned out alright.

The more children we’ve had, the more I’ve found myself becoming a baby stuff minimalist. We bought a swing with Ephraim (which I never turned on) and sold it when I was pregnant with Clive. By the time Elvie and Eldore came along, I wasn’t even using our bouncy seats or baby bath. I’ve never had an exersaucer or jumparoo, and even my trusty Johnny-Jump-Up wasn’t useful for all the kids. We survived! The truth about all this baby stuff is that if you have it, you’ll use it. It may make things easier for you. There’s no reason not to buy any of it if you have the money and space and don’t mind the baby-stuff aesthetic. You will always find someone who has a particular piece of baby gear and will swear they couldn’t live without it.

Conversely, there is no reason you have you buy any of it, either. If you (like me) can’t stand brightly colored plastic, blinking lights, and electric music, or if you’re in a small space and just don’t have room for a swing or a baby bath, then guess what? You can do perfectly fine without it. You will find a way around it. I promise.

You could probably find a way around the stuff on my list, too. This is my personal list of things I don’t care to do without–my “must-haves”–items that have been used from child to child without fail (or that I had later and sincerely wished I had had with my first few children.)

Our last house was two story, and I always set up a “baby” station on the lower level so that I wasn’t running upstairs to put the baby down or change diapers or whatnot. With my first three, that baby station included a pack-n-play. Now, there’s nothing wrong with a pack-n-play, but they’re big. And they’re ugly. And they’re really way too much room for a tiny baby who’s swaddled and won’t be budging while he’s lying in it.

When I was pregnant with Elvie, I realized I was fed up with having to find a place for that big mesh and polyester rectangle. I decided to get a Moses basket and stand instead. How I wish I had done this sooner! It was so much nicer to look at, and much more convenient than the pack-n-play as I could easily move it from room to room or even outside if I wanted to. 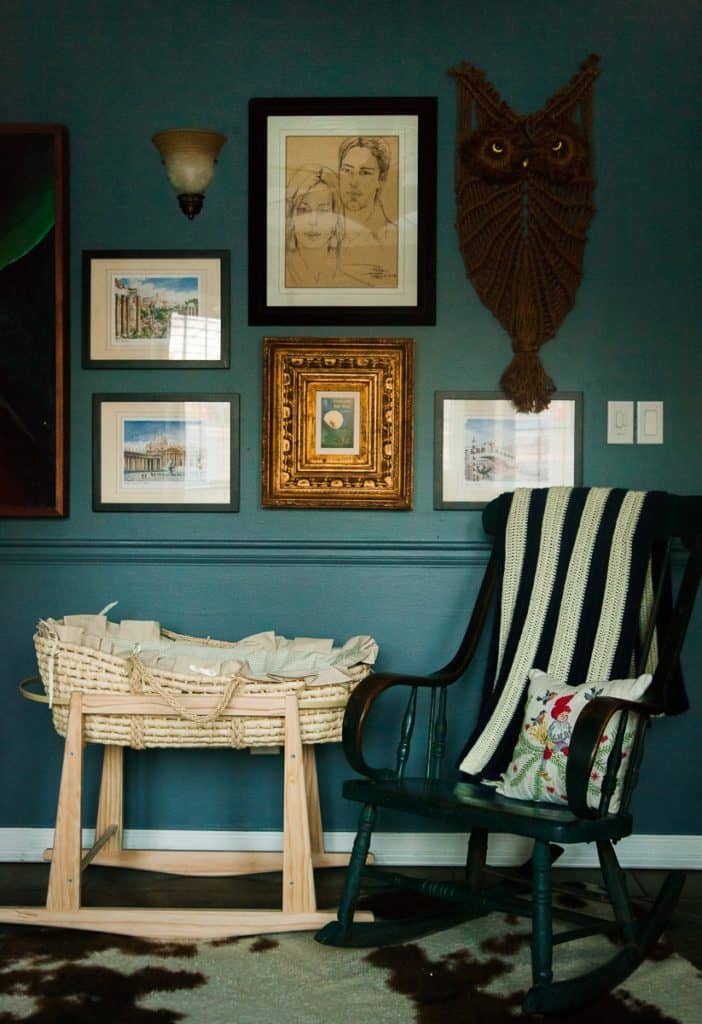 The Moses Basket in our Georgia house. That was a nice little spot. 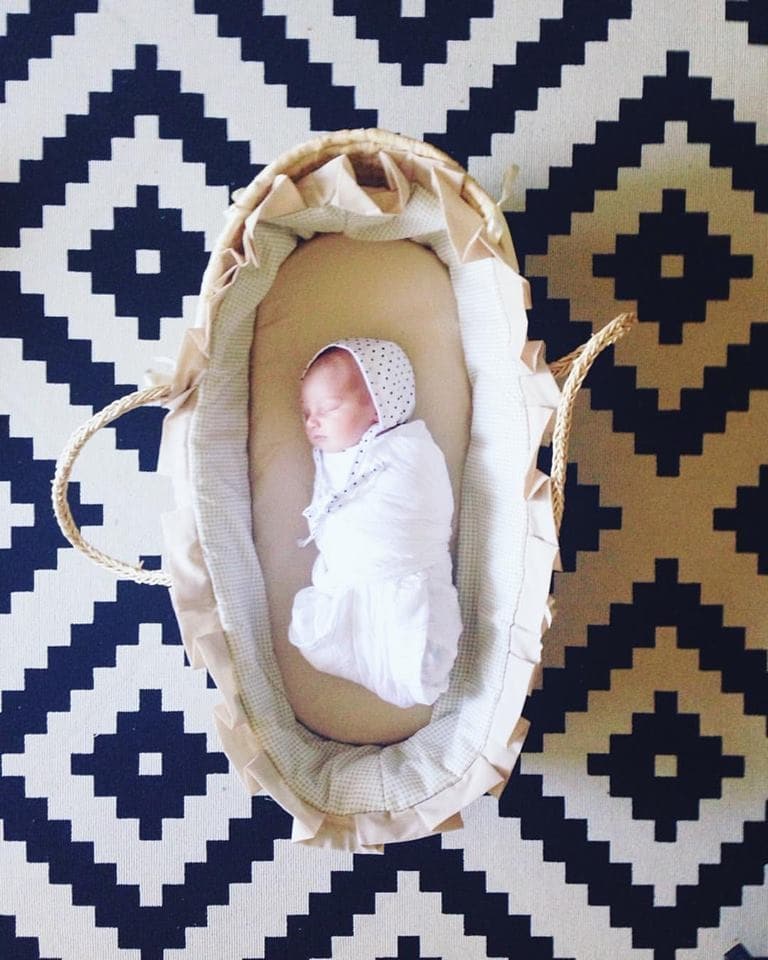 newborn Elvie in the basket

With Eldore, the Moses basket came in very handy as we go frequently between our house and the Ham House to hang out or eat. It was simple to just pick up the basket and walk from house to house. I could have used it in place of a bassinet, too (which I already had) which is why it’s on this list and a bassinet is not.

While not in use for an infant, the basket could double as toy storage or (as it is currently) be lent for another baby to use in the interim. And if you’ve got curious toddlers or pets in the house, you’ll probably want a stand to put the basket on, to keep baby mostly out of reach.

Eldore in the Moses Basket at three months. Note that I have an old swaddle blanket as a “sheet”.

I swaddle the babies until they’re between two and three months old, but I use the blankets beyond that for nursing covers, or emergency mattress or mattress covers, or burp cloths when I shop on Eva Online. I was gifted with some muslin swaddle blankets when I was pregnant with Clive, and they were so much easier to use than the flannel ones I had with Ephraim. I have used them in place of any velcro or zip-up swaddlers which, while probably very good, don’t have much of a purpose beyond swaddling.

I bought some bamboo swaddle blankets for Eldore, but found that while they’re so much softer and more cuddly than cotton muslin, they’re slippery and I had trouble getting them to stay wrapped up properly. So I’m staunchly in the cotton camp.

I’ll note, when I had a baby that was exceptionally good at breaking out of the swaddle, I would wrap him or her in two blankets, and that usually did the trick.

Lots of people get by without any pacifiers at all, but I like to use them (and from day one) and they’re not something I’m willing to go without. We’ve used Avent pacifiers (The regular ones, not the Soothie kind!) with all five babies with great success, and have not had any nipple confusion or trouble getting them to take them. I haven’t had to bother with any other brands of pacifiers.

Anselm in the Moby. I wish I had had a ring sling earlier.

Since my kids are now old enough (and with my husband working at home) that I don’t have to cart everyone along with me when I go somewhere, this particular item isn’t quite as necessary as it would have been a couple of kids ago. When shopping with my children, I usually relied on wearing the baby in a carrier (usually my moby, sometimes my Baby Bjorn-knockoff.) With Eldore, I finally got fed up with having to wrap all that jersey into a sensible harness or having to deal with tons of plastic clips. I made myself a ring sling, and my world changed.

The main thing I love about a ring sling is that it is fast to put on. Just a matter of putting it over my shoulder. Even after years of using a Moby wrap, it still took me a while to put the thing on and then get the baby in, and it always dragged on the floor in the process, which meant if I was outdoors and it was raining, the ends of the wrap would be wet.

I made my sling out of homespun cotton and rings from Amazon. It took less than an hour and about $18 to make.

A place to change a diaper without hunching over

This one is a little open-ended. I made the mistake with Eldore of trying to change his diaper in the Moses basket–that was a mistake. It wasn’t tall enough for me to change him without bending over in a way that really hurt my back and my sore abdominal muscles. After days of this, I was in significant pain.

A lot of people will say you can get by perfectly well without a changing table and I happen to agree with them–so long as you’re not trying to get by with changing the baby someplace that’s going to cause you pain. Get a changing table, or clear off a dresser, or use a bed that’s tall enough for you to stand straight, or put a changing pad on a bathroom counter or whatever. For Ephraim and Clive, I had a real changing table (with a clothes hamper in it, which was really convenient.) For Anselm, Elvie, and Eldore, I’ve had a dresser with a sheepskin on it for a changing table. I can also use our bed, which is really quite tall.

That’s it! Would you believe it? These five things are the ones I make sure I have ready for the new baby (besides the car seat, clothes, and diapers.) With so many people in a rather small space, I have to be very careful about what I bring in. Our newest–Number Six–is due in April, and this is all the gear I’m gathering for him or her. It’s not much, but it’s more than a dresser drawer!