All day I kept writing “three months”. On my daily whatchamacallit (that daily list I make of to-dos and meals and what the weather will be like…I have no word for it) I wrote that she turned three months today. Then I had to cross it out and write five months instead. Just now I tried to type three months instead of five, again. Clearly I am losing my mind.

A major discussion this month has been over her nickname. We have planned on calling her Elvie Kate for forever, but something about that final T just gets to me. I think I’ve all but decided to switch to Elvie Kay instead. Kay is what my grandmother (the Kathryn in Elvie’s name) used to go by, so it carries more weight than Kate does. Oh wow, was this month a doozy for sleep. The fourth month always is, for absolutely every baby except Clive (that I can remember.) Both Ephraim and Anselm had huge regressions at four months and Elvie Kay very happily (or unhappily) followed suit. This month we worked on dropping the pacifier for naps so we could (hopefully) get over those forty-five minute naps she’s been having.

This is kind of a no-brainer for me by this point. All of my kiddos have used a pacifier as newborns, all of them reached a point in infancy where the pacifier was more of a hinderance than a help, and all of them have gone through a very short training period in which they dropped the pacifier and learned to suck their thumbs (or first two fingers, in Clive’s case.) But oh no, not Elvie Kay. We dropped the pacifier and she refused, refused to suck a finger or a thumb or a fist or anything, even though she did occasionally deign to suck on the knuckle of her index finger sometimes, or on the edge of her blankie at other times. And what began as a “I’ve done this three times before and it’ll only take a day or two” to essentially three weeks of “What is going on here?” Nights were no trouble as we didn’t use a pacifier then, anyway, but naps were tough there for a while. She didn’t cry every time, but was super unpredictable. In the end she never did take to a thumb or finger, but she does love to bury her face in her blankie. She just falls asleep on her own. I guess she thinks until she falls asleep…? (I should lend her my kindle and she could fall asleep reading Chesterton like I do. Maybe that would have been more efficient.) At any rate, we seem to be over the regression and everyone is the happier for it. (And really, I’m glad I don’t have to deal with thumb-sucking with this one. I still don’t know how I’ll get Anselm to stop.) 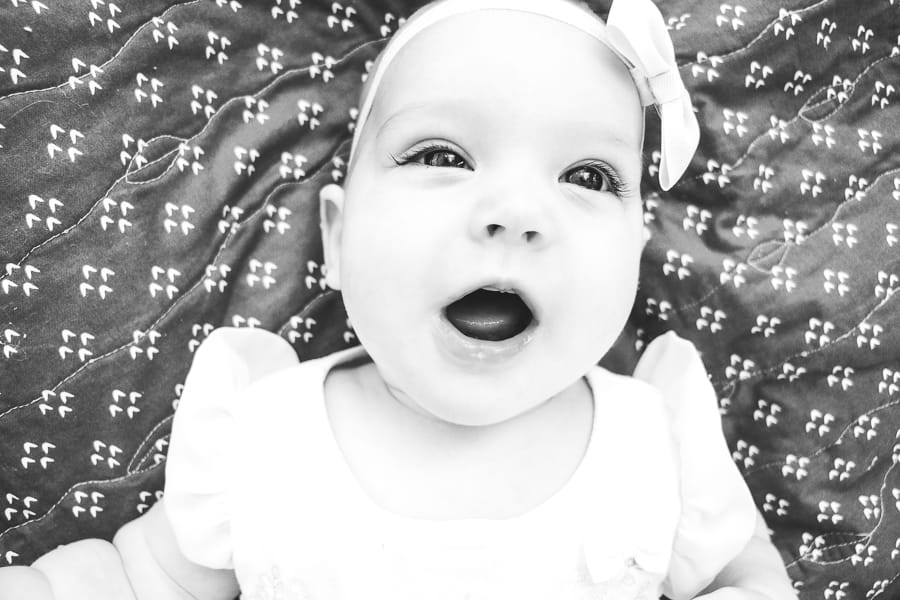 In the night, she sleeps anywhere from 9-11 hours straight. Unfortunately that means she wakes up and wants to eat about 1-3 hours before her established wake-up. Blah. I’ve tried doing a dreamfeed to try and coax her into skipping that early morning feed, but no luck. Oh well, we’ll work on it this month. I had the same trouble with Ephraim at this age.

She wins the award for beating her brothers in the rolling game. This girl rolls belly to back like a champ and has just begun rolling back to belly. In contrast, I had to bribe Ephraim to roll back to belly at around 8-9 months because he just wouldn’t do it. (I used mashed bananas, if you’re wondering.) She also scoots sideways and backwards and a little bit forwards, and this month I found her in her crib on her elbows and knees. She is a girlie in a hurry, and the polar opposite of both Clive and Anselm, who weren’t scooting anywhere even on their first birthdays.

She doesn’t talk as much as before, but she does make a variety of growly-noises and talky-sounds, with mmm being the most recently added to her repertoire. She also has quite the sense of humor and finds Anselm especially hilarious. She really loves to talk to people, and particularly loves to watch the boys, who, in turn, love to act out and be silly so she will laugh at them.

She’s a very happy baby. Really I think she is quite flexible in terms of her sleep habits and demeanor. Clive (I always compare to Clive as he was NOT FLEXIBLE in the slightest) would go to pieces if we missed a nap by so much as a few minutes. Elvie is not like that, thank goodness, because she is Number Four and good heavens I haven’t the energy to fuss over her as much as I could with Clivey.

She is big. I’m not sure how much she weighs, but as I type she’s in a 12-18 month romper from Old Navy and, while it’s a little roomy and a tad long in the legs, she’s otherwise doing just peachy in it. She and Anselm can wear the same size diaper. I’m a little worried for him once she gets big enough to throw her weight around a little. Of course, he’s had his own growth spurts recently, but it’s been up, not all around.

And yes yes yes, that hair still has a slight reddish touch to it, and yes I’m still crossing my fingers, but no it isn’t quite as red as these pictures make it seem.

The King of Pickles
a flatlay and the truth behind it