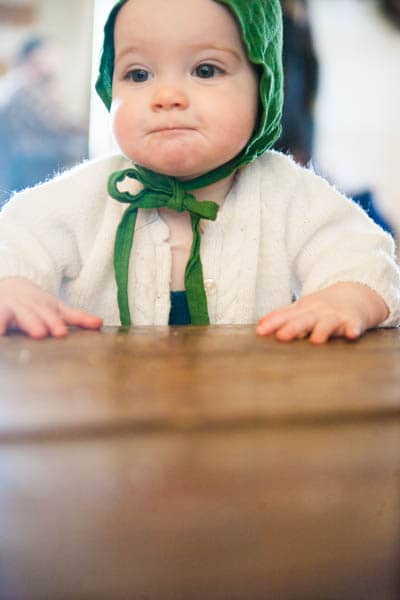 She is busy, busy, busy, ever so busy, only stopping to sleep, really. If she’s up she’s moving, whether it’s standing up and rocking or dragging herself along in her galumphing sort of way, or pausing to turn a toy over and over in her hands while she sings to it, da-da-da-da-da-DA! Even while sitting in her high chair to eat, her feet kick and her little right hand rolls around and around.

Pictures are difficult with a such a busy little bee. Combine that with the fact that she doesn’t care for any of the toys that I choose for her to look at…well, that’s why she doesn’t get many pictures taken these days.

She’s started cruising, just a little bit. She’s getting braver as each day passes. Today she went from the sofa to the coffee table, which is a span of about two feet. She did it once but then got discouraged after I moved her back and tried to film her doing it; she would not attempt it again. 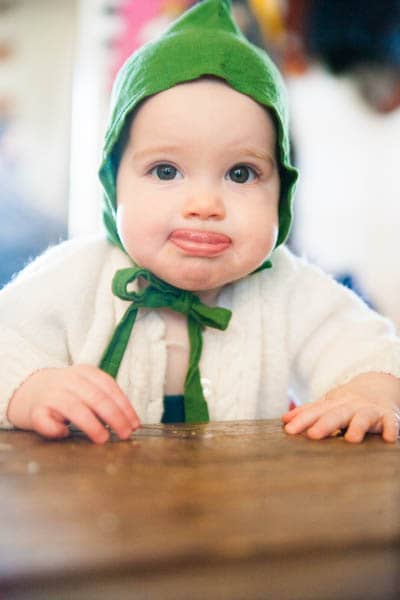 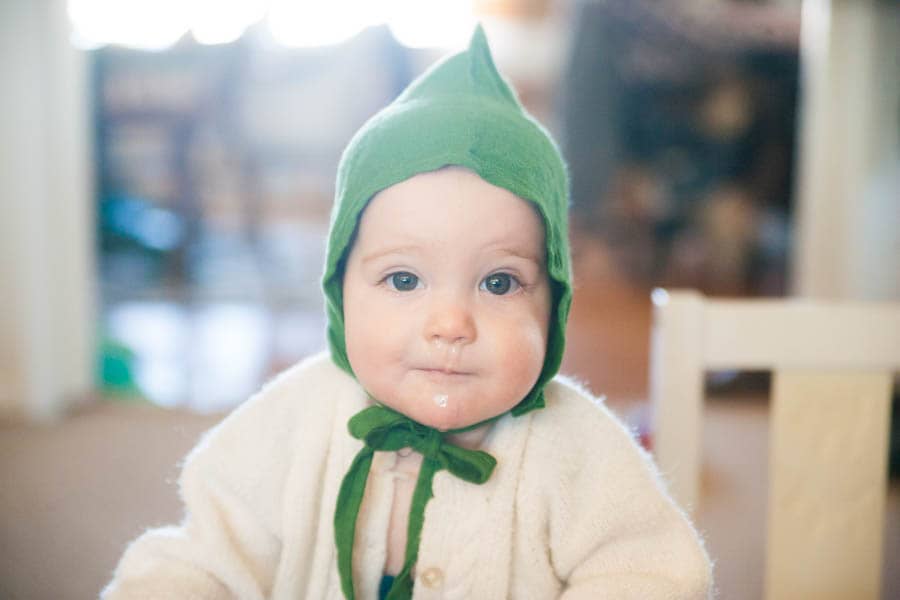 She still has no teeth, bless her heart, but that doesn’t stop her from eating just about anything. Elvie Kay is big on flavors, real flavors; she won’t eat bland baby food, so don’t try to give it to her. Her favorites are tomato sauce and twice-baked potatoes, fajitas and white chicken chili. She eats a big bowl of Cream of Wheat every morning, and sister don’t you drag your feet bringing it or you’ll get an earful.

She’s sure got the drama and attitude going, but after six, four, and almost three years of Ephraim, Clive and Anselm, respectively, I’m not surprised. Ephraim especially could really throw a tantrum, and Clive was known for his Energizer Bunny fits that kept going and going and going. Elvie Kay can screech with the best of them, stopping you in your tracks from whatever you’re doing that you shouldn’t have been doing in the first place so you can pay attention to her. There! Now don’t you feel better now that you’re looking at her?

She can throw the switch on a fit like nothing else. Just ask the checkout guy named Juan that she stopped mid-wail to grin at once she caught sight of him. Sweetest thing you ever saw. Who, her, having a hissy fit? Must have been that baby two aisles over.

Her hair has stayed stubbornly short and fuzzy all over her head, but the hair at the back is growing, growing so that I could braid it if I want to. I have always said that nay girl baby we had would be bald until she was two, just because the boys grew such thick heads of hair so quickly. And so I was right, mostly–she’s not bald–it’s just funny how these things end up. At any rate, thankfully she’s quite good about wearing bows and wraps on her head. I haven’t had to correct anyone about her gender–that has been a welcome change!

Those eyes, though! They are as enigmatic as ever. Not taking after anyone in the family. Not blue, not grey anymore. Not brown. Not really green. And dark–they are deep blue on the outside and a tiny bit of amber in the middle. Any person, when asked, will give a different answer as to what color he thinks they are, and some people will give different answers in the span of a day. I suppose she has magical, color-changing eyes, like a Mary Sue in a fanfiction, which I hope doesn’t give her any ideas.

She’s bossy. Now, I know you’re not supposed to say that about little girls–you’re supposed to say they’re strong-willed leader-types–but no. Elvie Kay is bossy. Just last night Mama was making dinner, flipping pancakes while holding Elvie Kay on one hip. And the boys were supposed to be cleaning up, and Mo was dragging his feet, as usual. And so Mama told him: Clean. Up.

And as high-and-mighty as you please, Elvie Kay echoed: KEEN. UP.

Then she looked at Mama all sideways, Don’t worry Mom, you make the pancakes and I’ll keep him in line.

She fits right into the family, a little puzzle piece we never really knew we were missing. The boys fawn over her and she eats it up; she’ll drop Mama in a hot minute to go play with Her Boys. She loves Daddy and really lights up when Grandfather comes over. She’s a doll in the Nursery and puts on her best charming face for strangers. She’s a real little lady–if a bit Scarlett O’Hara–but it’s OK, we’re only eleven months in. We’ve got time to tame that drama.

words upon words for 2017
adventure