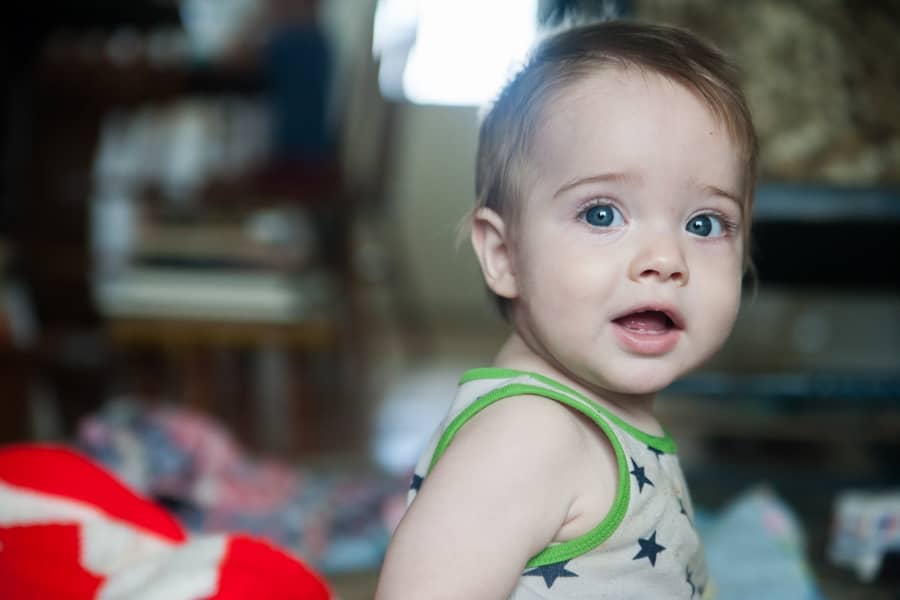 Two things of note have arrived this month–well, three, really. The first (two) would be his two bottom teeth, which pushed themselves through amid much grumbling, whining, refusing to nurse, and general difficulty. In fact, Eldore is the first of the five Krans children to make such a fuss over nothing more than two bottom teeth. All the others didn’t think it an ordeal worth complaining about.

But Eldore would wheedle and whine and cry for me and wrangle his washcloth from me while I was trying to bathe him so that he could suck and chew on it (and then shriek when I took it from him.) Finally, those two offending pieces of enamel-covered dentin poked through his gums. And just when I was breathing a sigh of relief for the end of our first encounter with teething, he began to bite while nursing. The other sudden appearance was a curious squeaking sound he makes when he’s supremely interested and amused by something. He sounds like a chihuahua barking, actually. He will turn a toy around and around in his hands, yipping at it (Ah…ah…ah!). None of the children have made this sound. It is uniquely Eldore, and it’s really very endearing, except in the middle of the night when he sometimes wakes and talks to himself a bit before going back to sleep (he doesn’t want to nurse at night anymore). Those little barks are somewhat startling to wake up to. 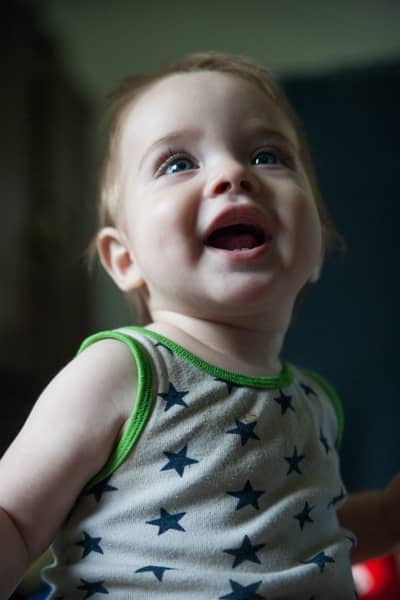 He does very well sitting on his own and will roll all around and scooch backward while trying to get his little wrinkly knees up underneath himself. He does an excellent baby push-up, but so far his attempts to get on all fours only serve to push him further from whatever object he hopes to get at, and (sometimes) manage to get him stuck under a chair. But he keeps trying–most of the time, I will sit him down on his backside only to turn around a second later and see him reaching, twisted and rolling, for something just out of his reach that is clearly much better than whatever toy I have given him. He will deign to play with the box of blocks I usually set before him, but only to dump them all out (and he doesn’t help clean up.) But then again, what kings help cleaning up?

He’s the first Krans baby to wean himself from the pacifier without weaning himself into thumb or finger-sucking. I don’t really know how he soothes himself to sleep. Perhaps by dreaming up laws to impose upon his subjects–I mean siblings. I don’t watch him fall asleep (he probably wouldn’t if I did) so this particular habit of his is a mystery to me. I am glad, though, for one baby that I won’t have to take a thumb or paci away from in the future. I wish I knew how this all came about so that I could duplicate it with any further children. However, like barking, it just seems to be one of Eldore’s little quirks.

Along with his mysterious self-soothing method, he has begun officially sleeping twelve hours at night (though he does, as previously mentioned, sometimes wake to talk to himself a bit before going back to sleep, but he doesn’t cry. Oh no. He saves all of his crying for the daytime when Mama walks past and doesn’t pick him up, despite his best dimpled smile and happy-flappy arms. No one ignores The King!)

making a floorplan for the colloquium: the kitchen (part two)
How to vault a ceiling in a 1960s Ranch Home: A Visual Journey