Elvie Kay turned eight months on the third of November. 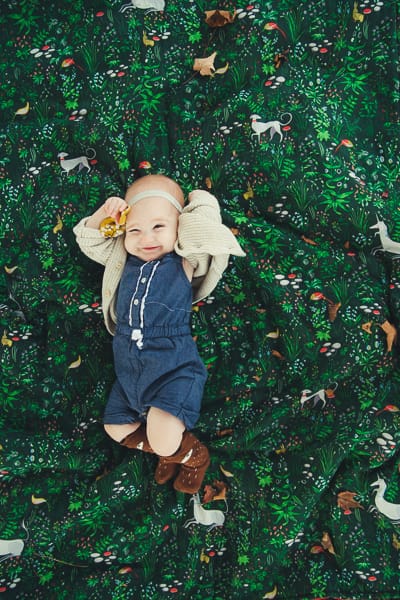 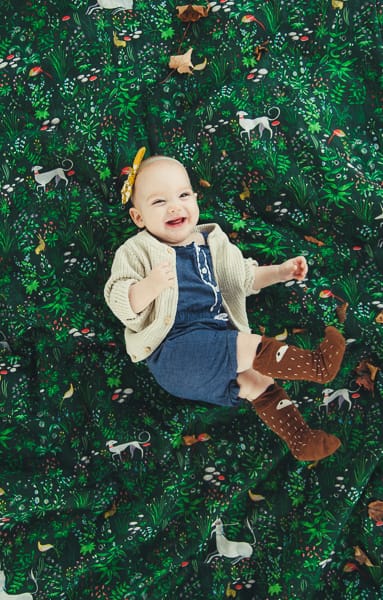 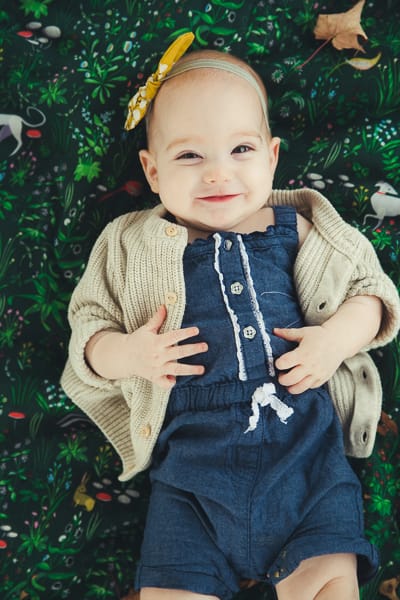 She is a busy busy scooter, and I cannot get her to sit up. Every time I sit her up, she rolls over and dashes off to go look at something. She does occasionally stop and push herself back into a half-sitting position, but usually she just keeps on scooting, scooting, scooting. She pushes herself with one foot and uses the opposite arm to pull herself at the same time. She’s very fast and very quiet while she does this. It inspires many games of Where’s The Baby, since she can vanish in a blink if you leave the room for any length of time, however short.

Despite this method of getting around, she has been rocking on her hands and knees for a little over two months now. I really thought she would be up crawling on her knees by now, but she will get up and rock, rock, rock, then splat onto her belly and scoot off.

She’s started waving, will mimic the sounds you make if she’s in the mood, and has made peace with the church nursery, provided you set her down with a toy instead of handing her over to a nursery volunteer. She likes to make smiley scrunchy-faces at new people, but from a safe and respectable distance, of course.

She is utterly enamored with her big brothers. She especially likes Ephraim–probably because he talks to her the most. She thinks Anselm is hilarious (and he tries very hard to be hilarious.) Clive is best for kisses–he is the loving one.

She will not sleep in the car or on errands anymore. It’s made errand day sort of…interesting. Last week we were driving in the car when she, tired and in desperate need of a nap, decided not to go to sleep, but to cry instead.

Ephraim was very concerned, and said in a soothing voice, “Elvie, it’s okay, Honey, we are going to be home soon. Oh, are you tired? We’re almost done, it’s okay, don’t cry.”

But Anselm threw his head back and hollered, exasperated, at the ceiling of the van: “OHVIE! ‘TOPY CWYYYYYIIIIING BE QUIIIET!”

(Which, if you’re not fluent in Moisms, means “Elvie, stop crying and be quiet, please.” Well, he didn’t say please but I’m sure he just forgot.)

She’s generally rejected baby food in order to share the real food that everyone else eats–she’s not a fan of that bland, blended stuff. So far her very favorite has been chili. I worried about it upsetting her tummy, but nope. She just about lunged out of the high chair for it–she can be very emphatic about her preferences.

She continues to be incredibly flexible in the sleep department, but it occurred to me as she wiggled and twisted and blabbered in church one Sunday that I ought to make it a point to get her to fall asleep on me at home every now and then. She’s so alert and engaged and  curious that she considers it an affront to her pride if you try to get her to sleep while so much excitement is going on.

She is awfully silly.

She does this funny thing when she’s excited where she grabs her blankie in her mouth like a little puppy. I think this is partly out of her uncontrollable excitement at whatever is happening at the moment and partly because she knows it’s hilarious.