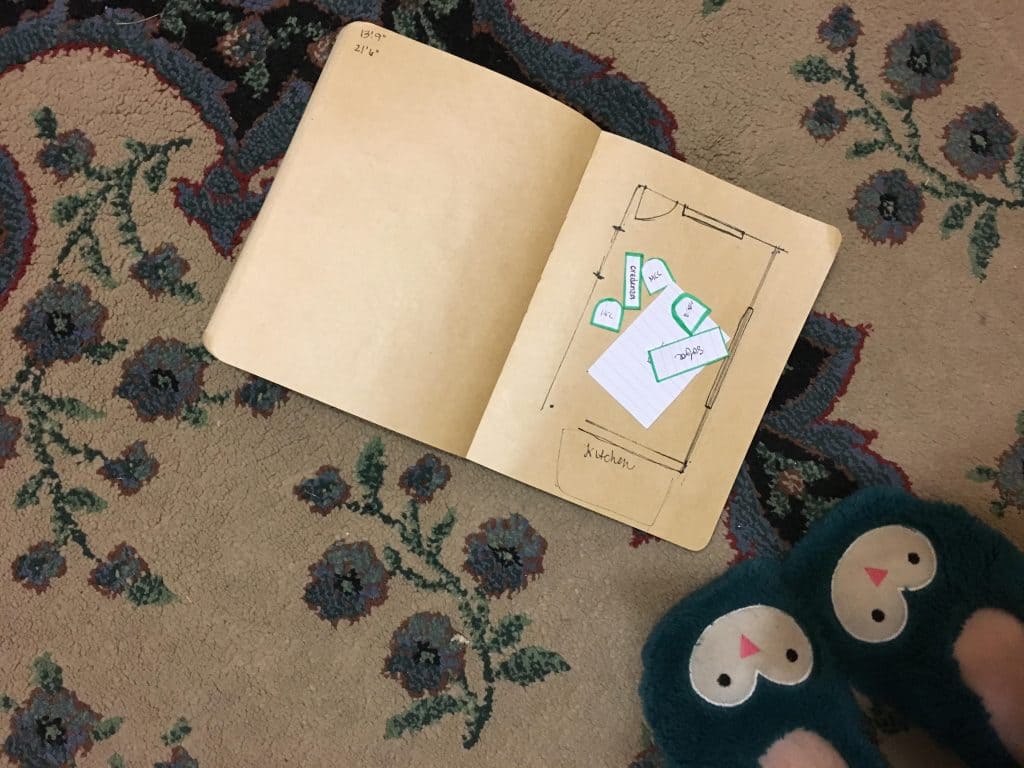 I shared an update on our house a few days ago, so naturally, that meant it was time to switch things around.

No really, the actual story is that we got a desk for Jeremy to work at, and it’s been put in the room that was the living room. So we decided to switch the dining table into that room and the couch back into what I will call the fireplace room. Then after I moved all the furniture, we dropped everything and rushed our second son to the ER, where his symptoms disappeared as soon as we arrived. (He’s fine, by the way.)

So this morning it’s slightly warm but grey and dreary outdoors, and I am sitting near the fire and looking at a room of chaos. And I’m hoping to get things squared away in here relatively quickly and with only a few pots of coffee. I took these photos in said room of chaos, by the way–I promise it does not normally look like this! 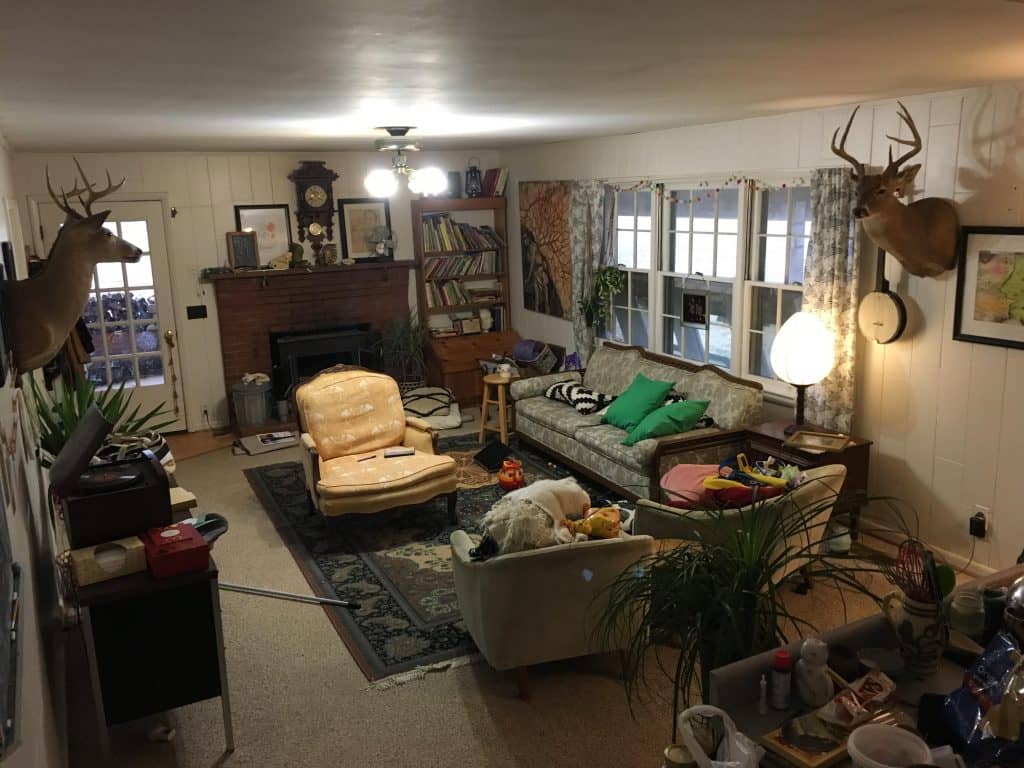 Here’s the thing that’s making the process difficult: this room is a pain. It’s always been a pain. It’s been a pain since my family moved into it thirty years ago. Its proximity to the kitchen makes it a better dining room than living room, and the presence of the fireplace makes it a better family room than dining room. So we were never exactly sure which it worked better as, and we swapped it back and forth a number of times while I was growing up. It’s also long and narrow, a feature which is the bane of furniture arrangers everywhere.

But the biggest wrench that this room throws into any layout is this: The door we use as a primary entrance to the house–and the primary walkway to get from one end of the house to the other–is in this room. It’s one big long corridor in the house, and it makes what is already a very narrow space even narrower. So, although the room measures approx. 22′ x 14′, when you take that walkway into account it’s really more like 22′ x 10′.

This photo was taken from the entrance to the kitchen. It’s a straight shot through the hallway directly to that door; that is the main thoroughfare of traffic in the house. No twists, no turns. 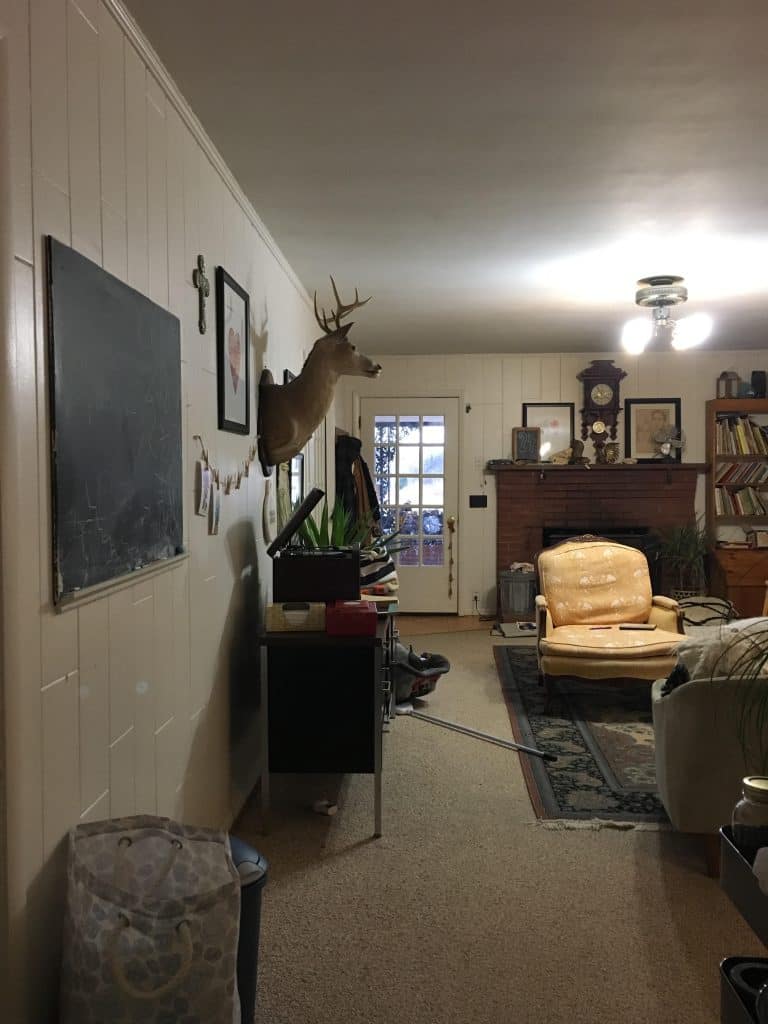 And here it is from the opposite direction.

I know exactly what I would do with this room if that door and walkway were not there. Then the fireplace would be centered, and the furniture could spread out a little more without blocking anything or anybody. I know what I would do if the room was actually 14′ wide. But since we use that door…it leaves the whole room off balance. It’s a pet peeve of mine to have to walk between conversing people or (or in between the television and its viewers) to get from one place to another in a room, so I don’t really want to place furniture that’s going to interrupt that flow of traffic.

So I created a super sophisticated mock-up to see if I can figure out how to layout the furniture in this room without it feeling cramped, cut off, or (as can happen with a long narrow room) too spread out.

This is sort of what I thought I would do when I first switched the rooms. Of course, putting the gold chair in the corner by the fireplace (in the lower left corner) would mean I’d have to move that big wooden toybox/bookcase. This layout looked great on the paper but too spread out in real life–and everything was so far away from the fireplace. It didn’t really feel cozy.

This was another idea, but it had the same problems as the previous layout, plus the chairs sticking out past the sofa is kind of awkward. And I’d still have to move that bookcase–but where?

Ok, so maybe it would be better to split the space? Putting the pair of green chairs close to the fireplace again, as they were when the table was in this room, then creating a second seating area at the back of the space, closer to the kitchen.

Or maybe using the sofa to divide the room in half? Now maybe we are getting somewhere…

The possibilities are (almost) endless. If only that sofa wasn’t so heavy to move around I’d probably try them all!

I’m open to suggestions from people who’ve dealt with a long narrow living room! What ended up working for you?