Everyone has their own list of the pros and cons of having two children close together. Our Remy will be eighteen months old when his brother Clive is born. Unless I have to be induced early like I was before–then they’ll be seventeen months apart. This, is of course, assuming I go full-term. Anyway.

After a near-death experience in the delivery room, you’d think I wouldn’t be too eager to start the process again so soon, but I was. My doctor told me to wait six months before getting pregnant again. I waited nine. I think I deserve something for that. Like an extra ultrasound, or something.

Maybe my OB isn’t willing to hand out any prizes, but I thank my lucky stars that I have a husband who is willing to indulge the crazy pregnant lady with one million Pinterest nursery ideas up her sleeves.

When we first decided that our “two under two” would be sharing a room, my mind immediately went to furniture. It seemed a shame to buy a second crib when Remy wouldn’t be in it too long after Clive was born. We have a twin bed already, so after googling mommy forums for “transitioning a toddler to a twin bed” and finding that lots of people actually do that, we decided that we could just move Remy to the twin bed when he was too big for the crib.

I think this plan was in place for about two or three weeks before it started keeping me up at night.

So I started scouring craigslist for cribs. I wished I could find one like we already had, because I really wanted the furniture to match, but Remy’s crib is a big, beautiful thing that sadly is no longer produced and sold. It wasn’t ever very popular, either, seeing as I couldn’t seem to find one secondhand anywhere in the south. (Either that or it is enormously too popular and no one is willing to let theirs go.) I did think my problems were solved when I found a listing for two Jenny Lind cribs, mattresses included, for $150, but they were actually sold the day before I emailed the seller. (Which, I’ll admit, I seriously doubted after the listing didn’t come down for another two weeks, although I wasn’t nearly enough of a crazy pregnant lady to email the seller again and double check. Nope, not me.)

After I got over my depression from missing the matching vintage cribs, we discussed the situation again and decided that we would buy a toddler bed for Remy, then just keep the new baby with us until Remy was ready to make the transition. I found a great bed and mattress on craigslist that almost matched our existing crib, and that was that. Until we set it up in the new nursery we’re preparing for the boys, and I saw how much Remy really, really liked climbing in and out of the bed. And trying to stand up and jump on it. And when I wouldn’t let him stand up, how much he really, really liked holding onto the side and bouncing on his knees. Oh, he liked to lie down on it, too. Sometimes. Thank goodness.

And so my stress level slowly started to creep up, no matter how much I reminded myself that he’d be practically two before we had to put him in the bed, and that that was several months from now, and that it wouldn’t be like trying to make a fourteen-month-old sit down and stop bouncing (I hoped), and we could always put Clive in the pack-n-play in our master closet if he was as LOUD of a sleeper as Remy was (oh my good gravy was he ever loud) and hopefully Remy would be ready to move to the toddler bed before Clive was, you know, three years old. Because I’m pretty sure that pack-n-plays have a weight limit.

So this was my state of mind when we were out yard sale-ing this past weekend, about the time we drove through a subdivision having a community-wide sale and suddenly OMG THERE IS A JENNY LIND CRIB THERE AT THAT HOUSE I HAVE TO GO LOOK AT IT.

“Why do we need a crib?” Jeremy asks.

“Because the toddler bed stresses me out.” Crazy pregnant lady. So the crib desperately needed a coat of paint, and after looking through what we already had (and asking facebookers for their input) I decided to paint it blue. It’s actually the same blue that was in the room before we remodeled it, which is kind of ironic, I guess.

We took all the hardware off and I started brushing the crib, which took forever because those little pretty Jenny Lind spindles are so delicate and impossible to paint without it dripping all over the place. So you’re constantly having to watch for drips and correct them before they dry that way. And I mean constantly. The other option was to paint with such a dry brush that you’d have to do twenty coats instead of two. I switched between these two methods every ten minutes or so, depending on how frustrated I felt.

I think I had managed one coat on one side of the head and footboard after a couple of hours of work, when I mentioned to Jeremy that I really wished I was spray painting.

“Yeah, or using a spray gun.” He replied.

That’s when we both remembered that we actually have a spray gun.

If you only glean one thing from this blog, ever, let it be this: only use a spray gun for painting furniture. Ever. We got ours from Harbor Freight for $80.

Things got so easy that I decided to tackle our rocking chair. It’s actually the chair that Mom rocked me in. I decided to paint it blue because it sits on the other side of the room from Clive’s crib, and would balance out the un-matchy-ness of the vintage blue crib.

I hauled it outside and started spraying before I realized, suddenly and with a paralyzing fear, that I hadn’t asked permission to paint it. But it was already too late. Sorry, Mom. I don’t suppose I can blame Clive for this, can I? No? How about Remy?

It took a couple of hours to finished both pieces, the chair and the crib, mostly because it started raining on me twice while I was working. Nothing can deter the crazy pregnant lady with the paint sprayer, though, and both were finished today and hauled back upstairs to their new home. It starts with fists, or grasping things tightly. 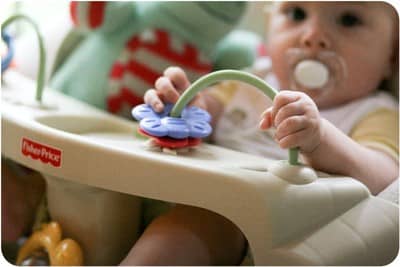 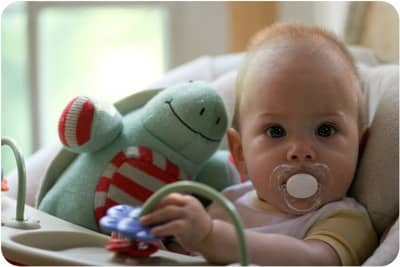 We’re in the swing, but we’re not moving. 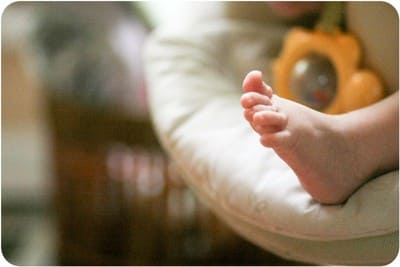 We love the turtle.

We hate the turtle.

Mom, put the dumb camera down, and put me to bed, already!

One year ago, today, I found out that you were growing inside me. I had been so sick for several days, and everything thought I was pregnant and didn’t want to say so; I didn’t want to think about it, either. Not because I didn’t want you–quite the contrary. But I was afraid I’d get my hopes up, and be disappointed.

So I cried all night the night before, and I barely slept. And in the morning I took a test. And guess what? Pregnant.

It was the first positive test I had ever seen!

So I told your Daddy, and we cried together. Then he went to the kitchen and got some oil, and he put it on my forehead and my belly (with you inside) and on the door of the room that you sleep in at home. And he prayed for us, for all of us, that I would be safe and that you would be healthy and that he would be a good Daddy. And we thanked God for you. Amen.

Last year, the family of one of Jeremy’s students graciously allowed us to use one of their beach houses for a week, once school was out. This year, the invitation was extended again. We were staying during the same week as last time: the first week of June. This time around, though, we had added a family member; someone who was almost four month old…who had been born at a little over eight months gestation…which, er, makes twelve months. I’m sure you’re following me.

So Remy’s presence at the house this year was a great source of amusement and awe, joy and jokes for us. We did get a picture of all three of us in the room we stayed in last year. And then we giggled about it. Because we are adults.

Remy enjoyed his time at the beach. I hope one day we can go back to that house, when he’s old enough to understand the significance. If only because I can just imagine the face he’d make when we tell him.

We’re so much more alert now. We stay awake for one to one-and-a-half hours at a time, instead of crashing right after we’re done eating. 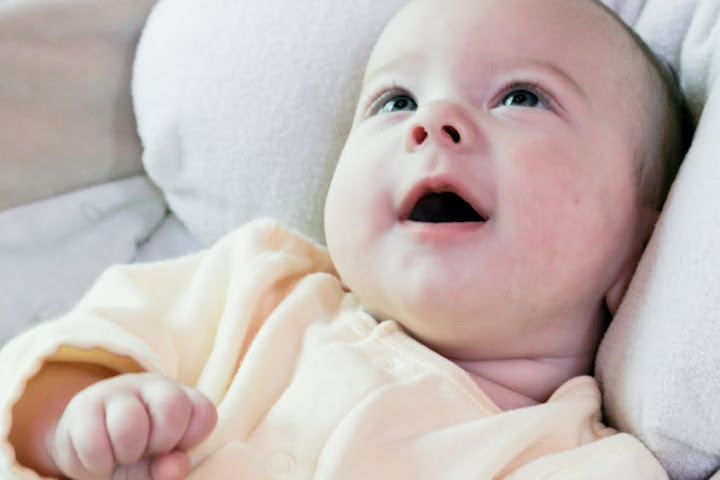 It now takes us 20 minutes to eat instead of 10, since we keep having to stop and talk to mommy between gulps.

It means that most of our pictures turn out like this:

And every now and again we’ll stop talking and smile for the camera. But by the time the camera is ready, we’re already distracted again.