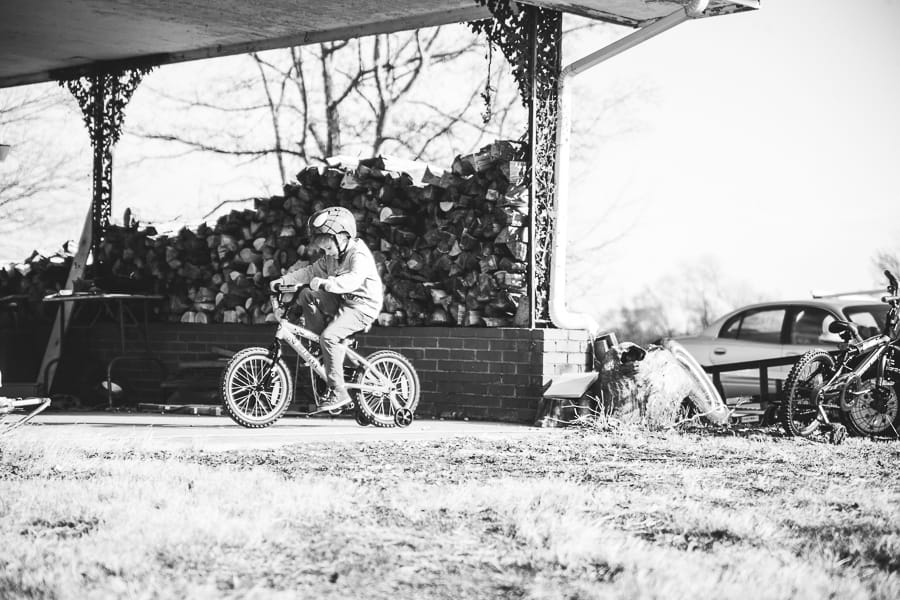 We slept late, this morning, the baby and ourselves. We awoke to a room full of grey light; the misty day after Christmas.

“No it’s not, we still have eleven more days!” I prefer to stick to the old idea of twelve days of Christmas even though our culture does not. Before those twelve days are out Jeremy will be back to work, back to school. We have this week, though.

The clouds broke mid-morning and the sun shone on the field, brown and gold and pale, pale green. When we went outside the wind whipped at us like it always does, but it was a warm wind. Our Christmas Day had been unseasonably warm, a fact which I relished, since it meant the boys could ride their Christmas gifts: a new bicycle for each of them.

We went outside, Jeremy and Pam and myself, as part of a meeting of the Janderhil Committee for Community Improvement and Development. We had spent breakfast discussing chickens and rabbits and bees and the garden, making mental lists and gathering ideas and ideals, long-term goals and goals for the year. Then when Elvie Kay went down for a nap, we stepped outside to ponder the location and size of the garden. We have a lot of preparations to make.

The boys followed us out to ride their bicycles.

I am very guilty of thinking of the boys as a unit. This has happened to me ever since Clive was born. He and Ephraim became “The Boys”, and it was hard for me to remember the age difference between them, not to mention the personality differences. Then Anselm came along and I got even lazier. Watching each interact with his own bicycle emphasized those differences for me, again. 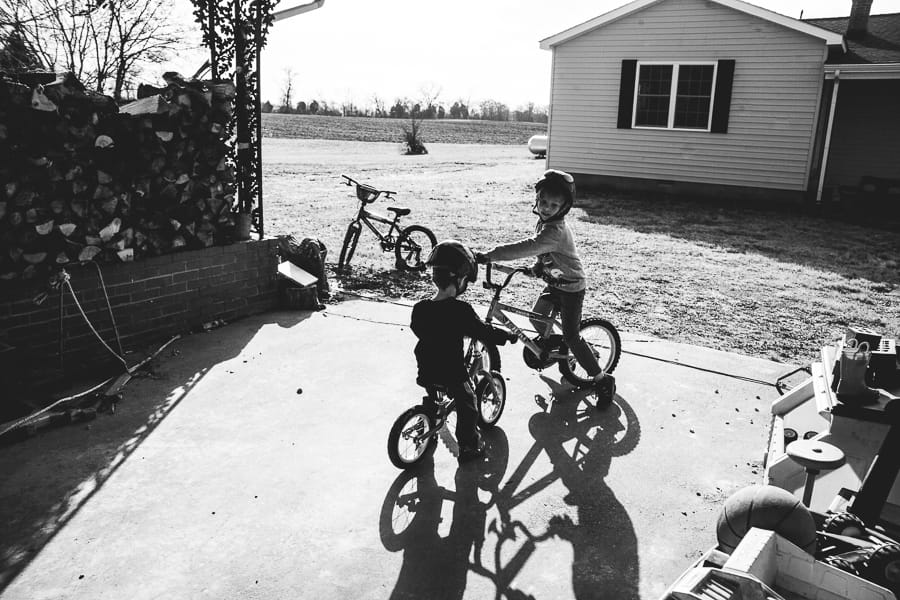 Ephraim is the oldest and the most daring. He also had the advantage of learning on a balance bike. I think he was three, almost four when he started on that balance bike. He would ride it down our tiny front yard in Georgia, which sloped in such a fashion that all the rainwater and trash and silt of the whole cul-de-sac came rushing toward our house every time it rained. And his bike rushed toward the house, too, while he flung his legs out on either side of the bicycle and glided all the way down the hill before thrusting them into the dirt to stop himself just before he hit the flower beds.

Initially we kept the training wheels off of his new bike, knowing that he wouldn’t really need them, but he protested. And he does just fine, really he doesn’t need them, but he is comforted knowing they’re there. He rides around and around and around the carport, just as I did when I was a little girl. Occasionally he shoots out into the yard, though pedaling is tough going. 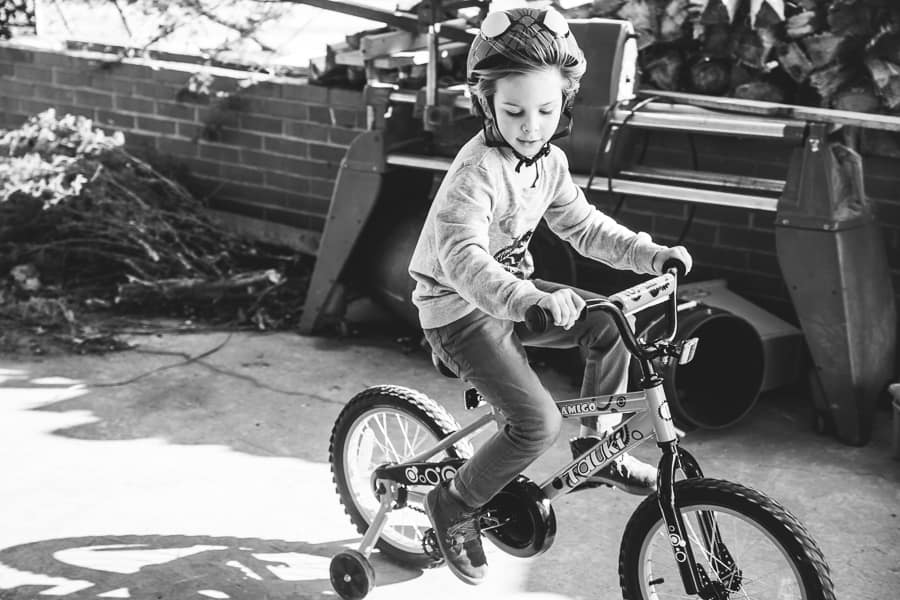 When I watch Clive with his bike, I remember the little eighteen-month-old that would not, would not walk, who would stand but then just crumple to the ground if you let go of his hands. It wasn’t a lack of skill, it was a form of fearful defiance. It takes a lot to deter him from a path his mind is set on; if his mind is set on I can’t do it then he will fulfill the prophecy himself.

It was the pediatrician at his eighteen-month appointment that said his lack of walking was purely psychological, just fear-based. I messaged a group of women who were close to me and asked them to pray, not that he would walk, but that he would be released from his fear. He began walking a couple of days after.

I didn’t think he would be afraid of his bike, but he was. Then that fear compounded after he fell off the first time. Christmas evening he sat of the bike, trembling, because we would not let him give up. It took a while, but he rode, quivering and tearful, from myself to Jeremy and then back, all on his own. Then we let him get down.

The whole bike concept is difficult for him, too, because he never crawled; he has never really got the motion smoothed out even for running. Pedaling has been more challenging for him than it was for Ephraim, but perhaps that’s his age, too. He never used the balance bike, for it was left out in the rain and the wood split apart before it was passed down to him. But this morning, the day after Christmas, he rode around and around the carport, my hand on his back or on the bike seat, guiding and reassuring him. He will do fine. There are no pictures of Clive on his bicycle yet because I am too close to him for pictures when he is riding.

Anselm got a balance bike.  We picked it over a tricycle so that he could follow his brothers out into the field more easily. This one is metal so it won’t be destroyed by rain if it is left out. He is figuring it out, leaving it lying on the ground in frustration and taking two steps away before changing his mind and running back to try again. In a day he has learned to get on and off himself without falling. Soon he will learn to fling his legs up and glide. I am interested to see how quickly he learns. He is several months younger than Ephraim was when Ephraim got his balance bike, but he is full of a pluck that the older boys did not possess at his age, and is very determined when he sets his mind to something.

Last week we went to the indoor playground at the mall, and Anselm determined to climb up on a tunnel that the other boys were climbing. It took him nearly fifteen minutes and dozens of tries, but he made it on his own.

To me, it’s indispensable to me to see how each boy reacts to a challenge, how they deal with successes, whether they are encouraged by triumphs or like to quit while they’re ahead. As I look forward to the coming years and their education, I am taking note of personalities and what kind of motivation each has and needs. They are three very different people, indeed.

what we read (october-november)
a modest update