I bought this journal at a craft market a couple of weeks ago. I declined to write anything in it until I decided what exactly I wanted to put in it. After some thought (and probably too much at that) I decided to use it to write down the poems I’ve written about the kids, for the kids, etc. I don’t have that many, but they are coming to me more frequently now for some reason. They have titles like Pretzel Dogs or Sandbox or Nicknames and while they are generally inside jokes and will never be published, I think they are kind of funny. I will compile them all in this little book, and some day when I’m gone I hope my children squabble over who gets to keep it.

I love the look of it and felt like it needed to be photographed, so I gathered a few things and trotted outdoors to where the light is the best.

First I put down the journal, then added the garland. The felt ball garland I found while on a trip to Hobby Lobby with just Anselm. Just Anselm. I never type that or say that. Usually I always have everyone with me or, if there is just one, it’s Elvie Kay. But last week I was able to go out with Just Anselm and we saw these colorful balls of fluff on a string and were both smitten with them. (He tried to eat them.) We bought them and a bag of chocolate creams–everything chocolate he still calls Chocky-CAH! and now I do too–and we love them (the garland) in the house hanging over the window or in the kitchen or wherever I chance to move them. I’ve ordered three more while they’re still on sale so I don’t have to keep moving our one strand around.

After I took this picture, the garland was so tangled up that it took me about five solid minutes to get it straightened out again. I hung it up in the kitchen. It stayed there for about two days until it got moved into the living room again. I hope my order comes in soon.

Every good flatlay has to have coffee in it, right? Well, mine was reheated leftovers from that morning but I stuck it in there anyway. I didn’t feel like making a fresh pot of coffee (I felt like it would take too long) so I poured myself the half-a-cup left in the french press, put some milk in it, and heated it up in the microwave. There was so little in there that I was really trying to savor it and drink it very slowly. Somehow, though, an ant ended up in it during the course of the photos and then I couldn’t drink it at all. That’s just the sacrifices we make, I guess.

The pencils I found and sharpened just for this picture. I just thought you can’t take a picture of a journal without also taking a picture of something to use to write in it. 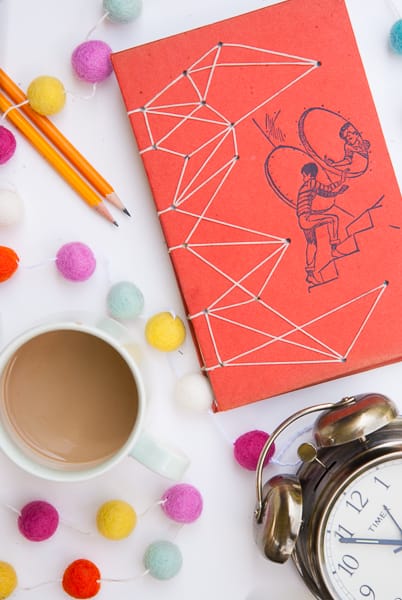 The steps are easy:

Put it all together and arrange it prettily. Take pictures. Haul everything else back inside, dump anted-coffee out in the sink. Upload pictures and photoshop the ant out of the coffee. (I thought about leaving it, but it looked like dirt.)

Write a post about it so you’re sure they don’t.