Saving a spot for sweet Clive Louis–whenever he decides to arrive!

an hour or so outside with Mimi makes for a little boy with a very sweaty head, a dirty bottom, and a good night’s sleep on the horizon. 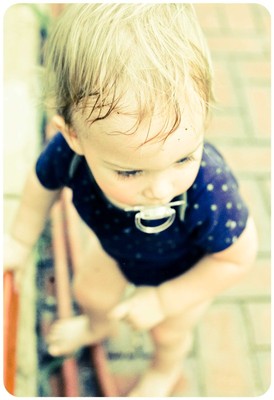 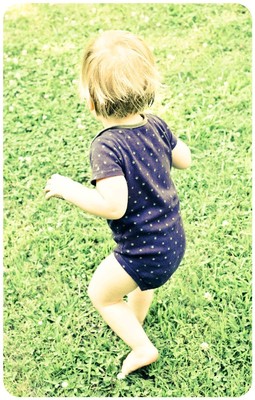 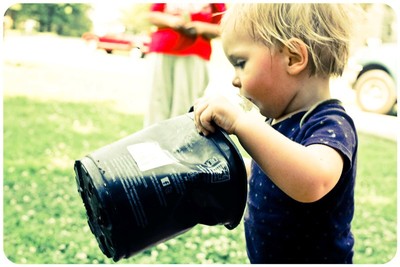 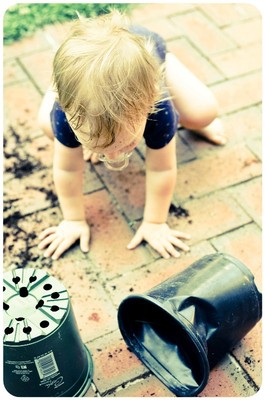 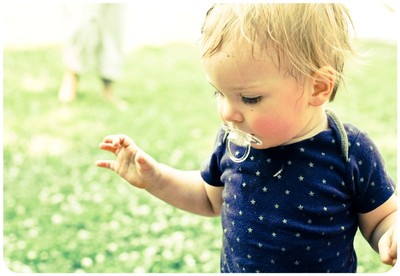 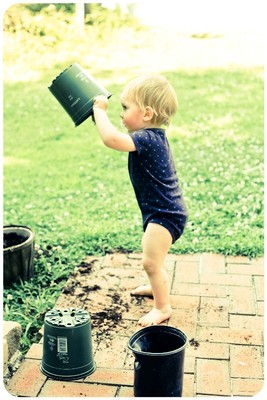 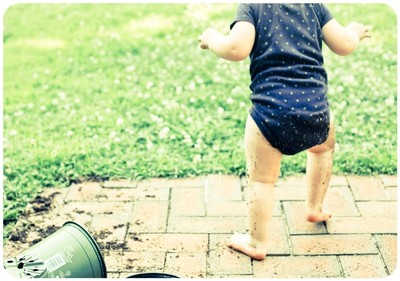 Tuesday found me in the car with my mother-in-law, driving to a nearby town to pick up a rattan ottoman I had bought online for $15. We were talking about this and that, projects and remodeling and re-dos, and I was talking about how my husband and I have a rather bad habit of picking up projects to do, and how I wanted to really curb that, and be more practical about what is and is not feasible before we buy things. The problem is that I really don’t have the willpower to turn down projects, because I can usually easily envision how cool something would be once it’s refinished. But I am trying hard, I said, to learn to say no.

Then I pulled into this lady’s driveway and saw the ottoman she had left out for me.

It was…not in as good as shape as the pictures seemed to show. The rattan on top was missing in places so that the foam underneath showed through. It’s not even something that painting would fix.

I must have stood there for a while, looking at it with a funny expression on my face, because my mother-in-law leaned out of the window as I was rolling it towards the van. “Don’t get it if you don’t want it!”

But I did want it. Sort of. And then, I didn’t. One thing was clear–this was a project. We looked at it together and decided that it could easily be recovered. I felt bad enough about driving all the way out there that I didn’t want to go home empty handed. And I could see what it would look like when I was done with it. If I ever got done with it.

See? Willpower. I don’t have it.

So I stuck it in the back of the van, drove home, and then left it there for a couple of days while we contemplated fabrics. I wanted something light and simple, since the living room is pretty busy with its bookcases and brocade and whatnot. We found just what I was looking for at Joann’s, on clearance for $9/yd, which turned into $4.50/yd with the help of a 50% off coupon. 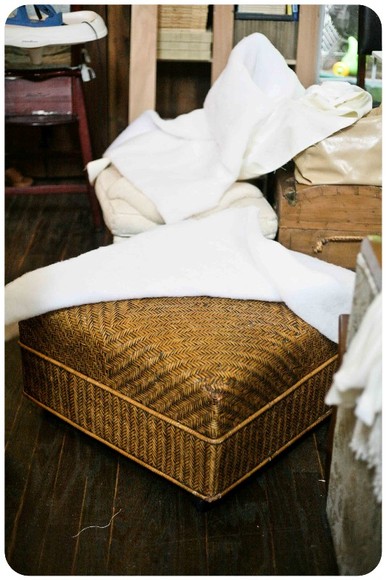 I added some batting on top so that it wouldn’t feel like you’re resting your feet on fabric-covered-rattan. I used hot glue to fasten it down. This was going to be a fast project. 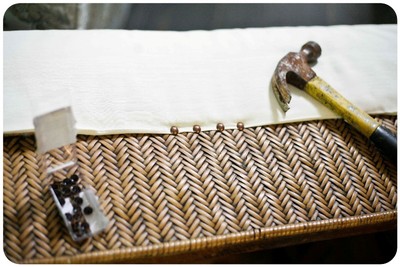 Since the ottoman had a wood frame underneath, it was really easy to just tack the fabric down. 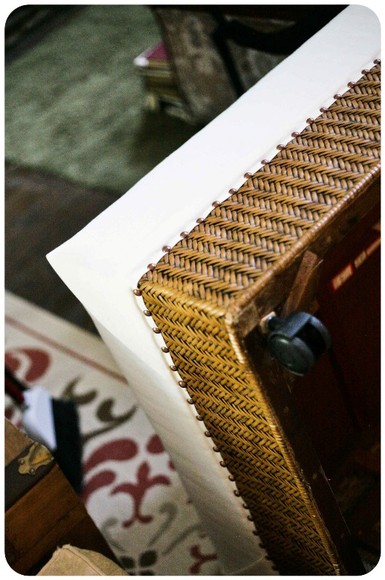 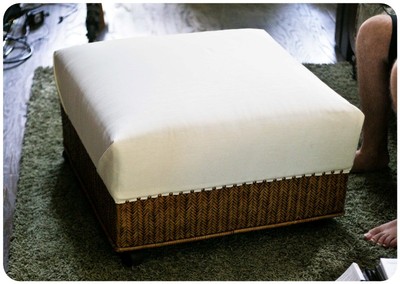 All done and Scotch-Guarded. A project completed in one Remy Nap. Now I don’t feel so guilty about not having the willpower to leave it on the previous owner’s porch. 🙂 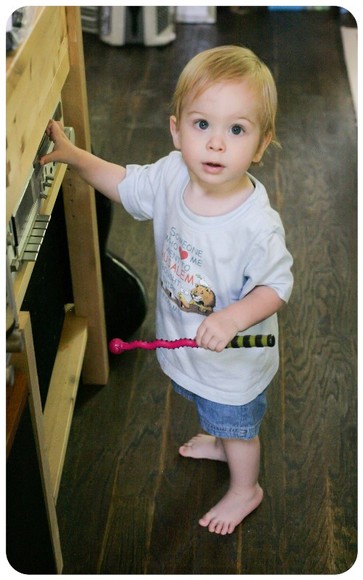 Busy, busy, busy. Learning boundaries and to obey Mommy.
Has developed a real love for Mommy’s stuffed kitty.
Loves to pretend to “snooze” and to lounge on pillows. 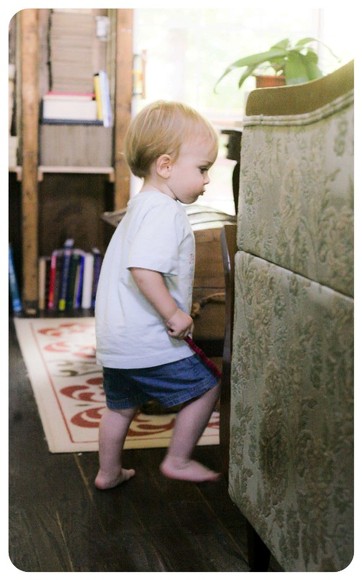 Likes to play chase.
LOVES to be read to; has started “reading” to himself and to Mommy.
Is somewhat over the novelty of putting things in holes.
Strangers comment on how tall he is for his age. 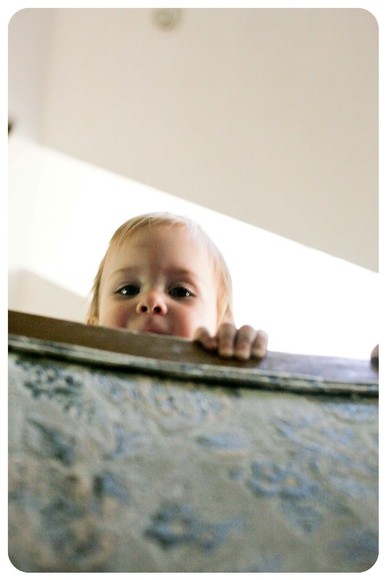 Is suddenly ticklish.
Faces forward in the car.
Got his tongue “fixed” and can finally blow raspberries with it.
Loves to be outdoors; a little gardener-in-training. 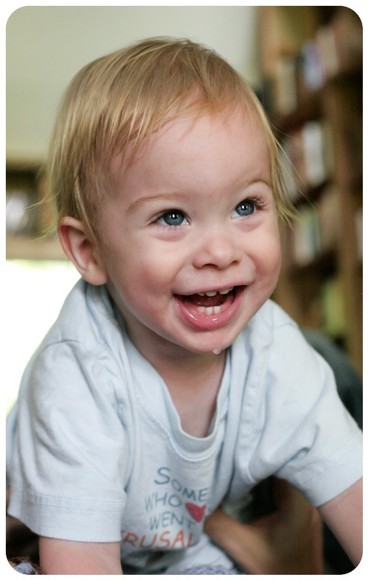 Eleven teeth (seven in the front, four molars.)
Favorite food is Greek yogurt with fruit.
Has mostly grasped to be gentle with the cats.
Not a baby, anymore. 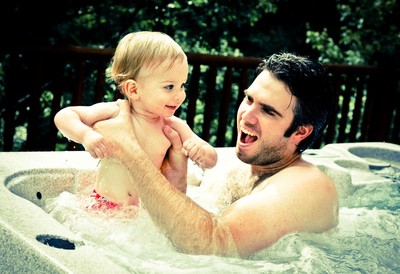 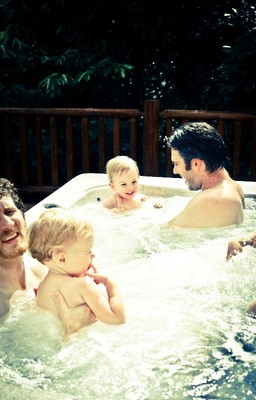 Remy’s first time in a hot tub. Which wasn’t really hot–so more of a lukewarm-tub. 🙂