As I mentioned in his fifteen months post, Remy has been all about sticking things in holes lately. He’s been ignoring most of his toys in favor of just a few that involve this new favored activity.

(As a side note, I was mentioning this on the phone to my mom when she reminded me, “Be careful, this is when you’ll start losing things.” Uh-oh, as Remy would say.)

I ran across this post by Sue from Bloggin’ About Babies and was overjoyed when I realized I had everything I needed to make this activity. Well, I didn’t have any round-head clothes pins, but I did have some plastic bag clips (is that what they’re even called? I can’t think.) from IKEA. It took me two minutes to grab an empty coffee can, cut a square hole in the lid, and fish all of those little clip thingies from the silverware drawer.

I set them in front of Remy and showed him how to stick one of the clip-gadgets through the hole. It made a lovely clang as it fell in. That’s all it took–Remy essentially pushed my hand away to try it himself, and then happily kerplunk-ed his way through the next forty-five minutes or so. He stopped only to pick up the can when all of the closures were inside, and to shake it at me with an earnest look on his face that said, “Hey! Dump these out so I can do it again!” 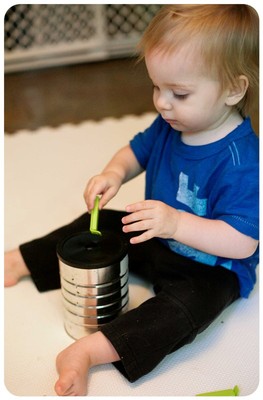 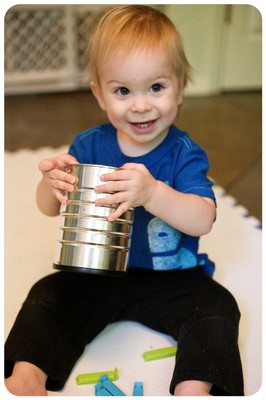 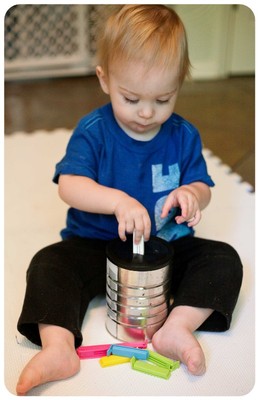 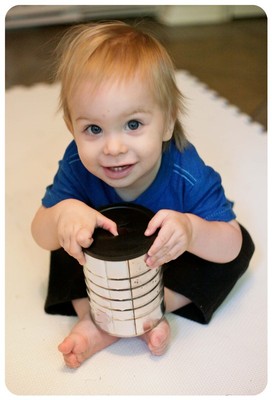 We found this chair at an estate sale a couple of weeks ago. There was a marriage taking place, and a subsequent blending of households, and consequently a great number of rugs, decorative items, and furniture was being hauled off.

This chair was half-wrapped in plastic, and had a tag with $60 on it. It was an ornately carved arm chair with an enormous matching ottoman, the upholstery of which has clearly seen better days.  It was apparently greatly loved by a dog who found much pleasure in laying his head on the left-hand armrest and chewing on the carved wood. (Just a guess.)

This chair needed TLC (otherwise known as a Rug Doctor with an upholstery attachment, some sandpaper and stain, or maybe even an entire reupholstering job.) But I moved a little bit of the plastic aside and sat in it. Oh my heavens. This was probably the most comfortable chair I have ever sat in. And at 26 weeks pregnant, that was saying something, for me. There’s not a whole lot of places I can sit and actually want to stay in, these days.

Jeremy saw my look and asks what I would pay for it. (I hate this part of yard sale-ing.) The chair is amazingly comfortable, but it is super dirty. And I don’t need another chair. So I said $30–half the asking price. It’s still before 12 p.m. and there are several other people there, so it’s unlikely the seller will agree. So I made Jeremy ask, since I am really paranoid about the haggling process, still, and hate to be rejected, even if that’s sort of what I’m aiming for.

Jeremy asked, and the seller agreed immediately, and both of our faces kind of fell–Jeremy’s because he really wanted the seller to say no, and mine because I’m now kicking myself for not saying $25, or maybe even $20, if he was that eager to get rid of it.

We brought it home and unwrapped it, and I was pleased to see that the only awfully dirty places were the places you sit (or lay your head, if you’re a dog.) So I threw the cushion covers in the wash for a couple of cycles, and they came out looking almost new. The fabric on the armrests and ottoman will still need steam cleaning, but at least I could stop looking up “how to reupholster a chair” on Google. 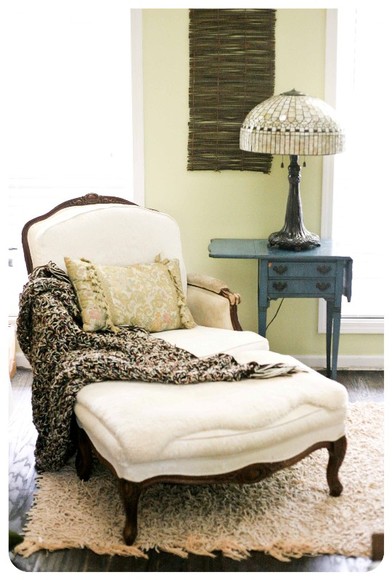 I’m glad we got it. It’s certainly the most comfortable piece of furniture I’ve ever owned. The best seat in the house. If you come over, I’ll fight you for it. 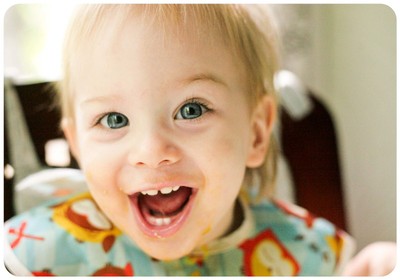 Walks like a pro, falls like a champ.
Makes a weird squeaky sound with his pacifier when he’s amused or excited by something.
Thinks it’s HIGH-larious when Mommy imitates said sound.
Loves chase games, sticks, the cats, and putting things in holes.
All-time favorite game is to see how much of something he can hold in one hand. 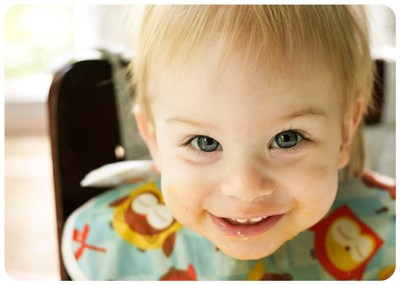 Says juice, boo, ball, thank you, uh-oh, daddy, Mao.
Has a whole arsenal of frequently-used words that Mommy has yet to decipher, including dis, jesh, and something that sounds suspiciously like “love you.” 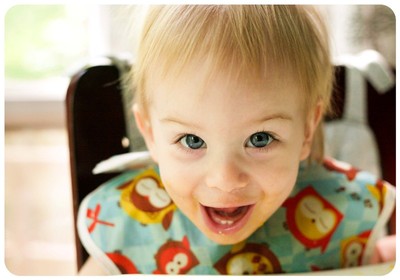 Has definitely figured out what the camera is.

Remy’s been somewhat under the weather for the past few days. This of course means that Mommy has similarly been under a cloud of worry.

We’ve done high fevers before. We just haven’t done high fevers with nasty coughs for several days while extremely lethargic and refusing to eat or drink that then turn into full body rashes. 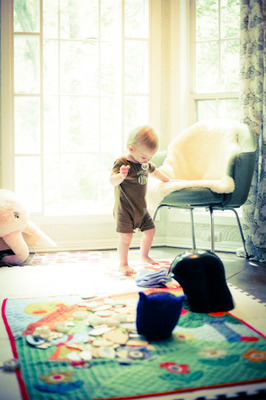 He’s spent the better part of the past three days in his crib. His choice. I would come in, check his temperature, give him more medicine if needed, force him to drink something.  Then he’d point back to his crib and I’d lay him down again. Sometimes when I went in he’d be asleep. Sometimes he’d just be lying there.

He must have done a lot of thinking during that time. This morning I slept late, and when I woke up went in he was already sitting up in bed. He took his pacifier out, pointed to his drink cup and said “Juice!” That’s a first. You better believe he got that sippy, and he gulped about half of it.

Remy is a chatterbox, and talks incessantly, but he doesn’t usually do a whole lot of direct communicating (other than “light”.) Even getting him to sign has been a bit of a pain. So things like pointing to his crib, actually asking for juice…these are new. 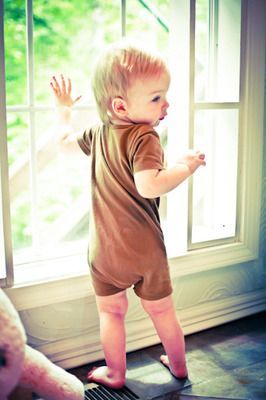 After Daddy came home tonight, he surprised us again by saying our cat Mao’s name (which sounded like “ow, ow”) and “ku-ku” when I asked if he wanted to see the cuckoo clock. 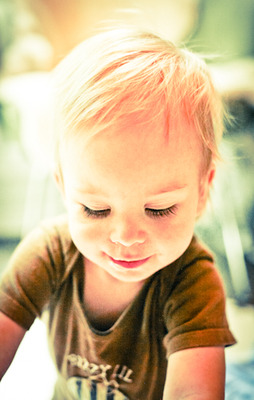 Maybe we should get sick more often…?

We have a breakfast nook right next to the kitchen. The poor thing is constantly having a bit of an identity crisis.

Back in the day, it was just a plain old breakfast nook. It had a table and chairs. Sometimes it had a rug (when the rug wasn’t traveling around other rooms.) Then, one day, everything changed.

We had a baby.

I spend a lot of time in the kitchen. I guess most women do. When Remy got a little older, I realized I needed someplace where he could play while I was working in the kitchen. So, I moved the breakfast table and chairs into the living room, and made the nook into a playroom of sorts.

Then we sold our baby grand piano, and I moved his play area into the huge void it left in the living room. So then the nook-turned-playroom became the place where I put my old digital piano, and there it stayed for a while.

In February, I moved the digital into the dining room (where all the music pictures are, anyway.) and turned the nook-turned-playroom-turned-music-room into a sitting room of sorts, where we usually had breakfast. I loved this incarnation. I still do–but I must use the past tense, because as of today, the nook-turned-playroom-turned-music-room-turned-sitting-room is getting a turn as a playroom again. I have mixed feelings about it; I’ve been contemplating it for at least a month. I really, really didn’t want to give up my sitting room, but I feel like it needs to be done. Here’s why:

1) The only “playroom” Remy has downstairs is a sort of pen we set up with some grey child gates that we have. It suits its use perfectly. The problem? It’s ugly. And it’s in the living room. And it’s big. And in the living room. And he really only spends maybe 1.5 hours in there each day. It was incredibly useful, particularly when I needed a place to put him where he couldn’t get into things. But I hated looking at it. I mean, really, really hated.

2) When we added the bar to our kitchen, we put drawers facing on the nook side for some extra storage. Remy loves those drawers. He’s allowed to get into most of them. So–perfect place for some toy storage.

3) The bookcase-door to the basement is full of kid books and toys, anyway. So we’re halfway to a playroom in there as it is.

4) The nook is easy to block off, so it still gives Remy a place to explore without me worrying what he’s into. A place that’s not a big, ugly eyesore. 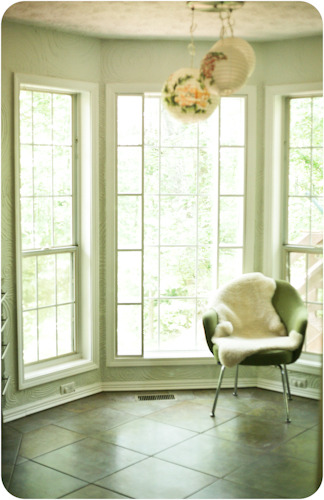 Which means the rest of the house looks like this: 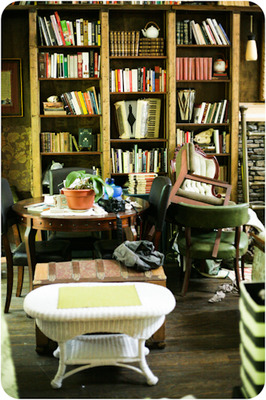 Which is all just part of the process of the Perpetual Switch.