Five months for Darling Beatrice, the sweetest baby at Janderhil. (She is also the only baby, but that is neither here nor there.)

Her nickname has migrated from Beada to Deedee–this is Eldore’s fault, though he can hardly be faulted for it, as he only expresses the love we all feel but with a toddler’s characteristic disregard for inhibition. He loves his Deedee to distraction, wanting to show her toys, kiss her, sing to her, or squash hug her while she’s trying to practice her Tummy Time. She is, perhaps unsurprisingly, extraordinarily patient with his affection.

At any rate, Eldore clamors for his “Deedee” and Mama has started using “Deedee” back to him, and now we’re all calling her that as often as anything else. It seems the babies in our family are destined to be given family nicknames by whichever child is youngest (this is also how Clive became Tiggy and Eldore became Dodie) but as these nicknames are consistently dropped by age four to five I will not worry too much about it.

Beatrice is pleased with the attention; she loves to talk, especially to other people, though she will talk to herself in a pinch. She has become adept at exploring all sorts of vocal possibilities, from crowing to growling to caterwauling. I love to hear her do it, except, I confess, when she wakes in the middle of the night and sings to herself. She seems more likely to caterwaul when she’s looking at an interesting toy or when she is lying in the dark looking at nothing at all.

It occurred to me this month that I’ve not done anything to try to wean her of pacifier use as a “sleep prop”. I am not sure I will. It may make our nights more fitful for a bit…or it may teach a thumb-sucking habit I’ll have to break in a few years. On a related note, her one pacifier that we do have (I bought her two, and we promptly lost one) has got a little hole or something in it so it squeaks when she sucks on it. Squeak, squeak, squeak. It’s funny. I suppose that means I’ll have to replace it soon.

I’ve had to move her schedule so that she’s waking at five a.m. and going down for the night at five p.m. Previously she had been waking around six a.m. and going down at six p.m., except she wouldn’t actually go down at six but would cry promptly at six-thirty every evening, just as I was about to sit down to dinner. (Literally. As soon as I would sit down to eat.) Since it is a deeply held personal belief of mine that the Mama should be able to sit and eat the food she has just prepared while it is hot, this habit, while amusing, could certainly not continue. Thus the schedule shift took place, and so far it seems to be working rather well.

She doesn’t mine lying around looking at toys too much, but if you pick her up, she must be able to sit up and look around; she will not lie back in your arms and relax. She’s pretty good at sitting herself up (in an effort to not lie back and relax in your arms) and actually sat up herself in the boppy pillow the other day for quite a bit. I expected her to fall over almost immediately.

Beatrice is extremely sociable and talkative, but she is not so cuddly. At least, she rejects nearly every opportunity for cuddling with Mama. Maybe it’s just me. But she will happily sit beside you and talk and look at things and play peek-a-boo and maybe, maybe, if she is extremely tired she will lean her head against you, and she can be rocked to sleep in spite of herself. I rarely wear her in the baby carrier as she really does not like it very much, unless she’s in it in a fashion that allows her to sit up and look around.

Her ears seem to have settled down; well, they still stick out, but they’re not rolling up as much. (Perhaps she read her last update herself and that’s why she doesn’t like to be held like a baby–because it made her ears into little burritos.)

Beada, Deedee, Itty-Bitty Beadie, we sure do love you lots. 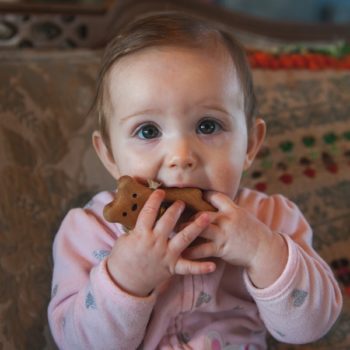