The biggest surprise of my Christmas morning was the fisheye lens waiting for me under the tree. It’s been great fun practicing with it over the past few days.

There was a kitty in this chair when I went to take the picture, but she quickly hustled out of the way when she saw the camera coming.

Somewhere there exists a picture of my infant father sitting in this chair. I believe it was painted red at the time, though. Other than its history, I believe my favorite thing about this little rocking chair is the slightly cockeyed ladder back. There’s a story there, I’ll wager.

When making the list for Clive, I listed moving the closet last, probably because I thought it’s what would take the longest.  I was moving Remy’s things from his previous nursery closet to the new nursery closet, which was probably half the size. And Remy’s closet was full. Not that I actually used all that stuff in there, but it was still full. To make matters worse, the guest bedroom (now nursery) closet was full, too. 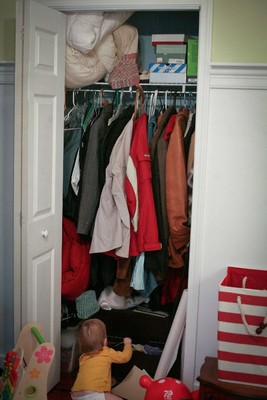 This closet was purged and organized before Remy was born, too, which should give you terrifying idea of what it looked like before then.

Here is the after: 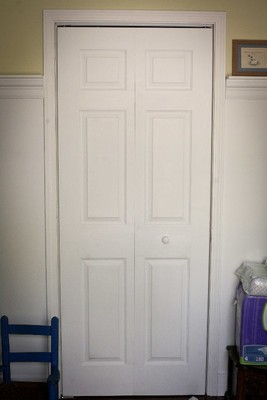 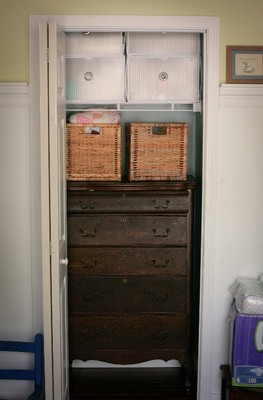 While I thought the move would take the better part of a day, it really only took an hour or so. I actually only moved the stuff that Remy really used daily, which was clothes (already in the dresser, which I just pushed down the hall) and the things in the white boxes (bibs, extra packs of wipes, shoes, sheets & things.)  The baskets are the IKEA ones that I had wanted to paint, but was talked out of changed my mind. Since the other closet was, as I said previously, twice the size of this one, all the things from this closet fit just fine over there. Hopefully soon that closet will get a thorough go-through, but for now it’s just fine.

Another thing crossed off the list! That, along with finally moving Remy’s crib, means that I don’t have too terribly much left to do. Which is good, because I’m already scheming about the former nursery-turned-guest-bedroom. And I have the feeling I’m going to need a list. *not the bathrooms. Or the guest room. But everywhere else. Like a man stuffed with straw set in a cornfield, or a plastic owl on a building’s roof, I set my dining table to keep all sorts of messes from coming to roost.