I used to love working in church nurseries. I can recall being twelve years old, roaming the children’s wing at the Baptist church we attended, stopping to poke my head through the door of the infant room, toddler room, preschool room, asking if they needed an extra pair of hands. I was usually recruited in the toddler room, though, and more often than not it became my specific duty to watch after Trevor.

Trevor was a sensitive soul with a touch of separation anxiety. In other words, he had to be held. The entire time. So I held him. The entire one-and-a-half-hours of church service. My skinny little twelve-year-old arms carted him around the room, and sometimes up and down the halls, until his parents came to get him. And then my arms felt like wet noodles for the rest of the day.

When Remy was born, I was really worried of creating the “can’t-put-me-down” monster in my own child. I wasn’t sure how much was nurture and how much was nature, but I knew I at least wanted to be careful. So I made it a point of putting him down, on his own, at least as often as I was holding him. 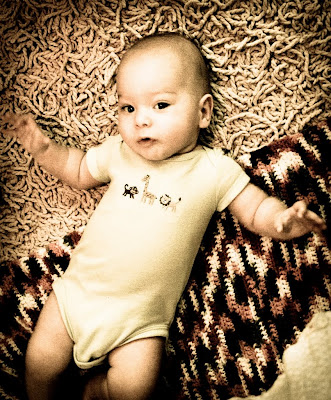 I think I can safely say that I have, thus far, avoided the behavior I worried about. The only problem is that, now, I have seemed to have accomplished the opposite.

Remy is not a very snuggly baby. He is when he’s tired, but not when he’s too tired–then he just gets angry if you try and rock him. His favorite place is on the floor, all stretched out. Or on the changing table. But mostly the floor. Oh, he’s content to be in someone’s arms, mostly. But he really lights up once you set him down.

In the end, I have no regrets, though. He may prefer the floor to my arms, but he still wants me there to talk to him. 🙂 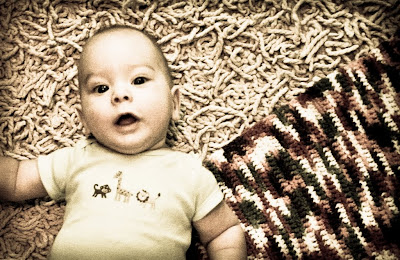 *this post is mostly tongue-in-cheek. If you ask my mom (or any family member) they will tell you that I wasn’t exactly a snuggly baby, myself.

It’s evening now, and I’m sitting near the kitchen with all the lights off; all the better to see the sky outside going grey. The leaves on the trees in the backyard are nearly fully out, which means soon our neighbors’ windows will be blotted out, and between the owls and the squirrels and the occasional opossum, it’s easy to glance out the back and imagine we live alone, in a forest somewhere. Then the neighbors drive up, with their gangster music blaring, and the illusion is shattered. Oh well!

Remy will be two months old tomorrow. I am beyond enjoying my role as a stay-at-home-wife-and-mother, though I have found I have to stay busy in order to not feel like I’m taking advantage of the position. Somehow, in the bustle and routine of the schedule, I have found my creative streak again. Or maybe it was taking up word puzzles again that did it–or, perhaps, my promising myself that I wouldn’t get on the computer when Ephraim is awake, which gives me plenty of time to think aloud to a most willing (and adorable) audience.

I’ve got a goal for myself: to get my Etsy site back up and running by the end of the month. I think I can do it…I think I can…

I just realized I’ve been parked on the sofa for the past two hours. Remy is sleeping soundly in the swing next to me, and I’m trying to decide what task I’m going to dedicate the day to. Then I see the clock; it’s almost noon. Seven hours of my day are practically gone. Is it too late to make a to-do list?

I’ve checked facebook and designsponge and my e-mail countless times. I’ve looked at houses under $50,000 in Franklin and Russellville and Auburn, Ky. I’ve compared the headlines on the Fox News website to those on CNN’s. (You know I’m really stalling when I do that.) I’ve looked up silent reflux in infants, and photos of the tsunami and earthquake in Japan. I read webcomics on Deviantart. I hate the Internet. I love the Internet.